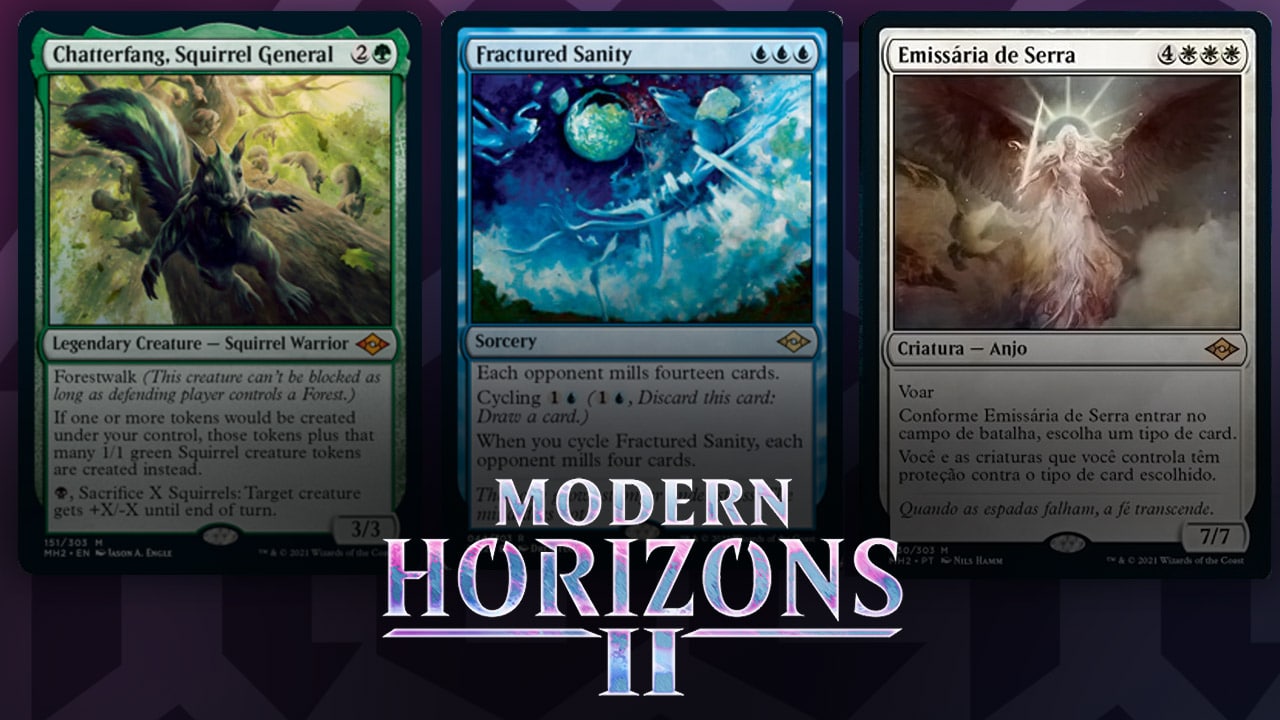 With Modern Horizons 2 previews starting in earnest this week, we’re expecting to see a lot of exciting new cards for us to soon get our hands on. We’ve already seen some pretty cool new ones thanks to the cards revealed so far, but we’re always hoping that the best is yet to come.

While we’ve had some new Legendary Creatures already printed, along with the incredible Counterspell, it’ll be really interesting to see exactly what else the set can bring. Well, we’re nearing the end of today’s spoilers, so we’ve decided to highlight some of the best spoilers from today.

Taking the charge in today’s previews is Chatterfang, Squirrel General which is guaranteed to see play in Commander at least. It’s unsure whether the Squirrel Warrior will see play in Modern, but players are sure to try it out as the tribe now has a two-mana value lord in Squirrel Sovereign. Maybe we’ll see more Squirrel cards that will reinforce the tribe later on this week!

It’s interesting to see Squirrels fall into the Golgari color pairing with an emphasis on sacrificing to grow your threats. This is sure to make an interesting Limited archetype in Modern Horizons 2 and will be well-received by players.

When Serra’s Emissary enters the battlefield, choose a card type. You and creatures you control have protection from that card type.
7/7

Serra’s Emissary is one of the White mythic cards previewed today. And while it may not show up in Modern much, it could have a home in Commander. Alongside Unburial Rites and Unmarked Grave, it could give birth to a reanimator-style strategy in Modern. Granted, you already have Iona, Shield of Emeria which already shuts out any interaction the opponent may have. Also note, Serra’s Emissary isn’t Legendary so you run multiple at one time naming different card types.

Rounding out today’s previews is Fractured Sanity, a card that is likely to slot in Mill archetypes. Milling away fourteen cards is a lot, and you have the upside to Mill for four through cycling. Even better, it evades tricky enchantments such as Leyline of Sanctity so you can carry on milling. The triple Blue mana cost may be difficult to run in traditional Dimir Mill, but it’s a slam dunk in budget Mono-Blue Mill decks.

Going further, the Sketch frames offer a unique take on MTG cards. It seems these include the first iteration of the art before the final piece. Even the flavor text suggests the brief from the art director about the card in question. This is a really flavorful way to see how the art develops through these cards and insight on the process overall.

That’s it for today, which card has you the most excited so far and what reprints are you hoping to see?