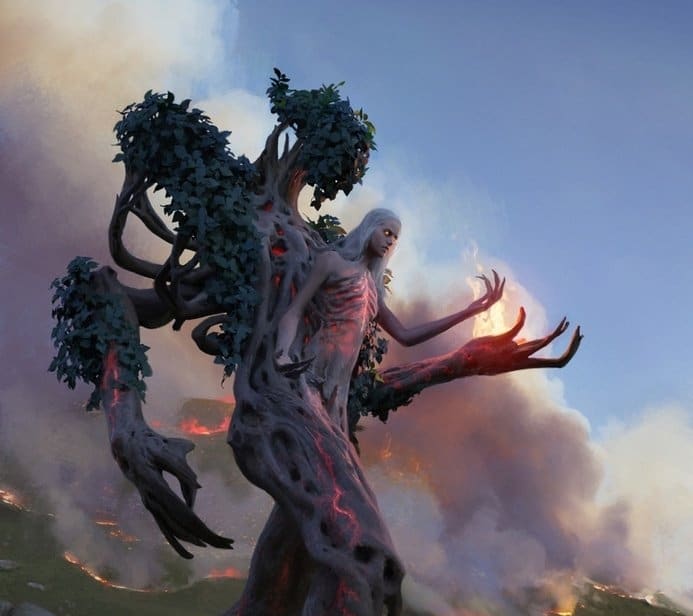 Modern may be the best MTG format at the moment. With a ton of different viable decks (especially in comparison to other formats), Modern offers a profound experience that can’t be learned with a few games. The decks in this format are complicated, and all attack the metagame from different angles.

Up to this point, the shape of the Modern metagame, in a snapshot, seemed to be such:

The three best decks in Modern are as follows:

Recent events prove that this thinking is outdated. Four Color Elementals is widely considered the best deck in the format. Its dominance is alarming enough that players are starting to hear whispers of bans being needed. Other relevant decks included Modern Rhinos, Hammertime, Burn, Scapeshift Combo, Amulet Titan, and Yawgmoth Combo. The viability of these decks is unquestionable, but their standing in the meta has varied week to week.

The recent statistics from mtgmetaio of the Dreamhack Modern $10K from this past weekend tell a different story:

Jund Midrange had a breakout performance at the recent Dreamhack $10K. They had the best matchup statistics and took two of the top eight spots, finishing fourth and second. The sample decklist below is from TargetPlayer, who took second overall at the event:

Jund displayed a favorable matchup spread against most of the field, with Hammer Time looking like the only main deck that gives this archetype trouble. Notably, this deck has a zero percent win rate against Burn and UW Control, but the sample size only includes one set. More data is needed.

Jund Midrange is a deck that wants to play fair MTG. There are no gimmicky combos here, just a bunch of potent cards that aim to beat other fair MTG players and can disrupt those who aren’t playing fair.

In the end, Jund Midrange went down to four color Elementals in the finals, once again securing its spot for best deck in the format. The four-color Elementals deck dominating Modern up to this point is classified as ‘Blink’ in the data shown above.

Interestingly, Rhinos and Hammer Time had a great showing. Hammer Time, in particular, sported the third-best win rate with the second highest sets played. One list cracked the top eight for Hammer Time, while Rhinos did not see any top-eight performances. The Hammer Time list is included as a sample below:

This take on Hammer Time is pretty standard. As the meta has evolved, Hammer Time needed to grow to meet it. The deck has a fast plan with pieces in the sideboard to push its plan through targeted hate. To summarize the deck quickly: use cards to find Colossus Hammer. Ignore its high equipment cost by using cards like Sigarda’s Aid or Puresteel Paladin. Swing with a gigantic creature as early as turn two.

Buy At TCGPlayer
Hushbringer is not a usual creature in these decks but is very good here. These stop triggers that are caused by creatures entering the battlefield or dying. With the best deck in the format essentially being an Elemental Blink deck, it’s obvious what this card is intended for.
Buy At TCGPlayer

The issue is that cards like Hushbringer can be a double-ended sword against the Elemental deck. All the elementals featured in the Elemental Blink deck have the option to pay their Evoke costs, essentially becoming a free spell. Generally, these elementals would get their ETB effect and disappear, but Hushbringer reverses the script. Elementals will not get their ETB effect, but they will stick around after being cast for free. This, therefore, turns what are essentially removal options for the four-color Elemental deck into free threats. Also, remember that your Hushbringers will shut down your Stoneforge Mystics, so be careful of that.

This shouldn’t matter much if you’re going face with an 11/12 lifelinking flier. This deck’s success suggests that this trade-off is worth it, and it’s not that hard to believe. No Hammertime player wants their potential turn three win condition taken off the table.

This Hammertime list has tools to deal with other popular decks as well. Lavinia, Azorius Renegade will make your Living End opponents furious. Since they aren’t paying any mana to cast the win condition, Lavinia will counter it. This also lines up well against four-color Elementals. Evoked elementals will get countered before their ETB abilities even matter.

As mentioned before, Blink on the mtgmetaio stats provided above refers to the typical four-color elementals list that we are so familiar with. This deck rounds out the four overperformers for the event. Meanwhile, Living End did fine, sporting a 50% win rate across the board, but UR Murktide did not. The overall win rate for the deck was a disappointing 46% while having the largest sample size of the whole tournament.

Finally, the top eight decks that weren’t mentioned in this article are rounded out by a UB Mill deck, two Yawgmoth Combo decks, and a Scapeshift Combo deck. You can find all of those decklists here.