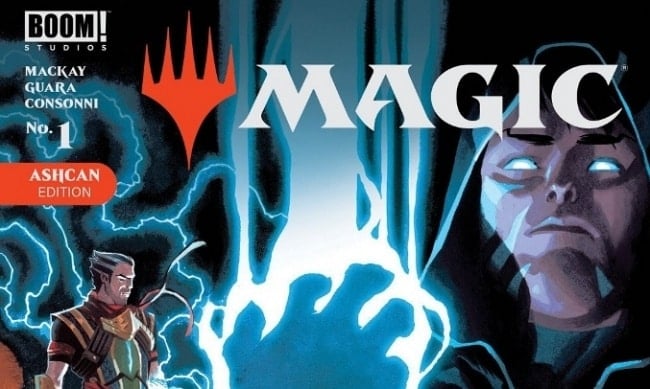 Magic: The Gathering Ashcan Comic Will Be Sneak-Published This Week

Magic: The Gathering Ashcan comic is coming this week!

Back in January, BOOM! Studios announced that they’ve acquired the comic book license to Magic: The Gathering from Hasbro and Wizards of the Coast, and that they will be releasing their first MTG comic this April, titled Magic, by Jed MacKay, Ig Guara, Arianna Consonni, and Ed Dukeshire.

While fans will have to wait a few weeks before they can get their hands on the first issue of Magic, BOOM! Studios will already be sending one copy of a special preview of the series, a Magic: The Gathering Ahscan, to every comic book store. Advance copies have been listed on eBay for up to $170, but none have sold at the time of this writing.

You can check out the cover for Magic: The Gathering Ahscan below:

You can check out the preview below:

“Across the vast Multiverse, those gifted with a “spark” can tap into the raw power of Magic and travel across realms — they are Planeswalkers. When coordinated assassination attempts on Guildmasters Ral Zarek, Vraska, and Kaya rock the city of Ravnica and leave Jace Beleren’s life hanging in the balance, a fuse is lit that threatens not just these three Guilds, but the entire plane of Ravnica. Now these three must covertly infiltrate the wild plane of Zendikar and form a tenuous alliance to uncover why the targets of the assassins have all been Planeswalkers. . . which will lead them straight to one of the most enigmatic characters in Magic history!

Magic will be the first comic book project announced for BOOM! Studios as they took over the Magic: The Gathering comics license from IDW Publishing, which published various MTG comics miniseries between 2011 and 2018.