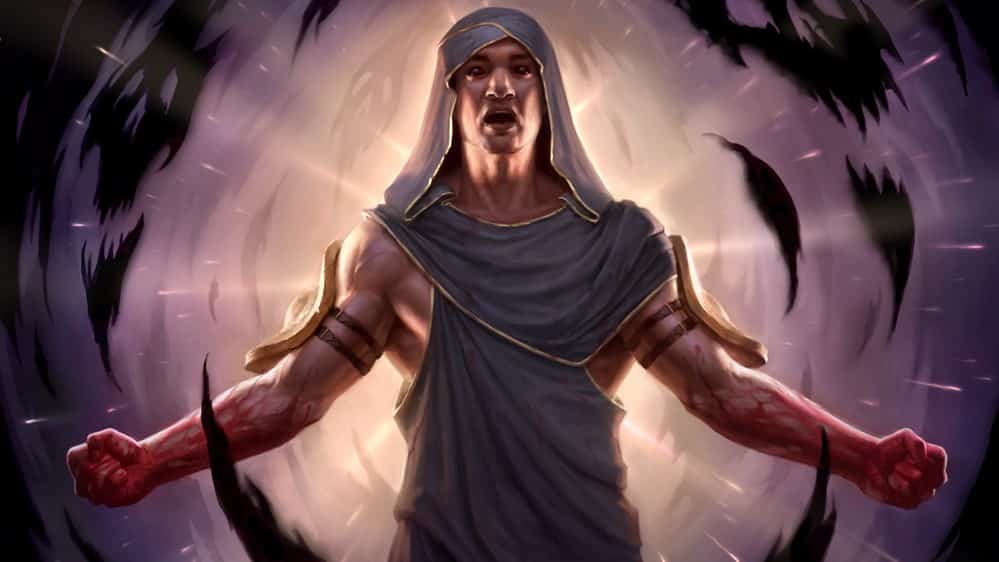 Kamigawa: Neon Dynasty Is Going To Give This Commander A Huge Boost

It’s 2022 and we’ve got a mind-altering number of new sets and MTG products ahead of us, so it’s fair to assume that no matter which commander you choose, you’ll be able to upgrade your deck a little this year.

However, even with the small handful of spoilers we’ve seen so far, it’s already very clear that one Commander, in particular, is going to see a huge boon thanks to our visit to the realm of Spirits and Ninjas in Kamigawa: Neon Dynasty.

Prosper, Tome-Bound is a four-mana black and red 1/4 with deathtouch. They were part of the Adventures in the Forgotten Realms Commander decks, and they’ve been fun to play with anyway. They’ve got two abilities, the first allows you to exile a card in your end step which you can play until the end of your next turn, and the second allows you to create a Treasure token whenever you play a card from exile.

The theme of playing things from exile has been around for a while in MTG, but it feels as though it got a huge boost in 2021. It’s no longer just a nice bonus, but something you can actively benefit from doing aside from the fact that it always avoids hand disruption. It’s something that is absurd when combined with cards like Wild-Magic Sorcerer. It’s not even just in black and red, as you can see when looking at Spirits like Bell Borca, Spectral Sergeant.

If you’ve already been dabbling with this way of playing EDH, then you’ll be happy to know that it doesn’t look like Wizards are abandoning it any time soon. In fact, it looks as though Kamigawa: Neon Dynasty will be bolstering this strategy even more.

Read More: Congrats To Emrakul For Becoming A Ninja

We’re very early in the preview season, but we’ve already seen two new legendary creatures that are going to boost the power level of dear Prosper. It’s not often we see cards so obviously geared towards a specific strategy in the first batch of cars though, and it’s kind of exciting, and makes for a great time to pick up a copy of Propser while you can.

First up is Hidetsugu, Devouring Chaos, a four-mana 4/4 with two abilities. The first allows you to sacrifice a creature to scry 2, which only costs one mana to activate. The second ability costs three mana to activate and you have to tap Hidetsugu to “Exile the top card of your library. You may play that card this turn. When you exile a nonland card this way, Hidetsugu, Devouring Chaos deals damage equal to the exiled card’s mana value to any target.” Effectively, you not only get to draw a card here, but also potentially kill off a troublesome target.

The other card is Atsushi, the Blazing Sky, a four-mana 4/4 with flying and trample that has two abilities when it dies. It can either exile the top two cards of your library to allow you to play them before the end of your next turn, or create three Treasure tokens. These are both in line with what you’ll be doing with Prosper anyway, and it can only be a sign of the things we can expect in Kamigawa: Neon Dynasty.