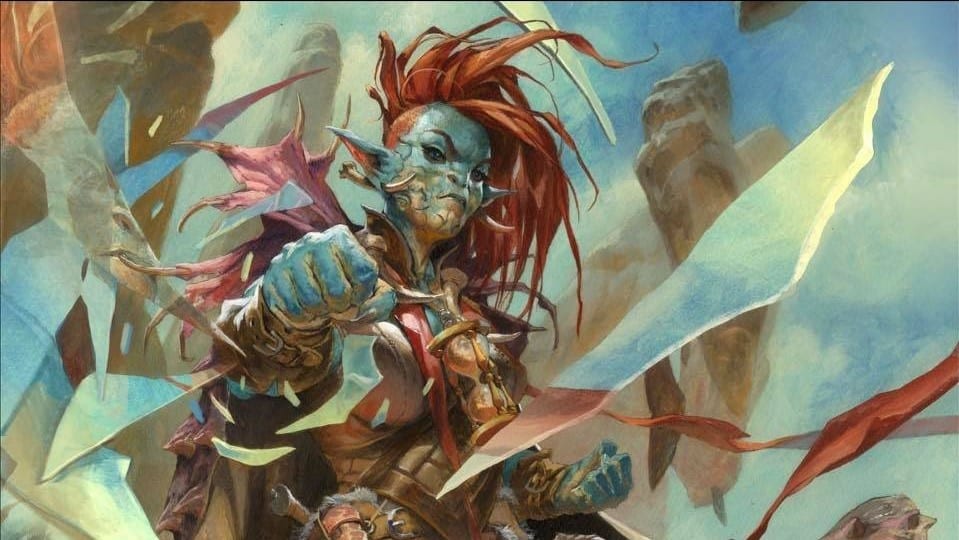 Sometimes you just need to get weird with your Commander decks. It’s nice to break away from the usual strategies and mess about with something truly odd every now and then.

Amongst all of the many legendary creatures, and lord knows there are a lot of them, one of our favorites for breaking away from the norm is an Ogre who can control time.

Obeka, Brute Chronologist, who only has one K in their name despite how often we type it with two for some reason, is a four-mana blue, black, and red 3/4. They’ve got no particularly strong combat abilities, nor do they interact with the board state, at least not in a traditional way. Instead, they have a single ability that allows them to mess with the flow of battle.

You can tap Obeka to allow whoever’s turn it is to end that turn. The rules text is important here, “Exile all spells and abilities from the stack. The player whose turn it is discards down to their maximum hand size. Damage wears off, and “this turn” and “until end of turn” effects end.” This is important for a lot of reasons. For starters, it means you can save other people from potentially fatal attacks if you choose to do so.

The main thing it allows though, is the abuse of some of the downsides of plenty of cards. So, let’s dive into which cards you should be picking up if you’re looking at building a deck around this timey-wimey commander.

The best creatures for Obekka

Some of the former options here are Puppeteer Clique, which lets you steal cards from an opponent’s graveyard, Identity Thief, which not only lets you copy other creatures, but then also permanently exile them, and Feldon of the Third Path, which lets you make copies with no downside.

You’ve then got creatures with negative ETB effects. For example, Kroxa, Titan of Death’s Hunger is a two-mana 6/6 that you have to sacrifice as it enters the battlefield unless it escaped. Whenever it attacks or enters the battlefield though, you get to have each opponent discard a card, and those who can’t lose three life. Being able to attack with a creature like this from turn three onwards is absurd.

The best support cards for Obekka

Onto noncreature cards now. In terms of enchantments Mirror March, [tooltips]Splinter Twin, and [tooltips]Flameshadow Conjuring are all going to allow you to make copies of your creatures, and then have no issues keeping them around. Frankly, it’s all a little offensive, but you’re in charge, so who cares. It’s not an enchantment, but Twinflame is a sorcery that’ll do the same kind of thing too.

You can also steal things from other players with Macabre Mockery or Gruesome Encore. Being able to do all of these things with no downside makes Obeka powerful in a way that most Commanders can’t deal with. Just make sure to also include Thousand-Year Elixir too to let you get as much use out of Obeka as you need.

Read More: 2022 Is The Best Year To Stick To One Format