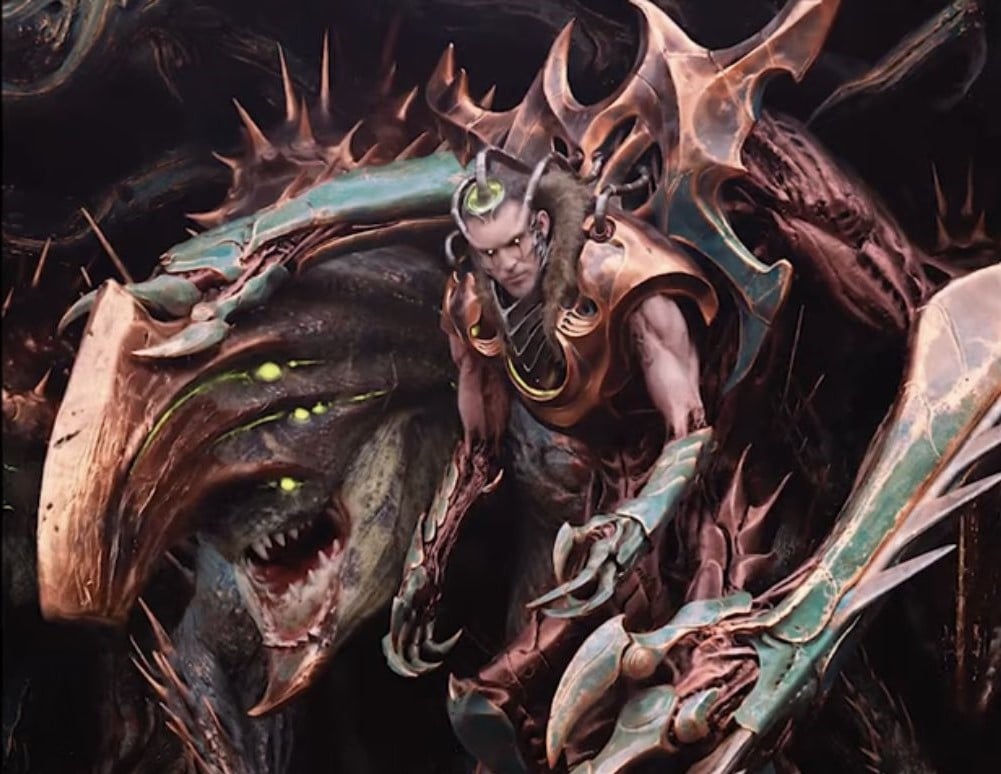 MTG players have been waiting in trepidation to see which of their favorite Planeswalker characters would be corrupted by the Phyrexians in MTG’s upcoming set. When the first look for Phyrexia: All Will Be One was previewed, ten Planeswalker characters were revealed to appear in the set. The catch? Half of these Planeswalkers are going to be Compelated. Unfortunately, a massive leak from early Dominaria Remastered packs contained all of the Phyrexia: All Will be One Rare cards, which ultimately spoiled which Planeswalkers end up Compleated. That said, Wizards of the Coast just officially spoiled one of the corrupted Planeswalkers, and it has not been seen in previous leaks! Let’s take a look at Lukka, Bound to Ruin!

Lukka, Bound to Ruin is the first of the five Compleated Planeswalkers in Phyrexia: All Will Be One to be officially spoiled. Like the Compleated Planeswalkers from previous sets, Lukka has the Compleated mechanic that affects the amount of Loyalty counters the card enters the battlefield with depending on how you pay your Phyrexian Mana. If you pay with life instead of mana, the Planeswalker tends to enter with fewer Loyalty counters. In this case, Lukka enters with five Loyalty if mana is used and with three Loyalty if mana isn’t used for its Phyrexian mana.

As is the case with most Planeswalkers with a Gruul, or Red Green, identity, Lukka cares a lot about the creature spells. His +1 helps to ramp into larger creature spells which could help make a stompy archetype more effective. You don’t really need the extra Loyalty for Lukka to storm the board with larger creatures, so this is a Planeswalker I can envision many MTG players paying life for instead of mana.

Lukka’s -1 helps to ensure that he is not too tempo negative, which is incredibly important in the current state of Standard. A 3/3 Phyrexian Beast with Toxic One is not super exciting, but the cost to create this creature is quite minimal in terms of Loyalty.

Lukka’s Ultimate ability is not super impressive, but it does lead to the stompy strategy very well. Lukka can immediately Ultimate when all of its cost is paid via mana, allowing Lukka to immediately impact the board in a different way. This Ultimate allows Lukka to deal damage to any number of target creatures and Planeswalkers, which, in total, is equal to the creature on your board with the greatest Power. This ability is held back by the need for a board presence to be established previously. Still, it allows Lukka, in its cheaper and more expensive capacities, to function differently. This is a very interesting design.

Lukka brings a lot of traditional patterns seen with Gruul Planeswalkers throughout Magic history. Many of these Planeswalkers are capable of ramping mana, and many of them care about Creature spells. Most of Reddit’s commentary addressing the new Compleated Lukka acknowledges these traditions:

“”spend this mana only to cast creature spells” As if gruul players were going to use it for anything else.” – snootyvillager

One of the Reddit comments here points out something incredibly important about Lukka’s Ultimate ability:

“Notable: “Greatest power among creatures you control as this ability is activated“” – warcaptain

It may not seem like it, but this bold line of text is essential to Lukka’s ability. The issue with abilities that check creatures’ Power and Toughness values is that they’re very easy for the opponent to two-for-one. If they remove the creature in question as the spell or ability is on the stack, not only do they kill your creature, but they also render the spell or ability useless. Lukka’s Ultimate having this extra line of text ensures that removing the creature in response to his ability will not render the ability useless. No matter what the board state is as Lukka’s ability resolves, it checks for X’s value at ability activation. This won’t stop your opponent from potentially protecting their own targets since you have to assign damage prematurely. Still, it will prevent you from being two-for-one’d in a rather traditional fashion.

Many Standard players are seeing potential with playing Lukka on turn four into Titan of Industry on turn five. However, it’s still somewhat difficult to know if this Planeswalker will see significant competitive play. It will be fine in Commander decks that care about creatures or Toxic, but past that point, Lukka seems like an ok Ramp option for weaker competitive formats. That said, players can already argue a case for this card in Standard, which means it has potential.

Read More: WoTC Called Out for Being “Most Delusional Company Ever” in Top MTG Trending Video