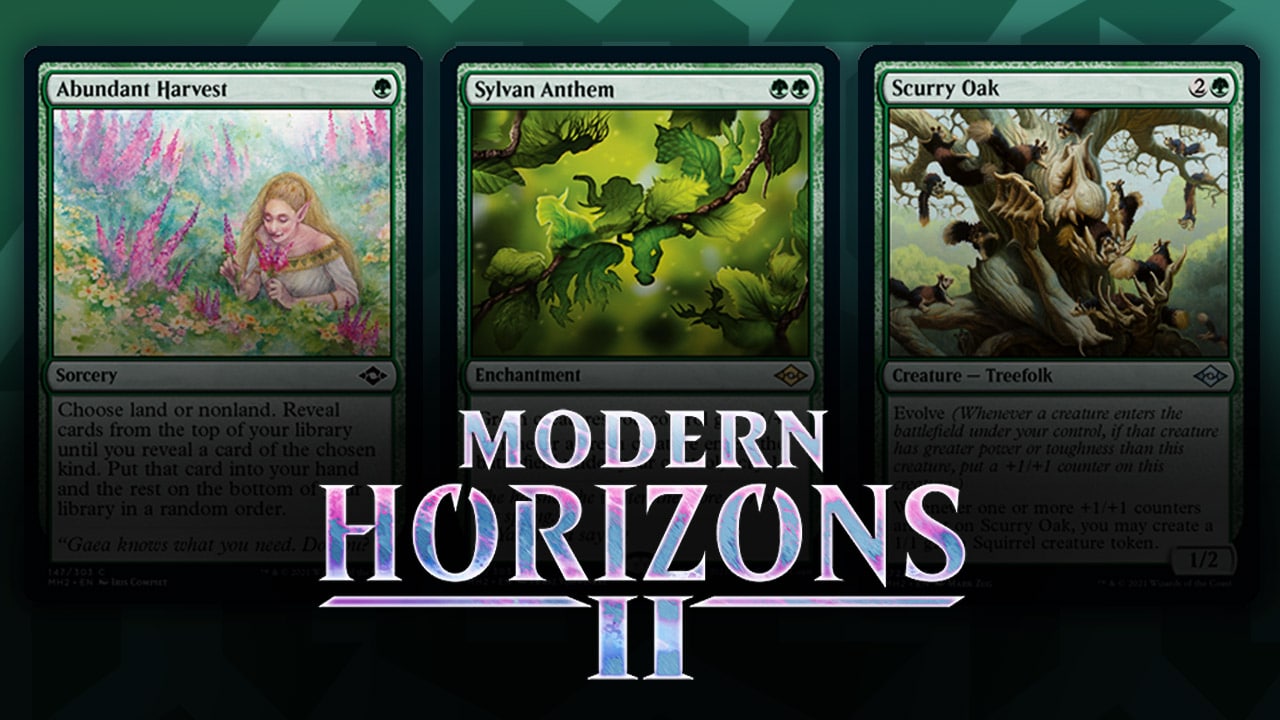 First, we would like to thank Wizards of the Coast for the chance to preview three new cards from the upcoming set, Modern Horizons 2. The upcoming straight-to-Modern set is oozing with flavor, from desirable reprints to fresh takes on beloved characters from Magic: The Gathering‘s rich history.

But let’s not keep you waiting—today we bring to you Abundant Harvest, Sylvan Anthem, and Scurry Oak.

While it’s hard to say where this card will settle in Pauper, there is are a swath of strategies that could be interested in the card. It could see play in Gruul Midrange, Jund Cascade, or even Walls Combo as a guaranteed way to hit land drops. Outside of Pauper, the Sorcery could see play in Tron and Amulet Titan but hitting any land off the card may be a downside. Either way, it’s sure to see play in Modern, Historic, and Legacy due to the low mana value and effect given.

Green anthem effects are hard to come by, and that’s where Sylvan Anthem comes in. For two mana, you have a clean way to grow your board of Green creatures and Scry when they come in. The enchantment is sure to see play in Commander in Green-based tribal strategies such as Elves or Squirrels. Even alongside cards such as Beast Whisper, it’s a powerful way to filter into the cards you need. It even pairs well with Avenger of Zendikar, since the ability on Sylvan Anthem cares about creatures entering the battlefield. It could extend into Modern Elves as a sideboard option for the removal-heavy match ups. Either way, it is a two-mana anthem effect that is sure to pique the interest of tribal enthusiasts across various formats.

Plus, these Sketch Frames offer a fresh aesthetic on MTG cards. It seems these cards feature the first initial sketch before the final piece. Even the flavor text suggests the brief from the art director about the card in question. This is a really flavorful way to see how the art develops through these cards and insight on the process before completion.

Scurry Oak is an exciting card that is likely to play a huge role in Modern Horizons 2 Limited. With Squirrels coming back thanks to Mark Rosewater’s preview on Monday, Scurry Oak looks to reward you for playing big threats by creating Squirrel tokens. Falling in the Golgari color pairing, Squirrels are looking to be a strong Draft archetype and Scurry Oak could fall into that plan. Going further, the Treefolk could see play in Commander with Chatterfang, Squirrel General leading the charge as it’s another token generator to make a bunch of Squirrels. It’s unlikely to break any formats it’s legal in, but it’s sure a fun build around for those who want to force Squirrels at every possible opportunity.

That wraps up the exclusive previews! Once again, thanks to Wizards of the Coast for the opportunity to preview these cards. Which Modern Horizons 2 cards has you the most excited about so far and what reprints are you hoping to see?