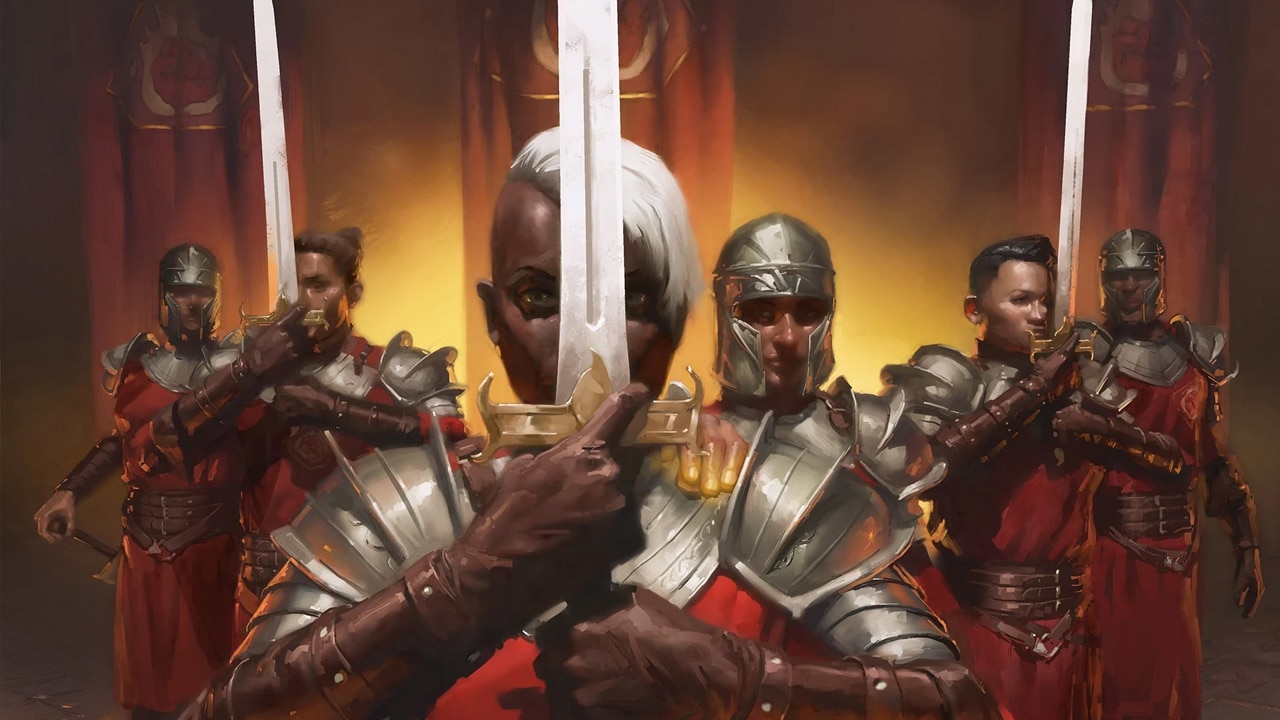 Creatures Are Two for the Price of Two With This New Arena Mechanic!

With Alchemy Horizons: Baldur’s Gate’s spoiler season well underway, we’ve got a trio of new mechanics to admire and assess. Specialize has already proven itself to be a confusing beast of a mechanic, but thankfully the same cannot be said for Double Team. MTG Double Team essentially lets you play creatures twice in a surprising return to simplicity for a digital-only mechanic.

As the replacement for Commander Legends: Battle for Baldur’s Gate’s Myriad mechanic, Double Team gives otherwise weak creatures more value. This gives Arena players a vague taste of the Myriad mechanic better suited to a game without any four-player formats.

Only nine cards in Alchemy Horizons: Baldur’s Gate feature Double Team. However, the majority leave something to be desired. If you’ve not heard of it before, Double Team is a new designed-for-digital mechanic that lets you conjure a duplicate of an attacking Double Team creature.

Unfortunately for players looking to have an infinite supply of creatures to attack with, Double Team does come with a few caveats. First and foremost, when the duplicate creature is conjured into your hand, both cards lose the Double Team effect. The ability also doesn’t activate from any tokens with the new keyword. This means that the most you’ll ever get out of a Double Team creature, on its own, is one copy.

Double Team feels somewhat underwhelming because you have to pay the mana cost for the conjured duplicate creature. This is because the majority of creatures we’ve seen with Double Team so far are just plain dull. Giant Fire Beetles, for instance, only features Menace and is far too expensive for what it does. This feels like a massively wasted potential, as there’s little need for the duplicate card beyond balancing expensive mana costs.

Only one card with Double Team seems in any way worth paying so far. While it’s a pales in comparison to its counterpart, Battle Angels of Tyr, Champions of Tyr may still be worth your time. By featuring an ETB effect, Champions of Tyr is a card you might want to pay for twice. This is much more than what we can say about Soldiers of the Watch.

A Price Worth Paying

While the majority of Double Team cards are lackluster, there is value to be found in this new mechanic. Thanks to Sworn to the Legion, Alchemy Horizons: Baldur’s Gate’s version of Legion Loyalty, any creature can be given Double Team. This allows you to keep creating duplicate creatures worth paying for as long as you keep attacking.

While expensive at six mana, Sworn to the Legion facilitates some incredibly potent synergies. Imagine having a neverending army of Runaway Steam-Kiln, for instance. What about an infinite supply of Righteous Valkyrie to gain you more life than you know what to do with? While the possibilities are exciting, it’s still disappointing that only a few Double Team cards conjure any excitement.

Mercifully, Sworn to the Legion isn’t the only card with the ability to give Double Team. Alongside Unexpected Allies, Ulder Ravengard, Marshal also has a lot of exciting potential. Only costing three mana, Ulder Ravengard, Marshal and its ability to give Double Team and conjure duplicates of other attacking creatures may well see play in Historic.

While there are some exciting niche possibilities for MTG Double Team, the value ultimately isn’t there for every deck. Instead, Double Team will likely find its home in Limited events, providing a valuable extra body after attacking that doesn’t rely on the luck of the draw. Cards solely designed for Limited play are hardly a bad thing. We don’t play every Common in Streets of New Capenna, after all. However, we can’t help but be disappointed at the wasted potential.

We only hope that if MTG Double Team manages to be a returning Alchemy mechanic, we’ll see it on more than just dull ol’ basic creatures in the future.