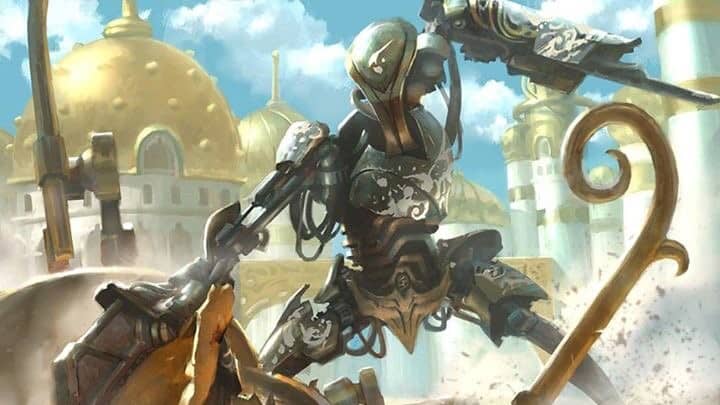 Brawl Is The Best Way Into MTG Arena

I have a confession to make; I completely stopped playing MTG Arena for a few months. I was still playing MTG in general, but Arena had completely dropped out of my list of games. In fact, I hadn’t really played Arena at all since Throne of Eldraine launched, so I’m fairly far behind when it comes to my collection of Standard-playable cards.

It also means I don’t have as many Wildcards as I used to, nor access to basically anything else I want to do unless I want to sink some money into the game, which I’ve done before, but don’t want to do at the moment. Frankly, dropping back into MTG Arena sucks, because it’s so incredibly slow to earn new cards and packs, especially when compared to other digital CCGs out there.

Standard is hard for free-to-play players

The first thing I did was build the brew that made me want to play again in the first place, which was a mill deck with Tasha’s Hideous Laughter. I’ve never been one for netdecking where I can avoid it, and I stopped being competitive a while ago, so I like to brew my own decks instead. So, having used the last of my Rare Wildcards and a few commons and uncommons, I finally had a mill shell that seems to be winning more than it loses.

However, along with being a brewer, I’m also easily distracted and fidgety, so sticking to one deck, especially as it’s essential to make sure you do your daily challenges, isn’t something that’s possible in Arena, and definitely not possible for me. This is where it started to become apparent that I wasn’t going to have a good time here.

It’s damn-near impossible to keep up with anything competitive without sinking a lot of money into Arena, unless you’ve already been playing every day since the game launched. Returning players have it bad, but new players have it far worse. It was at this point, a couple of weeks after reinstalling Arena, that I was about to uninstall it again.

What if we all fought?

I didn’t uninstall it though, and instead chose to start messing about with Brawl properly, and I’m incredibly glad I did. Instead, I decided to delete my Standard decks and properly commit to trying out some Brawl. To be honest, I resisted Brawl when it was first announced, because I’m a bit of a Commander snob. I didn’t use to be, but it happened at some point when I got sick of rotations, so here we are.

Anyway, the main reason I decided to try out Brawl, other than being a Commander player, is that it only requires one copy of any given card, which makes it far more approachable for any returning or new players. You can also get by with Commons and Uncommons too, because it’s far more about deck construction than just the rarity of your cards.

It’s not just that, of course, it’s also that the format is incredibly good fun. You can rely on things being very different to Standard despite having the same card pool, and frankly, the diversity of decks is far higher too. It was at this point that I realised that Brawl is probably the best format for new players to MTG Arena.

Welcome into the fight newbie

Now, I know that Brawl may seem intimidating for new players, but there are a few advantages it has over Standard, especially when it comes to MTG Arena. First of all, as previously mentioned, you only ever need one copy of any card. This is a good counter to the frankly atrocious economy that Arena harbors, and it means that you can play the game without being quite as frustrated with the whole thing.

It’s also fun. Now, Standard is fun too, and Historic even more so, but they’re also a little competitive. Being able to play with your favorite themes has always been something I’ve enjoyed, and I think it’s the same for a lot of players too. Finding those synergies and then building around them is a blast, and it’s not as easy to do in Standard.

Finally, and this is the most important bit, it really is one of the best ways to learn how to play MTG. Brawl, much like Commander, has some of the most diverse and interesting interactions in MTG. It’s a safer place to brew a deck thanks to the slower pace, and because of the mix of cards, it’s a good way for new players to really soak themselves in what MTG is all about. It’s a damn good job that Brawl is on MTG Arena, because without it, I’m sure there are plenty of players who’d simply bow out.