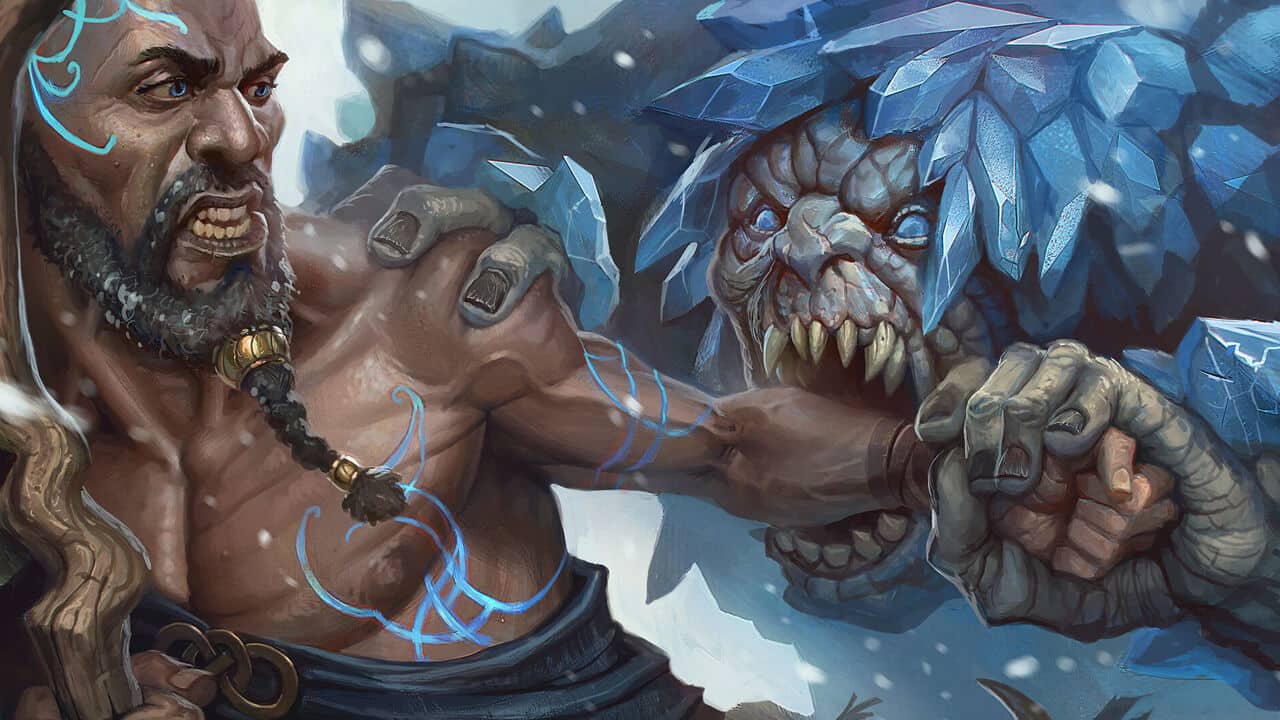 With MTG Kaldheim now beginning to take roots in Standard like the great World Tree, it’s important to take note of which cards are the ones to watch.

Which cards from the great halls are worthy of your attention? Which of the Gods should you align with, and which of the legendary beasts should you try and befriend?

Well, rather than wondering about it and not knowing for sure, how about we just tell you our picks for the five best Kaldheim cards for Standard are, and then you have a nice nap or something?

Before we get into the list proper, let’s discuss some of the honourable mentions. Tibalt’s Trickery isn’t a part of this list because there’s nothing honourable about it, and frankly, we think it’s probably a little too inconsistent to be banned or anything like that.

Our actual picks for honourable mentions are Dragonkin Berserker, who seems like the kind of card a Red deck could use as a threat early on, and then a mana sink later on to make even bigger threats. It’s hard to argue with a man that can summon Dragons at will, you know?

There’s also Graven Lore, which isn’t anything to do with Dragons, but does allow you to Scry a lot of cards before drawing them, and there’s a history of that kind of card being great for Standard control decks, so we don’t see why this would be any different.

Then we’ve got Egon, God of Death and the Throne of Death they sit upon. Both sides of this card play nicely together, but Egon himself is a three-mana 6/6, and that’s the kind of nonsense we can wholeheartedly endorse.

Finally, you can’t really talk about Kaldheim cards without giving a shoutout to Snow Lands. They’re going to bring down the price of everyone’s favourite variant of Basic Land, but they also enable a lot of good stuff as well. We see you Snow Lands, and we appreciate you. With that all out of the way, let’s get onto the main list.

Look, Vorinclex was always going to be a bit of a beast, and this version is no different. While it doesn’t have the same effect as its older brother, who is also called Vorinclex, it is still a six mana 6/6 with trample and haste.

That’s a big win, but the main thing is that playing this horrifying Creature with its counter doubling basically allows you to ultimate any Planeswalkers you play after him. That’s amazing, and is almost guaranteed to tilt any and everyone who is on the receiving end of it.

Counterspells normally have enough different clauses to justify the need for a lawyer before using them. Whenever one comes along that can be used against anything, it’s worth paying attention too. The advantage with Saw it Coming is that it’s fine as a three-mana spell, but if you use foretell you can then smack an opponents spell out of existence for a mere two mana.

Using foretell also protects from hand disruption effects too, and that’s the kind of protection you want in a control deck that can often suffer thanks to pesky counter-counter strategies. Plus, look at the swagger on the art, you have to respect it.

We’re fairly certain you’ve heard of a little spell called Lightning Bolt, and that you’re fully aware of how powerful being able to deal three damage for one mana is. While Frost Bite can’t target players (booooo), it can target everything else you’d want to hit, and that’s nearly as good.

It doesn’t even take that much work to turn it from a Shock into a Lightning Bolt either thanks to the abundance of snow-based cards around now. This is definitely a card to fear or love, depending on whose hand it’s in.

Five-mana board wipes are fine, but they can sometimes be a little too slow to be effective. What you really want is a four-mana board wipe instead, they’re the good stuff. You know the word we mean instead of stuff there, but this is a family-friendly place.

Well, Doomskar complicates the maths a little bit, but ultimately it’s a five-mana board wipe that you can pay for in two interest-free instalments, which means that you can actually cast it on turn three. Stonks. This is sure to be a massive card in Standard control decks, and we’ll all be regretting talking about it soon.

Finally, we have everyone’s favourite Creature type, a good old-fashioned Dragon. Dragons have a somewhat tumultuous history in MTG, because they’re often a touch too much mana for competitive formats, despite being the only logical choice for a five-color EDH deck. However, five-mana Dragons fairly regularly find their way into Standard decks, and Goldspan Dragon is no different.

Goldspan Dragon is a 4/4 with flying and haste, and that means you can charge in the turn you play it. That’s nothing spectacular, but the thing here is that Goldspan Dragon also creates a Treasure token whenever it attacks or becomes the target of a spell, and it makes all of your Treasure tokens sacrifice for two mana instead of one. This gives you so much damn mana so quickly, and basically means it only really costs three-mana on the turn you play it. If we hadn’t already sued the stonks joke, we’d be using it here, but you can’t argue with the value.