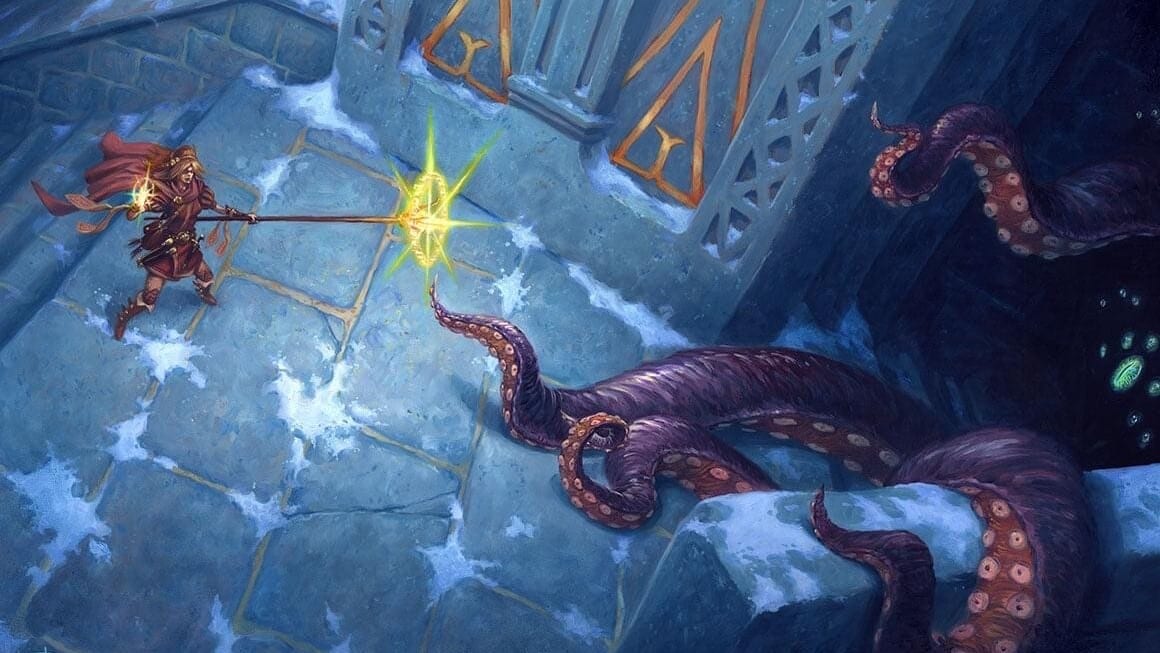 Why You Should Build Hama Pashar, Ruin Seeker In Brawl

In our quest to find good decks to build in MTG Arena that don’t require an infinite number of Rare and Mythic Rare Wildcards, along with also trying to dodge the upcoming rotation, we’ve been looking into rotation-proof Brawl decks.

Now, there are a fair few of these out there, and there’ll obviously be a lot more tribal support when the Innistrad sets drop, but one Legendary Creature, in particular, has had us delving deep into our happiness and coming out victorious. As you’ve probably already guessed, that Creature is Hama Pashar, Ruin Seeker.

Can you say value?

Hama Pashar, Ruin Seeker is a three mana White and Blue Human Wizard. They’ve got a power of two and a toughness of three, so they’re not all that great in a fight, but that’s also not why we love to have them leading us into battle.

The main reason we like them is that they make it so that the room abilities of dungeons you own trigger an additional time. That means you get twice the value from every venture into the dungeon you do, and that’s an incredibly powerful ability.

Of course, this is a useless ability without good support, so it’s not just about being able to get them onto the field, but also have the supporting pieces out there as well. Thankfully, that’s not something we’re lacking here, so let’s break it down for you.

Hama Pashar and the Dungeon Bros

Honestly, you basically want to just search in MTG Arena for every card with the word “dungeon” on it in Blue and White, and then just plop them into the deck, but there are a few star players here that really help boost the deck’s power level.

The first of these is Nadaar, Selfless Paladin, which is one of the few Rare cards you really need in this deck. They’re a three mana 3/3 with vigilance that lets you venture into the dungeon when they enter the battlefield or attack, and they have an anthem effect if you’ve finished a dungeon. On a similar note is Planar Ally, a five mana flying 3/3 that lets you venture when they attack.

The other bits that did a lot of work for us were actually Delver’s Torch and [tooltips] Dungeon map. Putting a [tooltips]Delver’s Torch on your Planar Ally or Nadaar, Selfless Paladin allows you to blitz through the dungeons, and Dungeon Map is a wonderfully repeatable bit of tech that’ll help you succeed every time.

What about not dungeons?

Outside of those cards, there’s no much support for Dungeons because there’s only one set. That means that your best bet is supporting the cards you do have. Trickster’s Talisman is an equipment that lets you copy a Creature once, which is useful for some of the nonlegendary options you have in your deck, and the same is true of Glasspool Mimic as well. You’ve also got True Polymorph, although we prefer this one for copying an Artifact instead.

If you’re feeling particularly fruity, you can splash out on a Mythic Rare in the form of Lithoform Engine. This is a four mana Artifact that you can tap to copy triggered or activated abilities, Instant and Sorcery spells, and even permanent spells you control too. This is an all-around superstar for this style of deck, so it’s worth the investment if you’ve got a Mythic Rare Wildcard just hanging around.

It’s also a good idea to help boost your ETB triggers too. That means the likes of Teleportation Circle, a four mana Enchantment that lets you flicker Creatures and Artifacts you control, is perfect. You’ve also got bits of protection that have a similar effect like Semester’s End and even Glorious Protector.

If you put all of these in a deck together, make sure you put in a few bits of decent removal, maybe a couple of counterspells, and then whatever Rares and Mythic Rares you already own, you should have yourself a pretty decent dungeon-delving deck.

It’s a really interesting mechanic to dig into, and it’s also a lot of fun. You can choose whichever dungeon you think fits the battle you’re likely to be in at the time; getting extra triggers on everything means you can constantly churn out value, and, most importantly, it’s not a particularly expensive deck to make either.

Which decks are you building in preparation for the great rotation of 2021, and have you figured out any other ways to have a lot of fun with the new mechanics in Adventures in the Forgotten Realms? Let us know in the comments and share your own Uncommon Brawl lists too.