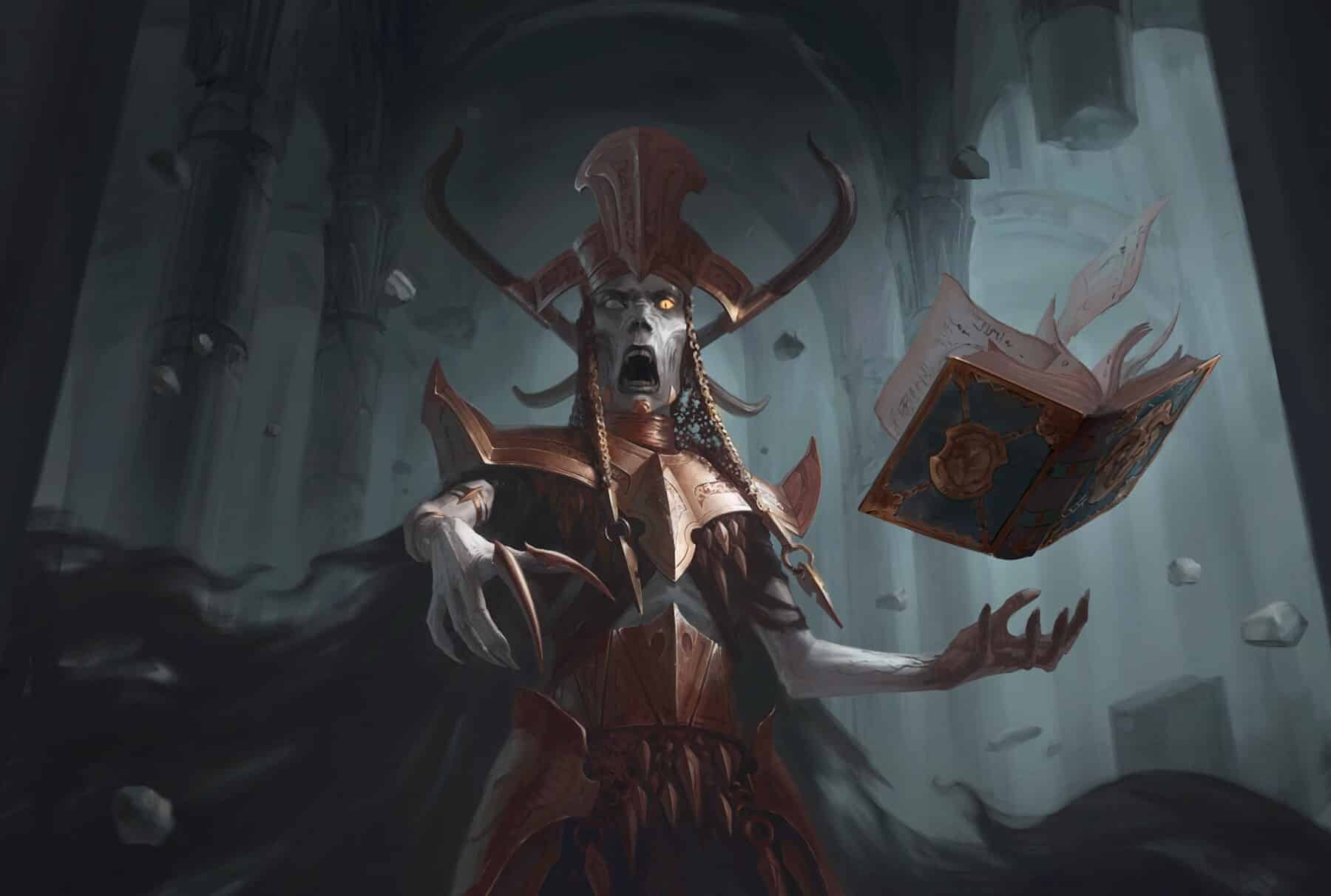 What is Stranger Things Villain Vecna in MTG?

In the fourth season of Stranger Things, viewers were introduced to a new villain named Vecna. Like many beings within the mysterious world of the Upside Down, its origins are from Dungeons and Dragons. Since MTG and D&D are owned by the same company, it’s not too far of a stretch to believe that Vecna also has a presence in the world’s most popular Trading Card Game. For those curious about Stranger Things’ ascended Lich God villain (don’t worry, this is spoiler-free), I will introduce how Vecna has invaded the world of MTG from the Upside Down!

In Magic: the Gathering, Vecna is created by assembling different cards found in the Core Expansion “Dungeons and Dragons: Adventure in the Forgotten Realms,” which was fully released on July 23rd, 2021. Three different cards from the set are needed to assemble the Indestructible Zombie God. While the process is complex, should you manage to call Vecna from the darkness, your opponent’s fate may be sealed.

To clarify, Indestructible means that card effects that ‘destroy’ in MTG will not work on Vecna. Additionally, Combat Damage dealt to Vecna by other creatures will not contribute to Vecna’s destruction. Be wary, as exile effects and stat reduction abilities can still send Vecna back from whence he came. Don’t let the lack of text fool you. Once you assemble the God, Vecna is a lot scarier than he looks since he gains abilities from his other pieces. There’s even a corner case with rulings that allow you to grant Vecna a variety of different abilities.

How to Assemble Vecna in MTG

Buy At TCGPlayer
The Book of Vile Darkness is the main component needed to assemble Vecna. By exiling it alongside the Eye of Vecna and the Hand of Vecna, you can create the Lich God himself. The most important thing to note is that Vecna will gain the triggered abilities of all the parts that go into making him. To clarify what Vecna is truly capable of, we will explain Vecna in its complete form at the end of the article.
Buy At TCGPlayer

All of Vecna’s pieces have a life loss theme. To truly synergize with this D&D God, you need to be willing to sacrifice your lifeforce. If you appease the God by losing two or more life during your turn, his Book of Vile Darkness will reward you with a 2/2 Zombie at the end of the turn. This can help to pad your life total from going down further from opponents trying to stop your ritual.

The First Piece of Vecna

Alongside The Book of Vile Darkness, you will also need to return the Eye of Vecna to its owner if you wish to appease the God. The Eye of Vecna allows you to draw cards in exchange for losing two life (and paying two mana past the first turn you play it). Most of the time, this is a good deal since card advantage is significant in MTG.

While somewhat sketchy in constructed formats due to only having 20 life, this card can be pretty powerful in Commander, MTG’s most popular format. With 40 life, not only do you have more life to use, but games also go a lot longer. These factors make the Eye of Vecna rather powerful. To sweeten the deal, if you have The Book of Vile Darkness in play, Eye of Vecna’s life loss will grant you an additional Zombie Token at the end of the turn.

The Second Piece of Vecna

Alongside Vecna’s eye, you also need to have the Hand of Vecna if you hope to use him to your ends. While the Eye of Vecna draws you extra cards, the Hand of Vecna increases an equipped creature’s stats by the number of cards in your hand. It’s easy to see where this is going: Draw cards and lose life to make the Hand give your creatures a more significant buff. Then, the life loss can create a token for the Hand to equip itself to.

If you don’t have the mana to equip the Hand normally, Vecna can help you out, as long as you pay the price. Generally, unless you’re trying to lose life to trigger other things, you probably want to avoid the life loss equipment cost, as it can be pretty expensive. Before you jump to conclusions and think Vecna can equip itself to things in his final form, don’t be fooled. As funny as that would be, Vecna only remembers the triggered abilities from his pieces, not activated ones. On the Hand of Vecna, that’s the ability that buffs creatures at the beginning of combat.

What does Vecna’s Final Form Actually Do?

Now that we’ve introduced all the pieces and demonstrated how to summon Vecna for your ungodly deeds, we should overlook what Vecna actually does since it’s not apparent on the token. Vecna will gather all of the abilities listed below from its various pieces:

Considering how much Vecna does with all its pieces, it truly lives up to its name. This creature draws cards, grows itself from those cards, and creates Zombie Tokens with the life you lose. As powerful as this is, what if I told you that you could go further?

One of the official rulings from MTG’s The Book of Vile Darkness is pictured above. When creating Vecna, you need to have an Artifact named Eye of Vecna and an Artifact called Hand of Vecna. Once those artifacts are exiled for Vecna’s creation, they return to whatever they were before they entered the battlefield. Because Vecna cares about the triggered abilities of the exiled permanents, it’s possible to build a crazy version of Vecna by making other things with triggered abilities into temporary copies of Vecna’s pieces.

Saheeli, Sublime Artificer is one way that you can do this. By temporarily changing one creature or artifact into one of the required pieces, Vecna can instead gain the triggered abilities of the original card when it gets exiled. The sky’s the limit with this. There are many ways to create a Vecna that gives you infinite resources or wins the game as soon as it enters play. One example could be combining a mana rock with an untap ability that costs less than whatever amount of mana it gives you. This combination leads to a Vecna that taps for infinite mana.

If you’re a Stranger Things fan that already has a love for tabletop games, consider giving MTG a try! It’s the most popular TCG in the world for a reason. For more experienced MTG players looking for a unique EDH deck to try, why not try to assemble your own version of Vecna? This has definitely inspired me to try and build something incredibly bizarre through a series of corner case rulings.