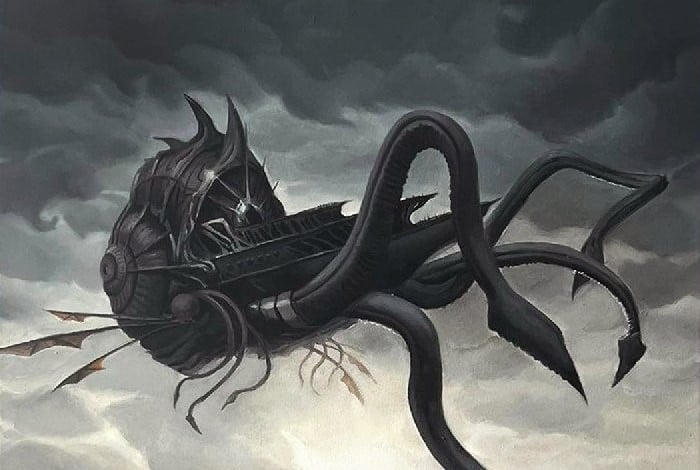 Alchemy spoilers for the Baldur’s Gate expansion coming to MTG Arena are officially over. While many of the cards are watered-down versions of the Commander versions of these cards or are changed a bit, they have a more significant impact in two-player formats. A lot of what the set had to offer was not very exciting. That was until Wizards of the Coast dropped a bomb right at the end of their spoiler season. It turns out we’re getting a card that threatens to ruin digital formats, particularly MTG Historic, entirely.

Displacer Kitten with NO CHANGES

As a combo player, I am incredibly excited that Displacer Kitten is coming to MTG Arena with no changes. This card has been a hot topic since its release, being the diamond in the rough financially from Baldur’s Gate. Players clamored for a ban after realizing how ridiculous the card was. At the same time, I am absolutely terrified. I don’t know how this card passed testing without changes. It may be acceptable in Alchemy (I don’t think it will be), but Displacer Kitten threatens to ruin MTG Historic in a fantastic way.

For anyone who forgot, Historic has its own version of Teferi, Time Raveler. This, combined with a mana-positive rock like Mox Amber, allows for infinite mana and infinite card draw. This happens because Displacer Kitten can Flicker and reset Teferi every time you cast Mox Amber, allowing Teferi to bounce the Amber and draw a card. Because of Teferi’s static ability, your opponent can’t even interact with the process. Mox Amber and Emry, Lurker of the Loch strategies have always been viable in Historic at some level. While being a fringe deck at the moment, an Emry shell threatens to break Historic as we know it.

The Shenanigans don’t stop here. Displacer Kitten doesn’t even need to be used as an infinite piece. Any powerful Enter the Battlefield effects could be broken by Displacer Kitten entirely. Imagine getting a refresh on Yorion, Sky Nomad of Niv-Mizzet Reborn every time you cast a non-creature spell.

Another Card with no Changes

Buy At TCGPlayer
Archivist of Oghma, another cEDH staple from Baldur’s Gate, is coming to MTG Arena without any changes. This card is much weaker on Arena than in its other legal formats. Because Fetch Lands aren’t in Arena, the Archivist isn’t nearly as powerful as it is in Legacy. There are some corner cases where this card will perform quite admirably, but, for the most part, this may not be as impactful on MTG Arena as some may expect.

The silver lining is that MTG digital formats’ biggest boon can come into play here: nerfing. If Displacer Kitten truly breaks Historic, Arena can tone it down a bit. Adding a ‘once per turn’ clause might derail its usefulness, but it could put it at a level where it still impacts Alchemy but isn’t good enough to see play in Historic. We have talked extensively about what Displacer Kitten is capable of. Don’t let this feline fly under your radar.