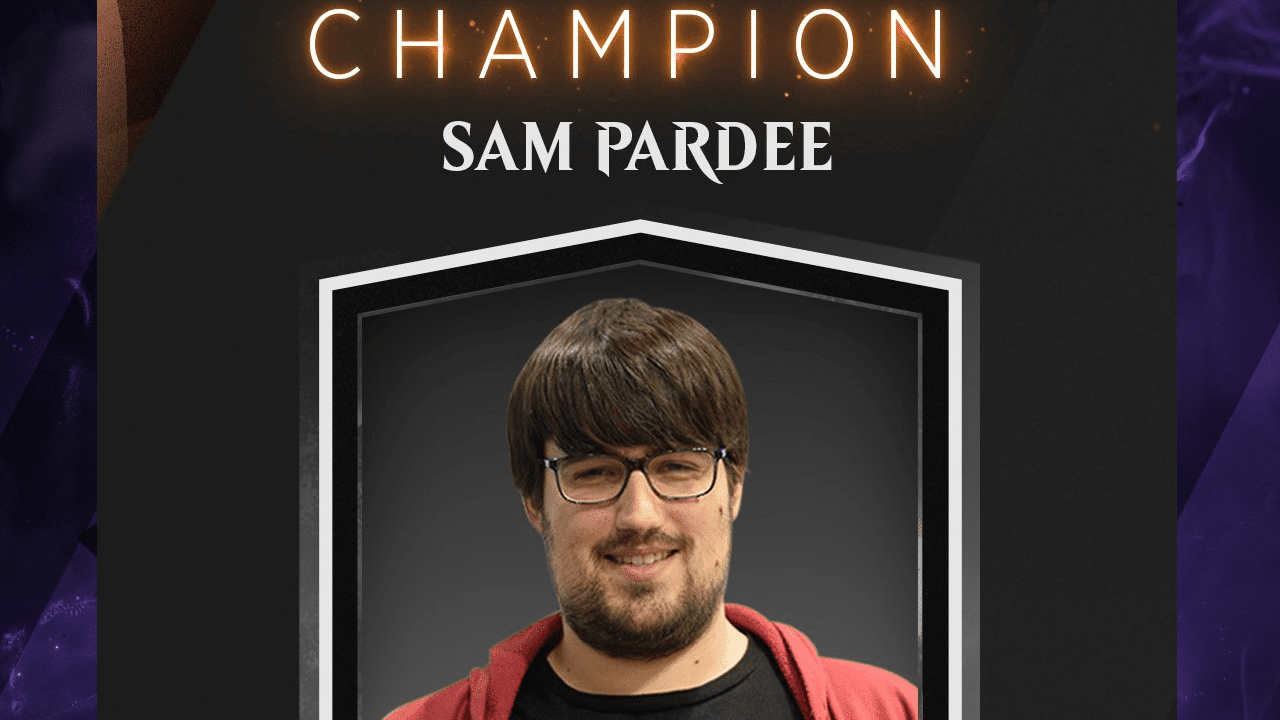 This past weekend was the Strixhaven Championships, and we saw a lot of great Magic played! As we covered in our Championship Historic Meta Analysis article one of the breakout decks of the weekend was Jeskai Turns. There were many variations on the deck submitted over the weekend and Championship Sunday’s Top 8 Bracket had 5 Jeskai Turns Decks in it. The bracket was stacked with incredible players, but Sam Pardee had an amazing run through the winners bracket to win the tournament!

Sam’s Jeskai Turns deck is built a little bit different than the rest of the top 8. The differences from the other top 8 decks are that Sam opted for less diversity in spot removal and counter magic, as we don’t see cards like Fire Prophecy, Miscast, or Scorching Dragonfire. Instead Sam has chosen to go with 2 copies of Shark Typhoon as another card draw outlet, and uncounterable token creation option to punch through damage if the Indomitable Creativity plan is not looking likely to work.

The Road to Victory

The top 8 bracket was historic only despite the swiss rounds of the tournament being Standard and Historic both. The top 8 of the tournament was comprised of 5 Jeskai Turns decks, 2 Izzet Phoenix Decks, and 1 Jeskai Control deck. Sam came into the top 8 in the 8th seed, so his first round opponent was Logan Nettles, a top Magic Online grinder, in the 1st seed. Sam gets the 2-0 him to knock Logan to knock him down to the Losers bracket. Sam’s winner’s semi-finals opponent is David Inglis on Izzet Phoenix, where Sam picks up another 2-0. The Winner’s Finals match for Sam would be against John Girardot, who also was playing his own version of Jeskai Turns. Girardot had his own strong start to the top 8, winning 2-1 against the likes of Matt Sperling, and Matti Kuisma. The name of the game in this match was patience. Games 1 and 2 were really determined by counter wars with Memory Lapse, where Sam won the first game, and John won the second, but in game 3, Girardot stumbled on 3 lands with a clogged up hand, and Sam recognizing this, aggressively countered Curate and Brainstorm to keep Girardot behind on tempo. This allowed Pardee to land a few sharks tokens and a zombie token from Commence the Endgame, coupled with Time Warp to push in for the win. With that win, Sam is undefeated in the Winners bracket, and awaits for his opponent in the Championship Finals.

It’s finals time and Sam’s opponent is John Girardot once again! The Championship Match is best 2 out of 3 matches, meaning that these two could play up to 9 games to decide the finals. In game 1 of match 1, once again Sam displays an incredible sense of patience, allowing Girardot to cast multiple hard cast Time Warps, recognizing that there isn’t a lot going on in Girardot’s hand. Eventually Sam fires off a Time Warp of his own, finding a Velomachus Lorehold to chain together enough Time Warps to win the game. Game 2 was a different story though, as Girardot chooses to draw first, while Sam has to mulligan to 6. Because of this, Sam stumbled on lands early on, and never found enough action to deal with the token pressure from Girardot. Game 3, Sam is firmly in the driver seat, chaining together 2 Commence the Endgame to overwhelm Girardot.

Match 2 starts off great for Sam as Girardot mulligans to 5. His 5 is really good though attempting to cast a Magma Opus from the Graveyard with Mizzix’s Mastery, but Sam is able to counter it. Sam quickly closes the game out with Shark Typhoon tokens, putting him at match and tournament point. Game 2 is very back and forth, with Girardot getting off to a very aggressive start with a bunch of tokens, but Sam fights back to remove Girardot’s board and starts to build one of his own, chaining back to back Commence the Endgames, but Girardot has answers. At the end of the day, Girardot’s hand is more threat dense, and once again, Shark Typhoon shark tokens are enough to seal the game away.

Game 3 is one for the history books though, while the game starts fairly slow with a lot of “land go”, Sam fires off a huge Commence the Endgame on turn 5, but is met with a kicked Into the Roil to deal with the token. A few more turns pass and Sam pulls the trigger on a Mizzix’s Mastery, targeting Commence the Endgame, and fights and wins a counter war over it. Unfortunately this puts Sam shields down, and Girardot capitalizes on it. On his next turn, John casts an overloaded Mizzix’s Mastery, casting 2 Magma Opus, Into the Roil, 2 Brainstorms and a Prismari Command, putting 2 4/4 tokens in play, dealing 8 damage to Sam directly, bouncing Sam’s token, and drawing a ton of cards, letting him sculpt the perfect hand. It’s looking rather grim, but on Sam’s turn, he casts Perilous Voyage to remove one of the 4/4 tokens and scry 2. He puts both cards on the bottom, so he’s drawing blind. He draws a mountain for turn, brainstorms, and finds the best 2 cards in his deck, a Time Warp and a Mizzix’s Mastery. Sam casts the Time Warp, and on his next turn discards a Magma Opus in his hand, and overloads his own Mizzix’s Mastery. In Sam’s Graveyard, 2 Magma Opus and a Time Warp, and that was all it took for Sam Pardee to win the match and tournament!

This match was an absolute nail biter! Congrats to Sam Pardee on an amazing win! You can watch all of the Top 8 over on the official Magic: the Gathering Twitch channel, and I definitely encourage you to do so! What were your thoughts on the weekend? Are you going to try out Jeskai Turns? Let us know in the comments!