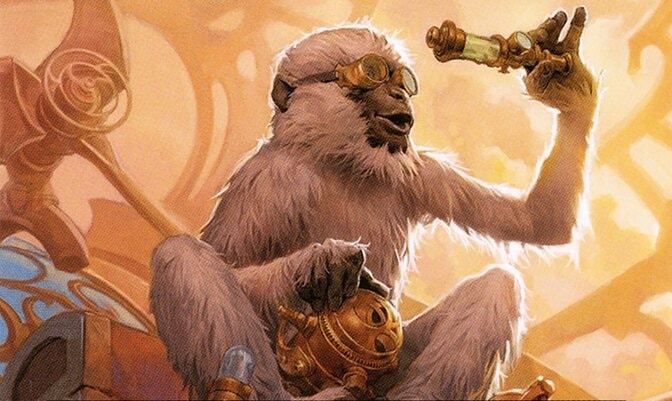 Baldur’s Gate is right around the corner. It’s ironic that, right before the release of a new Commander Legends set, we are getting slapped with an MTG Commander ban announcement.

With paper tournaments returning after the reign of Covid, Duel Commander is getting major turnouts again, with as many as 255 registrants at the format’s most recent major.

On May 30th, four new cards were banned in Duel Commander. We will go over what these are and give a quick explanation as to why they are being banned:

Here’s a Modern MTG staple that is an absolute powerhouse in multiple formats. Turns out that a turn one Ragavan, Nimble Pilferer start in Duel Commander is really difficult to beat. Besides the difference in ban list, Duel Commander only has one difference from normal Commander: both players start at 20 life. This makes taking chip damage from Ragavan a lot more relevant. Don’t be mistaken though, its Ragavan’s abilities that give its owner a huge advantage in the early game. This is a turn one play that is much more potent than anything else currently available in the format.

Commander is a Singleton format with a 99 card deck, which should make a Ragavan start rather unlikely. The other issue is that Ragavan is never a bad play. Because it can also Dash, Ragavan is a powerful option at any point in the game. It is much better on turn one, but it was potent enough that Ragavan was banned from the format entirely.

This card isn’t a very difficult ban in any Commander format because of how scarce it is. Bazaar of Baghdad was printed in Arabian Knights, MTG’s third set ever. Its also on the Reserved List, meaning that Wizards has agreed not to reprint the card (in words anyway). These factors make Bazaar of Baghdad retail for thousands of dollars.

In terms of power level, this card is absurd in Duel Commander when playing Rielle, the Everwise. There are a few other decks that love the Bazaar, but, in reality, the reason for this banning was a combination of availability and power level. The Duel Commander Rules Committee seems to care more about the unification of online and offline metas. The Bazaar is seeing significantly more play online because of its availability. Bazaar of Baghdad, therefore, has been banned as a result of creeping power levels and scarce availability.

Another difficult card to obtain, but MUCH easier to then Bazaar of Baghdad, Serra’s Sanctum also found the ban hammer with the most recent MTG Commander Ban on May 30.

For context, Gaea’s Cradle and Tolarian Academy, other cards in the same cycle of lands as Serra’s Sanctum, have been banned for a long time in Duel Commander. Because the Duel Commander ban list is much more strict, once powerful cards like this become easier to use, they almost always become problematic.

Serra’s Sanctum‘s ban is due to the mass Enchantment support that has been printed in recent sets. It’s a lot easier to build a deck that can abuse Serra’s Sanctum easily with the cards that have been recently released (we’re looking at you, Modern Horizons two). Having a Serra’s Sanctum enter the battlefield has become synonymous with the game ending in Duel Commander very quickly as a result.

Here’s a Commander that was too powerful in the Duel Commander format and had to take a hit for the sake of keeping the format in check.

Shorikai had to be banned as a Commander for two reasons: First, it was very difficult to remove. Shorikai is not a creature by nature. It only becomes a creature if its owner decides to crew it. This means that creature removal, that works on normal Commanders, will not work on Shorikai. Artifact removal is pretty common in the Commander format, but is not common enough to keep a Commander, which can be replayed with a tax when destroyed, in check consistently. The second reason that Shorikai is getting banned is because of heavily the card rewards its owner. It gives board presence and card advantage. Shorikai ends up becoming an inevitability machine. You will always have enough resources when given time with Shorikai on your side.

Due to how difficult it is to remove as a Commander and how much of an advantage that the card gives, Shorikai, Genesis Engine has been banned as a Commander in Duel Commander.

Will this Affect you?

Duel Commander has its audience, but its not nearly as popular as Commander. If you end up playing two player Commander games often, then consider following these rules for something different. Its rather common to sit down for a two-player game of Commander when waiting for your FNM event to fire. Why not make it more interesting?

Want to read the original MTG Commander ban notes? You can find them here.