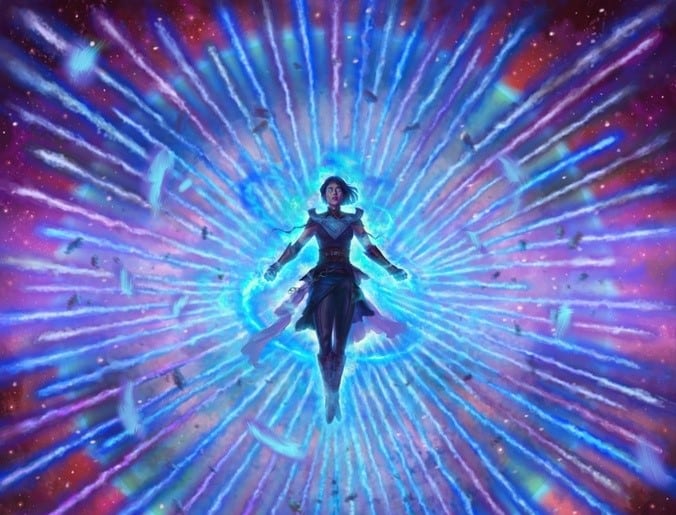 While we have seen myriad misprints coming out with The Brothers’ War product, none have been as bizarre as this one. Consistent misprints with the lucky few who chance across a serialized card in The Brothers’ War is crazy enough, but a new post that popped up on Reddit highlights a change in mana value between different languages of the Brothers’ War card Mask of the Jadecrafter. It looks like the oracle text may be your best friend for this upcoming prerelease weekend!

What Color Is Mask of the Jadecrafter’s Unearth Cost?

A recent post highlighted an odd difference between different languages of Mask of the Jadecrafter. As you can see from the pictures above, the English Mask of the Jadecrafter has a green mana symbol in its Unearth cost, while the Portuguese one has a black mana symbol. This can cause a lot of confusion, especially at a prerelease event where everyone is seeing the cards for the first time. If this misprint is widespread, you can bet some players will be unintentionally Unearthing this card for the wrong cost.

While Redditors typically have some commentary regarding their thoughts for the latest misprint (and trust us, they do), many instead linked a bunch of different instances throughout MTG history where card effects accidentally got changed when translated to a foreign language. Here’s a look at a few of them!

Pointed out by Redditor charlie987987, the German copy of Ixalan’s Makeshift Munitions taps. Ironically, both cards are functional in their own rites. Witch’s Oven is mainly a popular card because of its interaction with Cauldron Familiar. Still, it does demonstrate a need for cards that can sacrifice creatures that have been taken by a Claim the Firstborn or a well-placed Kari-Zev’s Expertise. Fortunately, this card was reprinted in Commander Legends and was not lost in translation. For the record, this Makeshift Munitions is also supposed to play like the original one, even though the card says that it taps.

Stoic Rebuttal is a Common from Scars of Mirrodin that turns into a Counterspell if its owner has Metalcraft active. For reference, Metalcraft is an ability that offers bonuses to a card when three or more artifacts are in play.

Comically, as pointed out by Redditor buffalo8, Stoic Rebuttal’s Portuguese printing doesn’t actually do anything. While the card can still cost one less if you have Metalcraft, the part about it countering a spell somehow got lost in translation. If you, therefore, play this card as written, it will literally go on the stack and achieve nothing.

Burden of Guilt is yet another misprint that shows up when translated into Russian. Instead of paying one to tap the creature that this card is attached to, the Russian Burden of Guilt requires you to tap it. This is a lot better if you’re playing it on an opponent’s creature since, realistically, you should only be tapping the card once per turn. There are cards with untap effects like Pilla Palla that may want a card that can tap it on command, however. That said, Pilla Palla probably isn’t the card to do that with.

But What is its Color Identity?

While these do make for some funny comparisons, especially with Stoic Rebuttal, players are ultimately getting frustrated with the newly found frequency of reprints:

“They are burning the candle at every possible end they can find. It isn’t sustainable without changes. Hopefully they figure their sh*t out before they let the game burn for short term profits.” – Rederth

Perhaps the biggest worry (or opportunity) is players looking to put Mask of the Jadecrafter in black EDH decks as opposed to Green ones:

“That’s a bad misprint. People are going to be playing it in the wrong color decks in Commander.” – GauRocks

“I mean, it’s not like you would want to play something like this in a commander deck” – Jeffthe64th

Ultimately, Mask of the Jadecrafter is not the most powerful MTG card in the world. If someone wants to go out of their way to find a misprinted copy of it, especially if it isn’t their native language, I would them play it. While The Brothers’ War prerelease this weekend may be a bit of a different story, there’s no harm in creating some fun from what may otherwise be a mistake.

Read More: MTG Alchemy Cards May be Coming to Paper