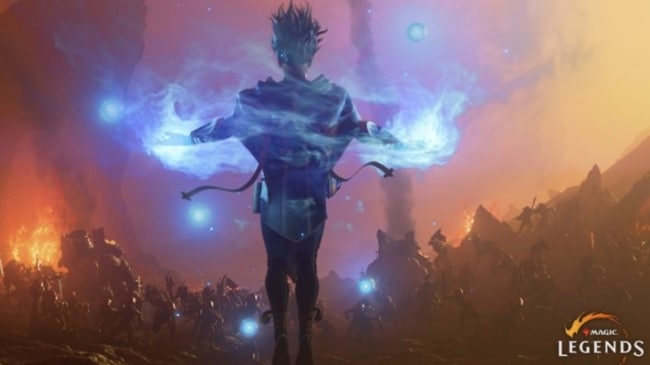 The developers at Cryptic Studios have revealed how regional reputations work in Magic: Legends, the upcoming ARPG set in the Multiverse of Magic: The Gathering.

Planeswalkers will have to band together with allies to help those in need, and doing so will help you improve your prowess and net you some handsome rewards.

You can unlock Reputations and Daily Quests for each particular region after completing story missions for that area. Each region has its own Daily Quests and Reputation track, and each of these Reputations has 100 levels for you to gain favor in, with more difficult content in each area earning you more experience to level up faster.

Rewards for increasing Reputations are broken up by levels, and specific milestone levels have unique rewards based on each region. At levels 20, 40, 60, 80, and 100, you’ll earn either a unique Artifact, Spell, or themed costumed piece based on the region you’re earning reputation for, in addition to gold and Planar Mana at each level.

Here are the details of the five Regional Reputations shared on the official Magic: Legends website:

A church-state city on the plane of Dominaria, where rolling plains meet dark swamps. The Benalish people are at war with the Cabal fanatics and their demons. Reputation levels earned from Benalia reward you with White Planar Mana. The costume pieces are all part of the Champion’s set, which is as radiant as Benalia itself. A key reward earned through this region’s reputation is the Benalish Heirloom, a Greater artifact that creates a 1/1 human soldier creature token when you heal, gives Lesser Swiftness to creatures you control, and +125 White Mana Buff Rating. The unique spell for this region is Benalish Marshal, which is a 2 point Human Soldier creature that gives +1/+1 to other creatures you control.

A tropical academy on the plane of Dominaria – teeming with aspiring wizards, Homarid beasts, and artifact constructs. Reputation levels earned from activities in Tolaria reward you with Blue Planar Mana. The costume pieces are all part of the Adept’s set, an ensemble visually inspired by the Academy’s bright wizards. Another reward is the Chronicle of Alacrity, a Greater artifact that gives Greater Swiftness to creatures and +125 Blue Mana Creature Potency. The unique spell for this region is the Lullmage Captivator, which is a 2 point Merfolk Wizard creature that can control a nearby foe on the battlefield.

A province on the plane of Innistrad, where the settlements and townsfolk are constantly under attack by the likes of werewolves and undead. Reputation levels earned from Gavony reward you with Black Planar Mana. The costume pieces are all part of the Cecani’s Legacy set, which will let your friends and foes alike know that you are serious about monster hunting. Another reward is the Tome of Gisa, a Greater artifact that creates a 2/2 zombie creature token when you cast a zombie creature spell, grants Greater Swiftness to the zombie token, and +125 Black Mana Creature Health. The unique spell for this region is Creeping Plague, a sorcery spell that does damage over time to enemies in a cone, which also spreads to nearby foes.

Shiv is a volcanic island on the plane of Dominaria. It’s inhabited by Ghitu tribes, goblins, ogres, and dragons. Reputation levels earned within the Shiv overworld and missions reward you with Red Planar Mana. The costume pieces are all part of the Lavarunner’s set, inspired by the Ghitu tribe of Shiv people. Another reward is the Orb of Shiv, a Greater artifact that gives Molten Shell to creatures and +125 Red Mana Sorcery Potency. The unique spell for this region is the Ogre Mortar, which is a 5 point Ogre creature.

The jungle continent on the plane of Zendikar, featuring mystical Hedron stones, massive trees, and lush rivers – inhabited by merfolk, elves, and a host of wild creatures. Reputation levels earned from activities in Tazeem reward you with Green Planar Mana. The costume pieces are all part of the Marksman’s set, a green set that helps you blend into the jungles with ease. Another milestone reward is the Conduit of the Loam, a Greater artifact that gives you a chance to summon a 1/1 Saproling token when picking up Health Globes and +125 Spark Recharge Speed. The unique spell for this region is Bloom of Life, which heals yourself and your allies.

Related: Magic: Legends Reveals What to Expect in the PC Open Beta