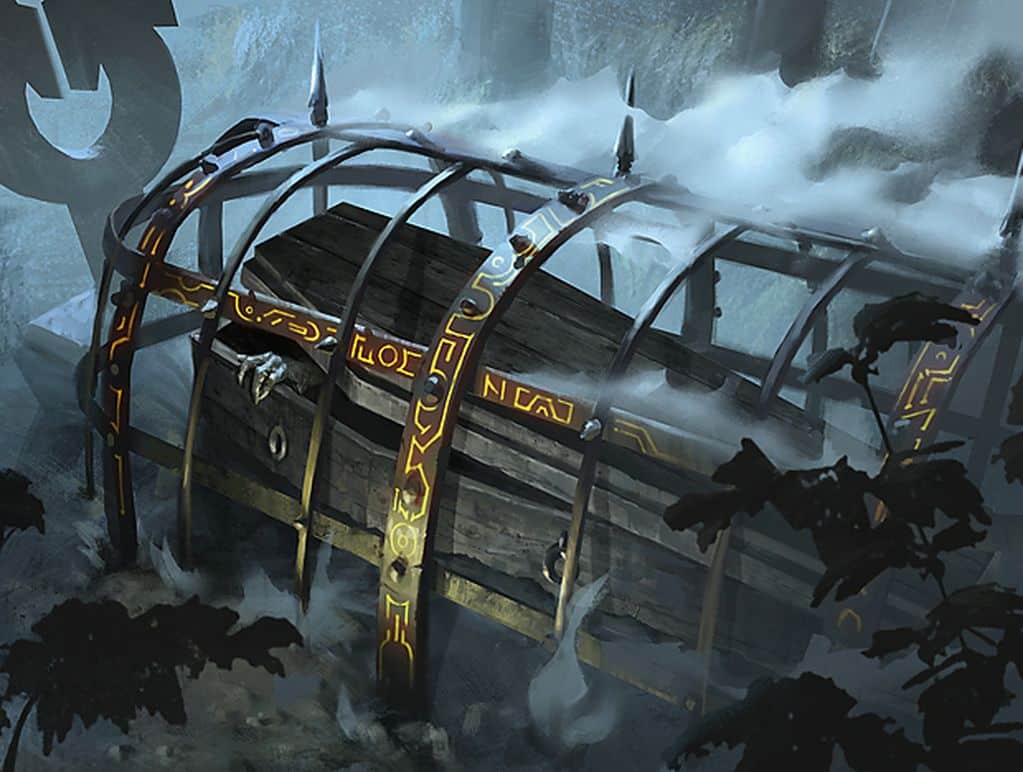 Is this Crazy Prison Leak the Best Card in MTG's Newest Set!?

It’s a story all across the internet if you’re involved with the MTG community: Phyrexia: All Will be One Rare cards are leaking everywhere. Multiple reports across the globe reveal that Rare cards somehow made their way into Dominaria Remastered packs, taking the intended old-bordered slot. We’re slowly filling the gaps on Rares we have not seen, and all sixty of them will be leaked soon. One of these Rare cards looks like a fantastic new prison or hate card that should see Commander play and could see constructed play depending on the metagames. Here, we will go over some of the most practical uses for this card and compare it to other cards with similar effects. Do remember that this is an unofficial leak, so consider this your spoiler warning and a small reminder that this may not be real (but that’s pretty unlikely at this point). Let’s take a look at Soulless Jailer!

Soulless Jailer is an unofficially spoiled card in this Reddit thread for the new Phyrexia: All Will Be One set. The Jailer seems innocent enough but shuts down many of the most popular strategies in multiple formats right now. Admittedly, the card does not do a lot for the current state of Standard (except, maybe, for shutting Unearth down), but that could not be further from the truth for every other format in the game.

Soulless Jailer shuts down permanents in the graveyard from entering the battlefield and prevents players from casting non-creature spells from the graveyard AND exile. It may not seem to be the case, but we do not yet have one card capable of doing all these things. Grafdigger’s Cage may seem like a one-for-one comparison, but it only shuts creatures down from entering the battlefield, as was quickly seen when Greasefang, Okiba Boss started reanimating Vehicles in multiple formats.

Notably, the exact text on this card is pretty important, as it only stops very specific things from happening. If you’re a creature deck that wants to Escape Kroxa, Titan of Death’s Hunger, or cast a creature spell from exile with an effect like Vivien, Champion of the Wilds, you can still do that with this Jailer in play. Here’s all the unique things that the Jailer shuts down and enables in various formats:

While we can give more specific lists for other formats, Commander is too wide-open, so we will instead consider the most impactful thing Soulless Jailer can do in a Commander game: it can, at times, function as a much worse Drannith Magistrate. Soulless Jailer is a symmetrical effect, and it only prevents non-creature cards from being cast in exile. This means that, unlike a past misunderstanding, this will not stop non-creature Commanders being cast from the Command Zone. Still, this can be a neat option in a deck like Urza’s Iron Alliance preconstructed deck that cares about artifact creatures and doesn’t get bothered by any of these abilities much. This also stops a lot of common strategies in the format like:

This card probably fits as a sideboard card in some decks that want to shut down the synergies noted while they can use their own. As of the recent Pioneer results on MTGO, Pithing Needle and Archon of Emeria seem to be the best tools to shut down various strategies in the format. Let’s compare what Pithing Needle and the Archon can shut down and see how Soulless Jailer matches up:

Ultimately, Soulless Jailer can compare to these other hate cards, but the metagame implications will largely depend on whether the card gets run or not. If you want to stop Rakdos Sacrifice, for example, Soulless Jailer can stop the cat oven combo, but it can also get hit by Claim the Firstborn and sacrificed. The jailer can stop a Storm the Citadel from being flashed back but does not stop the Karn and Kiora loops that end the game. Personally, I think Pithing Needle is a better option currently, especially against decks that run creature removal. Still, Soulless Jailer is an option for creature-centric decks that could see some play in the future.

Read More: Huge Phyrexia: All Will Be One Leaks Reveal MTG Story Details

The last point is a pretty important one. Some Colossus Hammer lists currently run Drannith Magistrate as a sideboard piece to address the popular Cascade and Underworld Breach Combo strategies. This also sees sideboard play in Underworld Breach decks themselves because Drannith Magistrate is not symmetrical. Unlike Underworld Breach, however, Colossus Hammer decks do not care about Soulless Jailer being a symmetrical effect. It also stops major Yawgmoth combo synergies, a terrible matchup for the deck. Soulless Jailer is also a creature, which means Hammertime decks can use it as a win condition, nullifying perhaps the most significant thing holding this card back: its terrible Power stat.

The last big point in Soulless Jailer’s favor is its toughness. Four toughness in the Modern format is enormous because it dodges the ever-present Lightning Bolt, something that Drannith Magistrate cannot. It still dies to a Fury or an Unholy Heat with Delirium behind it, but it is, regardless, a major point in the Jailer’s favor. While a smaller point, Soulless Jailer is also capable of blocking a Ragavan, Nimble Pilferer in the early game.

A lot of the MTG community talking about Soulless Jailer are pretty intrigued with the card’s design. Many take the stance that this is a product of the design mistake that was Drannith Magistrate in Commander:

“I think the answer’s simple – they didn’t want it to be a hate piece against commanders, adventure creatures etc.” – exploringdeathntaxes

That said, a lot of people find it very strange that Soulless Jailer allows creature spells to be cast from the graveyard:

“It feels weird that it stops reanimation (not cast) and stuff like flashback (cast) but it specifically doesn’t interact with casting creature spells from the yard. I guess it stops cascade decks unlike Grafdiggers [Cage]? The design space for these sort of sideboard designs seem wide but kind of annoying to keep track of.” – KoyoyomiAragi

While this may feel unintuitive to those who aren’t super familiar with the MTG rulebook, it’s actually a run-of-the-mill issue for sideboardable hate fodder cards like this one. A level two Judge breaks it down in a fantastic way:

“I think the reason why this feels weird is mainly because so far this type of hate card has either only cared about casting or entering, or cared about both in the same way. It’s weird that this prevents both but for one its permanents and for the other its noncreature.
For example, does it feel weird that Ashes of the Abhorrent still lets you reanimate stuff? Or that Drannith Magistrate still lets you flicker things? Or that Archon of Emeria lets you cast a spell and then also reanimate a creature with an ability?
I think mentally this card feels less like any of those and more like a Grafdigger’s Cage, so we mentally don’t parse it as “This stops X, but that doesn’t include this other similar thing” and more like “you can’t do anything like X, well except this one niche corner case”, which feels a lot more tricky and unexpected” – Shikor806

People are Already Brewing With it

If anything, many MTG players are excited about what Soulless Jailer may be capable of. There are already some obvious spots where this card can see play, so many of the community is certain that the card will find a home somewhere:

“Hmm I sometimes run Urabrask in Bard Class, which runs very few noncreatures. This might be worth including.” – chrisrazor

I, personally, will probably be adding this into my Urza’s Iron Alliance upgraded preconstructed deck. Otherwise, I’m more worried about seeing Soulless Jailer on the other side of the board, as it shuts down many of the synergies I bring to the table.