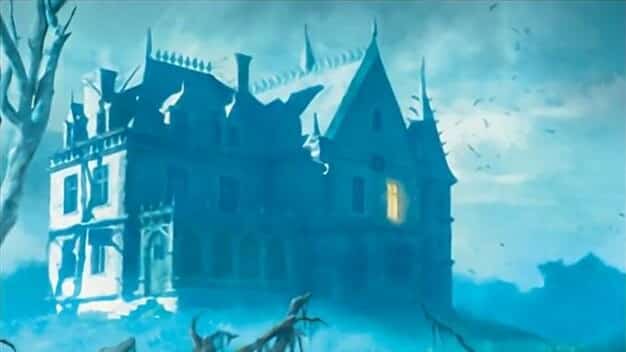 Magic: The Gathering is literally constantly throwing new cards at us at a rate that makes it hard to really fathom. Gone are the days where we’d all be able to recite the last set off by heart, and instead, lots of cards slip through the cracks despite being great for a deck we love, or just interesting in some way.

There are a lot of great cards in Innistrad: Midnight Hunt that we’re really hoping manage to see play, but one that we’re not expecting to do so also happens to be one of the most entertaining new cards we’ve had in a little while. We are, of course, talking about Hostile Hostel.

What is Hostile Hostel?

Hostile Hostel is a brand-new mythic land that adds one colorless mana and has an excellent name. Hooray, that’s it, we can wrap it all up people. That’s the end of the article, we just think it’s got a cool name. Alright, obviously that’s not the case, Hostile Hostel is a fascinating new land that can turn into a gigantic creature, and the whole deal with it is legitimately intriguing.

So, along with tapping for mana, you can also pay one, tap it, and sacrifice a creature to “Put a soul counter on Hostile Hostel. Then if there are three or more soul counters on it, remove those counters, transform it, then untap it. Activate only as a sorcery.” Now, we like this ability just because it lets us sacrifice things, but it is a real shame that you can only do it as a sorcery. We’re assuming this is less to put things in your control, and more to make sure you can’t transform it as a combat trick.

The transformed state of this card is called the Creeping Inn, which is also a sublime name. In this form, it’s a 3/7 that allows you to pay four mana to phase it out, which is definitely excellent protection. Along with that it reads, “Whenever Creeping Inn attacks, you may exile a creature card from your graveyard. If you do, each opponent loses X life and you gain X life, where X is the number of creature cards exiled with Creeping Inn.”

Now, let’s try and break this down. As a mana source, Hostile Hostel is fine, not great, not bad, it’s just colorless. That’s only one function though. As a sacrifice outlet, it’s not bad. Having to only (effectively) pay two mana to be able to sacrifice a creature using a land isn’t a bad rate, and while the payoff takes a few turns, more often than not, sacrificing something is going to be its own reward.

Creeping Inn is also a big old creature. While it’s not huge on the front end, seven toughness is very hard to just push through, and the ability to phase out means you can protect it from, well, everything. Also, the strength of it isn’t in the power itself, but the ability to drain every other player for life. While it does take a few turns for this to be all that relevant, it does offer an interesting line of attack for a lot of decks, and if you can copy the trigger itself, then you can potentially turn this into a viable threat quite rapidly.

We’re not necessarily saying you should put this in all of your decks, but we do think it’s interesting enough to be worth your attention at the very least, and we’re secretly hoping someone manages to pull off an impressive win with it. Look, everyone deserves a pet card, even if that pet happens to be a gigantic evil building.