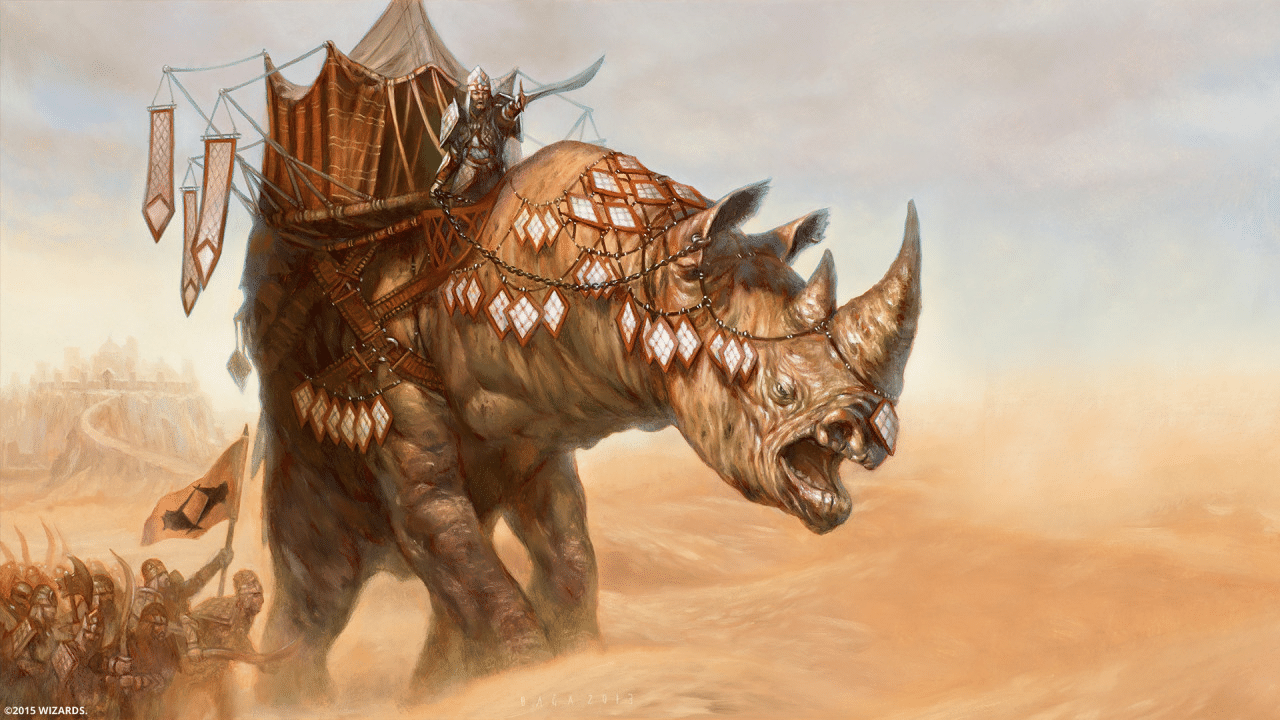 Do You Remember When Siege Rhino Was Overpowered?

I started playing Magic back just before Magic Origins released. That means I’ve been playing for around six years. Well, actually I started playing a few years before that before the original Theros block, but I didn’t find my way into an FNM until Origins, so I count that as my actual starting point.

In that time, the game’s changed so substantially as to be nearly unrecognisable. Permanents are all that really matters most of the time now, and while that’s fun in some ways, it means that the power level and ability of creatures, mostly in green, has changed a lot. So much so, in fact, that it has me wistfully looking back at the big bad of that era of Standard.

Do you remember, Siege Rhino?

Siege Rhino is a four mana white, black, and green 4/5 with trample. Alongside that, when it enters the battlefield, each opponent loses three life, and you gain three life. Frankly, this thing killed an awful lot of us with its ETB trigger, but it was also a hard thing to stand against because it had trample.

It was the demon of this era of Standard. A card that was so hated in my local game store that anyone who played it did so while apologising. Players were split into those who played Siege Rhino, and those who were just trying to have some fun, and there was no in-between.

Ignoring how absurd we all were back then, it’s really hard to believe that such a simple creature could be the big bad of the time. Sure, cards like Crackling Doom and Jace, Vyrn’s Prodigy were also monstrous, but Siege Rhino sat atop them all as a regal rhino that couldn’t be defeated. It inevitably found its way to the top of your opponent’s deck whenever you had three life left, and we never forgave it. Now though, it’s hard to imagine it making waves at all.

There are two cards that are comparable to Siege Rhino, and while they’re both Mythic Rare cards instead of Rare ones, I really do think they show off how much has changed in the last few years. The first one is Elder Gargaroth, a five-mana green 6/6 with vigilance, reach, and trample. Then, whenever it attacks or blocks, you can either make a 3/3 token, gain three life, or draw a card. Isn’t that silly?

Then you’ve got Uro, Titan of Nature’s Wrath. For three mana, you get to draw a card, gain three life, and then put a land into play, but to actually get it to stick to the battlefield you have to pay four mana instead. At that point, you get the above effect every time it attacks, and it’s also a 6/6.

Again, we know these are both Mythic Rares, but it’s very clear that times have changed substantially. It’s not necessarily a bad thing, but it must be odd for players who’ve been away for a few years to come back into a game they love, but one that’s not like it used to be.