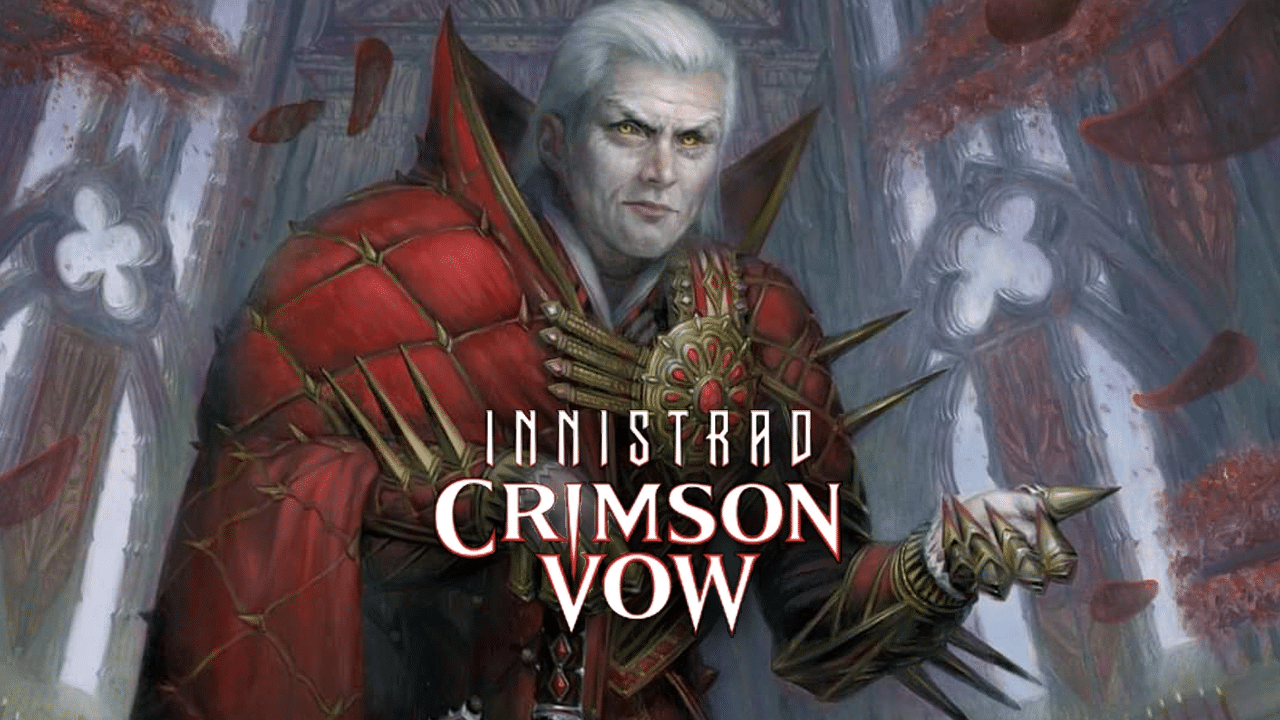 Magic: the Gathering‘s newest expansion, Innistrad: Crimson Vow has just released on Magic Arena. The main theme of this set is Vampires, and just as we did with Midnight Hunt for Werewolves, we have to build a deck around the theme. Today we’re going to have a look at a take on Vampires in Historic that looks to leverage some new Vampires from Crimson Vow.

The deck that we’ll be checking out today is Collected Company Vampires. This is a very aggressive deck that looks to flood the board out with creatures. There’s a couple new cards in this deck that are really cool.

The first new card that we’re looking to play is Welcoming Vampire. Nearly our entire deck are creatures that are power 2 or less, so we should always be drawing cards with this. This is also a flyer, so we have some evasion. This is our main source of card advantage.

Our second new card from Crimson Vow that we’re using is Edgar, Charmed Groom. Edgar is one of our vampire lords, while also being a solid body. Additionally, when Edgar dies, it’s transformed into his coffin, and it can help us keep a board presence, even if it’s a token a turn.

The squad has quite a few strong players. Knight of the Ebon Legion is one of the best 1 drops that black has in general, and it’s perfect for this deck. Another great 1 drop for the deck since it has deathtouch so it’s likely to get in damage, but it also has lifelink to help us stabilize if needed.

Our 2 drop slot has a quite a few great cards in it as well. Legion Lieutenant is another lord for our deck, plain and simple. Dusk Legion Zealot is another source of card draw. Adanto Vanguard is a sticky threat that is fantastic against control, and we can trigger our Knight of the Ebon Legion as well. Cordial Vampire ties everything together. This basically lets us attack or block in combat with very little fear as this can help pump our team up.

To top everything off, Sorin, Imperious Bloodlord is a great option for tempo plays. We can cheat in an additional vampire like Edgar, we can trigger our Cordial Vampire with his second +1, or just pump the team if we need to.

I’ve chosen to include Collected Company in the deck because one problem that the deck does have is playing from behind. Since we have a ton of creatures, and not a ton of card advantage engines, CoCo is that solution. In Historic, it isn’t a hard to make this work, since we have a great mana base.

Our other way to help us play from behind a bit is Agadeem’s Awakening. This gives us a little bit of recursion from our graveyard, and considering that we have a high density of 1’s and 2’s we can often get back a full blown board.

READ MORE: Best Cards to Buy For Toxrill, the Corrosive in Commander

I haven’t put a sideboard together for this deck but I’d imagine that some cards like Thoughtsieze, Duress and removal would make sense to have. I think that it also makes sense to have Soul-Guide Lantern to deal with opposing graveyards.

The other card that I might think about would be some way to protect our creatures. I’m going to throw a spicy option out there, but Teferi’s Protection is a card that could help us out a ton in the event of a board wipe. I would also think about Heroic Intervention. Since we’re playing 7 Green sources in the deck, we can probably fit it in the sideboard.

I think that there’s a place for this deck to shine in the format. Having some new toys to play with in the deck thanks to Crimson Vow really gives us the needed push to make this deck a bit more viable. Definitely give this one a shot if you’re into Vamps!