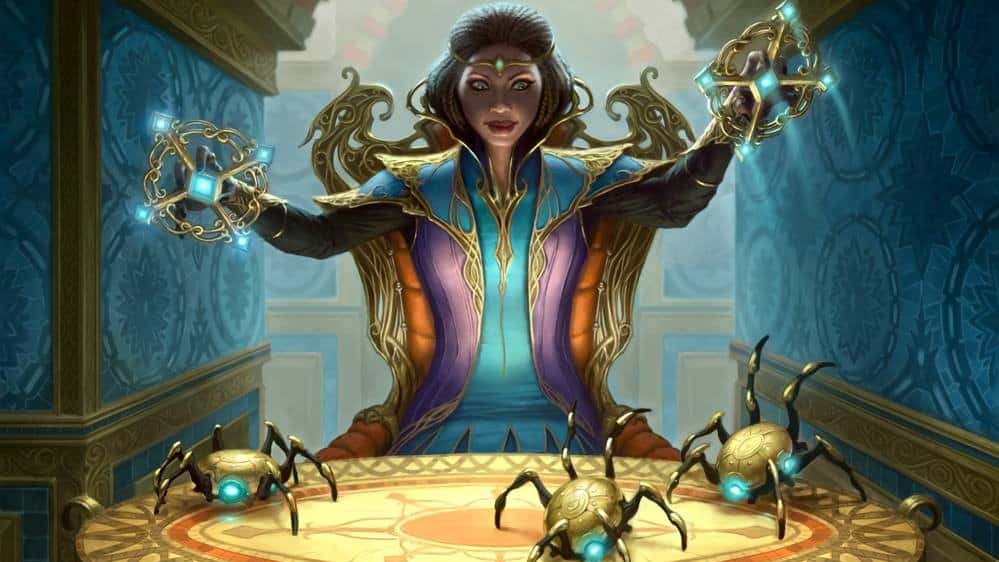 It’s once again time to pick a card and find some commanders for it. Today, we’re going to be looking at an oddity from Kaladesh.

This card is one that many people still don’t really appreciate the power of, but it’s also one that can absolutely win the game in the right decks.

What is Marionette Master?

Marionette Master is a six-mana 1/3 creature with fabricate three, which means it can either come in with three +1/+1 counters or make three Servo artifact tokens when it enters the battlefield. Along with that, it reads, “Whenever an artifact you control is put into a graveyard from the battlefield, target opponent loses life equal to Marionette Master’s power.”

So, your choices here are to either make a lot of tokens and sacrifice them, or bolster Marionette Master to be stronger and sacrifice fewer tokens. You could also lean into an aggro artifact strategy too. While it seems like a simple card at first, recent sets have allowed this card to truly soar.

So, let’s dive into the two commanders we’ve picked for this six-mana puppeteer.

Read More: Is Land Destruction In Commander Good Or Bad?

We’ve got two Commanders for this one as they both have partner. First is Armix, Filigree Thrasher, a three-mana black 3/2 golem that reads, “Whenever Armix, Filigree Thrasher attacks, you may discard a card. When you do, target creature defending player controls gets -X/-X until end of turn, where X is the number of artifacts you control plus the number of artifact cards in your graveyard.”

For Golems, we recommend Vital Splicer, [tooltips]Maul Splicer, Bottle Golems, Clay Golem, Phyrexian Triniform, Triplicate Titan, Salvage Titan, and Golem Foundry. All of these make or are Golems and will help you flood the board with creatures you’ll be buffing up. On the +1/+1 counter side of things, Hardened Scales, Winding Constrictor, Forgotten Ancient, Primeval Protector, Vigor, and Branching Evolution will all bolster your efforts greatly. We think you can get the rest of the strategy here, just turn things sideways, make your things big, and win the game.

Read More: 2022 Is The Best Year To Stick To One Format

Master of the Fae-Cursed King

Korvold, Fae-Cursed King is a five-mana black, red, and green 4/4 with flying that reads, “Whenever Korvold, Fae-Cursed King enters the battlefield or attacks, sacrifice another permanent. Whenever you sacrifice a permanent, put a +1/+1 counter on Korvold and draw a card.” Now, you can certainly use the +1/+1 counter stuff from the above duo here, but honestly, you should be going all-in on treasure with Korvold.

That means looking at cards like Kalain, Reclusive Painter, Old Gnawbone, and even the likes of Prosper, Tome-Bound if you want to. Anything that creates treasure tokens is a great way to get extra artifacts out, and the more artifacts you have to sacrifice, the easier it is to trigger Marionette Master.

Korvold is already a stupidly powerful commander as it is, so when you then combine them with treasure tokens and a win condition like Marionette Master as well, you end up with a deck that’ll often feel cruel to play. You’ll also likely end up the target a lot of the time. On the plus side though, it’s highly unlikely anybody will actually be able to stop you.