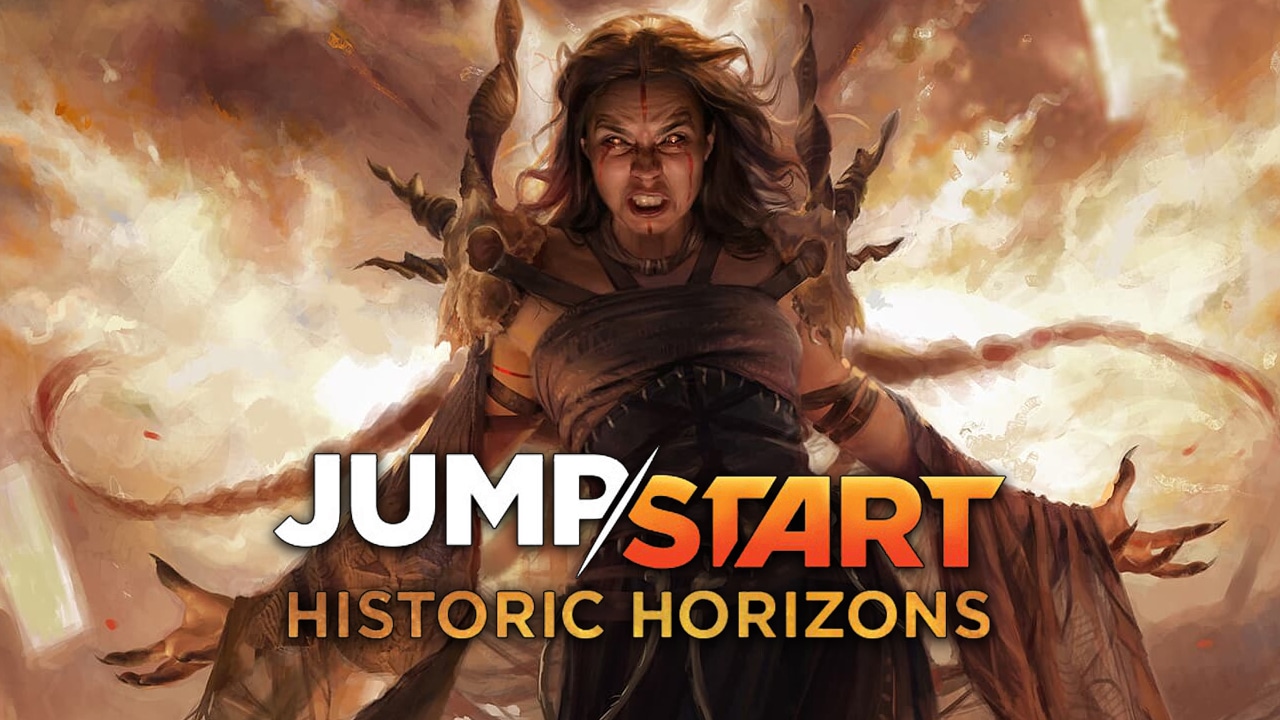 We are 1 week away from the release of Jumpstart: Historic Horizons on Magic Arena, which is the new Historic Only set that has over 700 cards and about half of them are new to Arena. We did a list of 5 decks that we’re excited to play with the new set, but that was last week, when we had very little of the set previewed. We now have the whole thing previewed and we can update and add new decks to that list! Here’s 10 new Historic decks to try with the release of Jumpstart: Historic Horizons.

Our first deck is Coco Slivers. We got a bunch of Sliver support in the set, and the best ones lend themselves to being Naya colored. Most of these are 3 mana or cheaper so Collected Company fits right in. Our goal is curve out into our slivers, have them boost each other up, and slam with a wide board. We also get Sliver Hive which can help fix our mana, but also create a Sliver token to add to our army in the late game.

Next up is Coco Elves. This elves deck is pretty typical but if you’ll notice, there’s only 57 cards in this main deck. The missing card is the new planeswalker Freyalise, Skyshroud Partisan.

This new “digital only” planeswalker is the strongest of the 5 and fits really nicely in the elves deck. It can help us find more elf fuel, make some of our creatures bigger, and if we get to her ultimate, we create a Regal Force. That puts a decent sized body on the board, and hopefully draws us a ton of cards. This may not be necessary but it’s an awesome back up plan

Mono Red Hollow One is a deck that had seen some experimentation with when Faithless Looting was released in the Mystical Archives, but it didn’t have everything it needed to be good. With Historic Horizons, we got some great new additions to the deck with Dragon’s Rage Channeler, Blazing Rootwalla, Insolent Neonate, and Fiery Temper. Our goal is to discard some cards very cheaply, and try to get a Hollow One down really early.

Our first Humans deck of the list, is Mono White humans. This is definitely more of an aggressive style deck that looks to curve out some cheap humans and beat in really quickly. We get a bunch of new amazing additions to the deck from Historic Horizons, namely Blade Splicer, Esper Sentinel, and Thalia’s Lieutenant. We also get one of the best comeback cards for this deck in Return to the Ranks which can help us rebuild from a sweeper.

One of the decks I’m the most excited to try out is Enchantress. We got some of the powerful Modern Horizons 2 support for the archetype that helped propel this deck into the spotlight in Modern. Our goal is to play a bunch of cheap enchantments, gain some life and draw some cards with Sythis, Harvest’s Hand and Enchantress’s Presence, and make some massive land creatures with Destiny Spinner.

Next up is Azorius Tempered Steel. This list is a little different from the one in our last article, but this archetype got some major buffs. Our big 3 new cards are Esper Sentinel, Nettlecyst, and Thought Monitor. This is an artifact based aggro deck that looks to abuse Tempered Steel to buff our creatures, and with our new cards, the deck gains more speed and consistency.

Our second Humans deck is 4 color humans. This version of the deck is a bit more on the “control” side of things, as we play cards like Kitesail Freebooter, Meddling Mage and Silverquill Silencer. The mana on this is a bit tricky, but Unclaimed Territory helps smooth that out a bit, though this deck would really benefit from Aether Vial.

Merfolk has been an archetype that has existed in Historic for a while, and early on in Historic’s life cycle, the deck had some legs. It has since fallen off and despite the inclusion of Collected Company, the deck couldn’t come back. In Historic Horizons, we got a couple new powerhouse cards to hopefully boost the deck to prominence again. Master of the Pearl Trident is another 2 mana lord for the deck, and while we can’t take advantage of the Islandwalk as consistently as in Modern, it’s still very strong. We also got Svyelun of Sea and Sky, which helps us draw cards and protect our other Merfolk.

Our penultimate deck is Izzet Blitz. Again this one changed from our last list on this, but our goal with this deck is to go fast. We want to get delirium online as fast as possible, and really take advantage of our aggressive creature base. We’re including Chromatic Sphere in the list as an artifact for delirium, and it can help us with fixing mana where necessary. This is one of the strongest decks in the Modern format, and I expect that some version of this deck will make waves in Historic as well.

Our last deck is Rakdos Lurrus. This deck looks to abuse Dragon’s Rage Channeler but we also want to disrupt our opponent’s hand and keep the board clear with removal. This is a really strong deck in the Modern format, and the deck looks really strong and some version of this deck will be a strong contender in Historic.

READ MORE: How to Start Playing Historic on Magic Arena