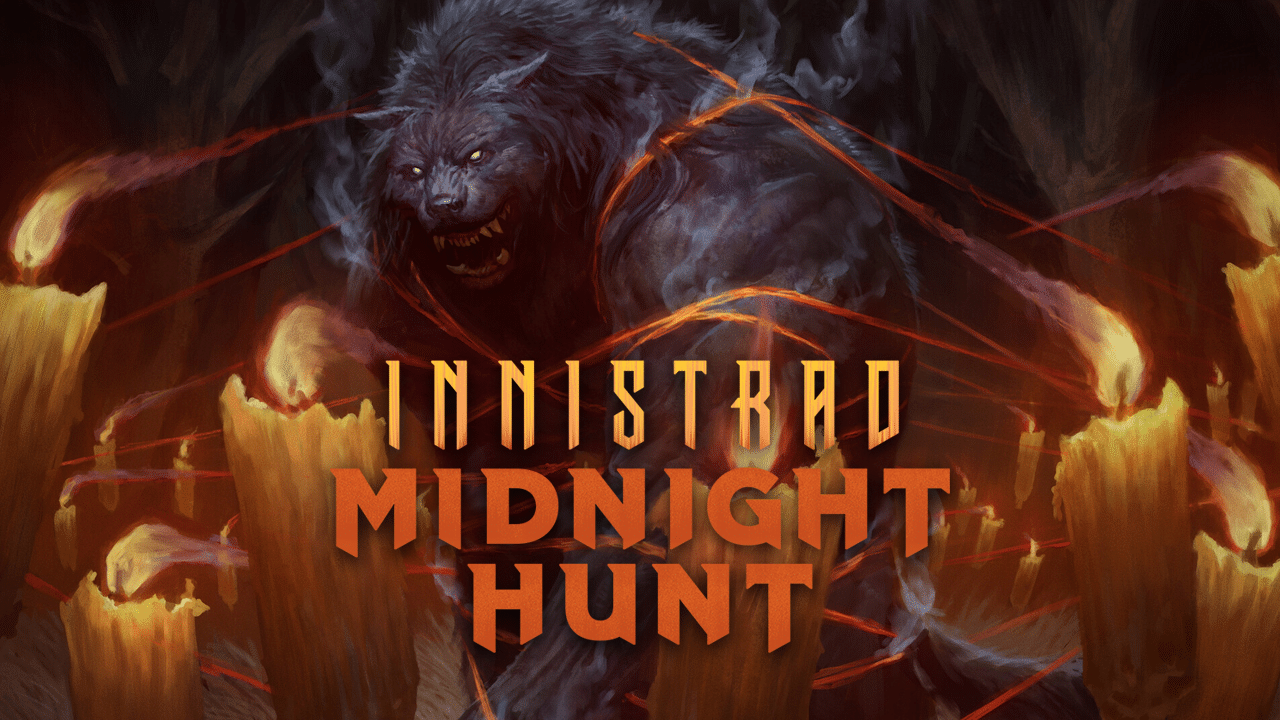 Now with the tabletop release of Innistrad: Midnight Hunt, players will be battling in limited with the brand new cards. Original Innistrad is regarded as one of the most loved limited environments of all time, and this third return is shaping up to be great as well. Here’s everything you’ll need to know heading into your first Draft or Sealed.

There are a few different mechanics that you’ll be seeing in your packs:

Daybound / Nightbound is the upgraded Keyword version of the Werewolf Transform ability. Primarily working with Werewolf cards, other cards will interact with the Day and Night cycle. This mechanic involves either casting no spells on your turn, or casting 2 or more spells to change the Day / Night phase.

Coven is a new mechanic to Innistrad: Midnight Hunt. This involves having 3 creatures on the battlefield with different power values. This ability primarily shows up on Humans, but there’s also instants and sorceries that have this ability as well.

Decayed is also new to Midnight Hunt. Decayed primarily goes on Zombie Tokens, but there’s some cards the give other creatures Decayed. Decayed Creatures cannot block and after you attack with them they get sacrificed at the end of combat.

Disturb is a mechanic that interacts with non-Daybound / Nightbound dual-faced creatures. When a creature with Disturb is in your graveyard, you can cast the creature from there for it’s Disturb cost. It enters the battlefield transformed, and when that creature would be put into a graveyard from anywhere, it get exiled instead.

Flashback is a returning mechanic to the set. Flashback is like Disturb but for instants and sorceries. There’s many different color of spells that have flashback, so this could be a pretty flexible mechanic to squeeze in.

Innistrad: Midnight Hunt is a heavily tribal creature themed set, so naturally we want to build around these tribes. Here’s the color combinations for these tribes

Blue and Black both have a fair amount of Zombie creatures, and some really awesome tempo oriented spells. Many of the zombie are commons, so they should be easy to come by. You’ll ultimately want to find Bladstitched Skaab or Champion of the Perished to really give the deck some extra fight, but the common zombies aren’t too bad.

Green and Red are the Werewolf colors. With this set being heavily themed around Werewolves, there are plenty of great options in the common and uncommon slots for these decks. The Rares and Mythics are incredible and this is, I think, the strongest deck option as they curve out nicely and many of their creatures are rather pushed.

Red and Black is the Vampire colors. This deck seems that it wants to be a bit more aggressive, and has a bunch of cheap spells that interact with Vampires that help pump in some damage. This one is a bit tricky because some of the tribes best creatures are Rares or mythics, but if you find Vampire Socialite, that’s a really good early game lord that puts in a good place.

Green and White are the Humans / Coven colors. The Coven deck is another aggressive slanted deck, but likes to play with the Coven ability. There are a lot of great rares for the tribe, but a lot of the commons and uncommons are quite good. Really if you can build a deck with Coven as a focal point, it should bring the deck up in power.

Blue and White are the Spirits colors. Many of the cards in this deck are going to be Disturb cards. There are some single sided spirits in Blue as well. This deck does have access to a great card in Faithful Mending, allowing it to play from the graveyard a bit easier as well.

The next archetype is Blue and Red Spellslinger. There are a lot of cards that align themselves with casting instants and sorceries. Thermo-Alchemist and Delver of Secrets come to mind and are going to be high caliber picks for this deck. There’s also plenty of solid cheap removal, card draw and counter magic in the set.

This one is a bit tricky to build, but it revolves around getting a bunch of [tootltips]Dawnhart Rejuvenator[/tooltips]s, some Path to the Festival and Rootcoil Creepers. Since 2 of these are commons, they should be pretty easy to pick up. From here you can be a bit more flexible with picking up the vast amount of multicolor cards in the set. You may not be 5 colors, but you can play a more than 2 colors pretty comfortably.

Best Filler Cards in Each Color

Now because these we have these tribes that should steer the direction of your deck, that doesn’t mean that there aren’t great cards to flush out the rest of the deck. Here’s the best cards from each color that you should be looking for.

First off Fateful Absence is a powerful removal spell. It’s very cheap, and while it is a rare, if you’re in white, this is a really solid pick up. Sunset Revelry is a mini Timely Reinforcements and can be really helpful in a pinch. Sungold Barrage is great to take down big blockers that get in the way of your smaller creature army, and Blessed Defiance is a great combat trick to help gain some life and possibly keep a board presence.

For the Blue decks, there’s quite a few good cards to pick up. Otherworldly Gaze lets you set up your draws by purposefully putting cards into your graveyard that you don’t want to draw, and stacking the rest in any order. It also has flashback which can be great in the late game. Consider does something similar, but this draws you a card. Vivsection is a great draw spell, especially since there’s a few decks that utilize tokens.

Fading Hope is an excellent tempo spell that can let you set up your next draw, and Dissipate is an awesome counter spell. Exiling the card that’s countered is very relevant in this format.

For Black, there are two really choice removal spells in Infernal Grasp and Foul Play. Black also gets to play a bit at instant speed with Blood Pact. Necrosynthesis is a very interesting card, but one that can offer some solid card selection and can beef up a creature to great heights.

For our Red cards, Cathartic Pyre is a great card. Having the Flexibility of removal or draw is very important. Immolation can fill a similar role as removal, but if you have to push through a few more points, this can get the job done.

Lunar Frenzy is a bad Temur Battle Rage, but that’s a high bar to meet. It’s a very solid combat trick that can scale very well in the late game. Stolen Vitality is also a great combat trick. This lets your creature block favorably in combat, or push through some surprise damage and clear up blockers. When you combine this with a deathtoucher, you’ve got a beefy machine gun.

In Green, Timberland Guide is a nice early creature that can make your 1 drop plays a bit stronger. Defend the Celestus is an incredible combat trick. Your opponents will have to consider that your team will get larger when you’re attacking

Clear Shot is a 1 sided fight spell, which is always a great effect. Giving your creature +1/+1 as well is a nice bonus. Bounding Wolf is a great surprise blocker. Having flash and reach gives it the versatility to block anything basically and probably trade efficiently too.

Last up for our Multicolored cards, Sacred Fire is a baby Lightning Helix that has flashback, which is quite nice. It often will trade in the early game and can make combat a bit tricky in the mid and late game. Rite of Oblivion is great in the control deck that wants to exile any nonland permanent.

Diregraf Rebirth acts as a Unburial Rites, and depending on the situation can be rather cheap. Croaking Counterpart is a fun copy effect that could let you make copies of some powerful attack trigger or death trigger creatures. Plus it has flashback, which is a nice touch.

Innistrad: Midnight Hunt is shaping up to be a really awesome limited environment. With this guide, you should now be equipped to head to prerelease this weekend, and play some of your Magic Arena drafts with more knowledge and confidence.