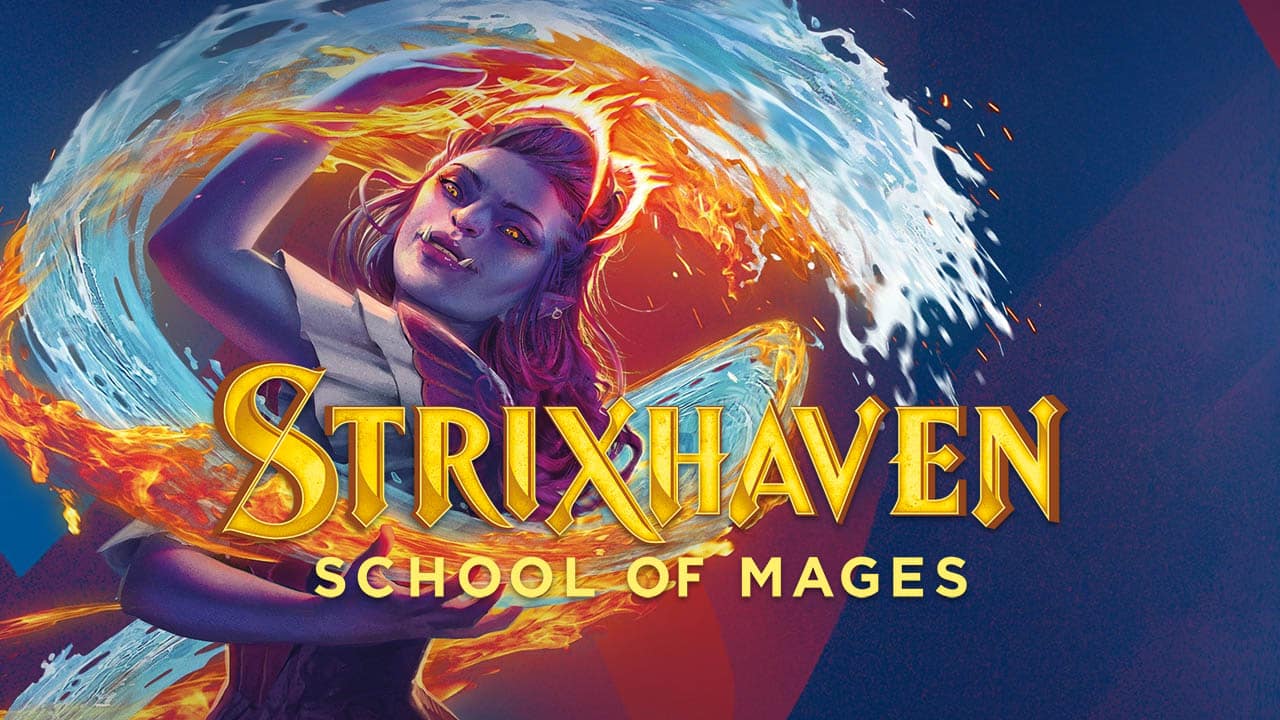 Magic: The Gathering Arena recently launched Strixhaven: School of Mages, and now fans are enjoying the brand new cards representing the five colleges of Strixhaven University each associated with a two-color pair: Quandrix (blue/green), Witherbloom (green/black), Silverquill (black/white), Lorehold (white/red), and Prismari (red/blue). One of the best ways to enjoy the new set in MTG Arena is Booster Draft, where players can focus on building a deck around a particular college. While each one of them has their own strengths and powerful bombs, I think the most enjoyable to play is Prismari because of its big explosive spells, Learn cards, and evasive creatures.

There are also a few Lesson cards in my sideboard (not shown here) like Expanded Anatomy, Introduction to Annihilation, Introduction to Prophecy, and Fractal Summoning, but I did not end up drafting a single copy of Elemental Summoning, which I think is a strong early pick for a common card. Learn cards like my 2 copies of Academic Dispute, Igneous Inspiration, and Enthusiastic Study helped me gain card advantage while providing answers to opponent’s threats. My two rares are Dream Strix and Efreet Flamepainter, which helped me win some of the games, but my main win condition was a common: Elemental Masterpiece, and I managed to draft 3 copies of it.

I think the main goal of Prismari in draft is to play some early threats while gaining tempo and card advantage with Learn and Lesson cards. Small creatures Prismari Apprentice and Hall Monitor can help bring early damage in thanks to their evasion abilities, and I think they’re fantastic targets for the Lesson card Expanded Anatomy, which gives two +1+1 counters on target creature and gives it vigilance until end of turn, plus since it’s a sorcery, it triggers Prismar’s Apprentice’s Magecraft.

This two-to-cast 2/2 creature is amazing at getting damage through with its Magecraft effect. As I mentioned earlier, Lesson cards like Expanded Anatomy or Fractal Summoning can give this unblockable, and if you play any of the big sorceries or instants (Prismari has a lot of them!), it gets a +1+1 counter. At one game, I managed to make it a 5/5 and my opponent used his removal on it. Not bad for an early threat with great late-game potential.

Rootha, Mercurial Artist’s ability can give you significant advantage as it can copy a spell when you return it to your hand. Her 1/4 body can provide solid defense against early threats while you build up mana for a bigger spell you can copy. The fact that you can repeat this when you play this spell again can definitely help you win games.

If you’re playing Prismari, there’s a good chance that you will have a Cleric, Druid, Shaman, Warlock, or Wizard in play so most of the time, you will probably get to copy Mentor’s Guidance. Being able to Scry twice, and draw two times for 2 mana is great enough, but it’s more insane if you have creatures with Magecraft that can trigger twice with this card’s effect.

This is probably the best one-mana uncommon Wizards of the Coast printed in a while. It’s probably not going to see much Constructed play but in Limited, this card is awesome. The versatility of forcing your opponent’s creature to block or giving your creature reach at instant speed while being able to Learn makes this one of the best uncommons for Strixhaven draft. At one game, I managed to kill an opponent’s flyer by giving my creature reach with this card, and block.

Snow Day is one of the game-winning spells that can help clear the way for your creatures to attack while giving you a bit of card advantage. It costs six mana so I’d probably just run 1 to 2 copies of this card.

While Prismari has big explosive spells, the main challenge is getting enough mana so you can cast them. Maelstrom Muse does the job when you attack it, and its Flying 2/4 body is excellent for mid-game situations.

Igneous Inspiration is one of the best red removal cards you can include in your Prismari deck. 3 damage to any target for 3 mana is always good, and it also lets you Learn so this card is definitely worth playing even if it’s sorcery speed.

Seven mana seems a lot to cast a removal spell but in a Prismari draft build, Creative Outburst works. You also get to net a card from your library after the burn effect, and note that it deals 5 damage to any target, so if you get this late game, and if you can’t win via combat, you can always burn your opponent directly with this. If you can’t cast it early enough, you can just discard it to make a Treasure.

Like a lot of Learn spells in Strixhaven, Divide by Zero can give you good tempo and card advantage.

Hall Monitor is brilliant in helping you get combat damage through. I was able to sneak in significant damage in my matches thanks to this Lizard Shaman’s activated ability. This is probably the best one-to-cast creature you can include in a Prismari draft deck.

Eight mana!? No problem! Prismari has a lot of ways to help you ramp up to play your big spells, and Explosive Welcome is definitely worth casting. You can kill two creatures or kill a creature and deal damage directly to your opponent, so it’s pretty versatile and powerful.

Hands down, Elemental Masterpiece is one of the main reasons why you should draft Prismari. Being able to make two 4/4 Elemental tokens for seven mana can provide enough threats for you to finish the game, and if you’re behind, these creatures are big enough to block most creatures. I ended up running three copies in my 7-win draft deck, and at one time I had two copies in my hand, but only five lands. I discarded one of them, so I could cast the other once I get my sixth land. In another match, my opponent used up his removals on the first two 4/4 Elementals but when I played the second Elemental Mastery, he was exhausted, so he conceded.

If you’re playing any red deck in Strixhaven draft, Heated Debate is definitely one of the best commons you can draft. It doesn’t let you Learn like Igneous Inspiration but it’s Instant speed and can’t be countered for only three mana.

The best blue common creature in Strixhaven draft is Frost Trickster for obvious reasons. For 3 mana, you get a 2/2 Flying body that can slow down your opponent’s early threats, so you can buy enough time to play your bigger spells and creatures.

Elemental Summoning is always a great draft pick for Prismari-focused decks, especially when you manage to draft enough Learn cards. This is one of the commons I would prioritize in Pack 1 if there are no better cards or bombs. Having this in your sideboard ensures that you have a means of making a big enough creature. Fractal Summoning is also great, and can also be used in Prismari decks.

Bury in Books is an excellent “tempo removal” instant that could annoy your opponent when he thinks he’s about to win. Most of the time, you cast this for only 3 mana but you can still trigger Prismari Apprentice Magecraft ability to get +1+1 counters since it costs 5 mana even though you only have to pay 3 if you’re targeting an attacking creature.

Combat tricks that can give your creatures first strike can always be effective in draft, and Sudden Breakthrough does the job well while giving you a Treasure token that can help you ramp up mana to cast your bigger spells.

Spectacle mage is a good three-drop creature to have in a Prismari deck. In addition to its Flying ability, it can also help you cast instant or sorcery spells with mana value 5 or greater, so if you have two copies of this card, you can cast Elemental Masterpiece for only 5 mana! Who says you need green to mana ramp?

Enthusiastic Study is one of the best instants you can use to boost up your creatures, and get damage through by giving your creature trample and a significant power boost, and it lets you Learn as well! Be careful though because you don’t get to Learn if the creature you’re targeting is killed in response to casting this spell.

Oggyar is not a game-winning card but for a 5-mana 3/4 creature with Haste that could Scry 1 the turn it comes into play offers a lot of versatility, especially in the late-game when you need to top-deck a game-winning card to get the advantage you need.

Strixhaven draft is spell-heavy. It’s a set themed around sorceries and instants, and there are Mystical Archive cards you can draft, so Lore Shredder will have a lot of spells to shred from your graveyard, and it can get big fast. Plus, it got Haste, so if you can activate it right away once you play it.

This is one of the best two-drop cards you can play in a Prismari deck. A 3/3 body can provide strong defense against early threats, but the fact that it can attack when Magecraft triggers can also help you get early damage through.

Your opponent’s flying creatures can be problematic, but Pillardrop Warden stops them thanks to its 1/5 body and reach ability, but wait….there’s more! It also has an activated ability that lets you return an instant or sorcery card from your graveyard to your hand. One time, I sacrificed this card to get my Elemental Masterpiece to deploy more 4/4 elementals and win the game.

What do you think about the Prismari draft archetype and these commons and uncommons? Let us know in the comments section below.

You can watch my first Strixhaven Draft stream below:

Strixhaven: School of Mages is now available on MTG Arena.