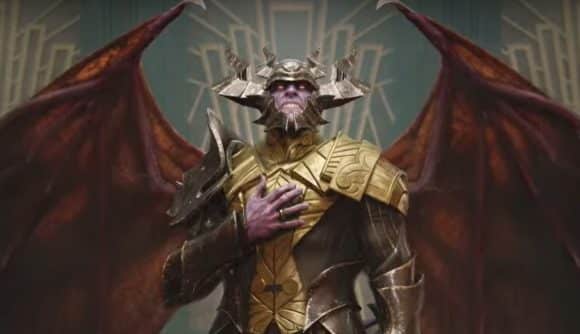 Commander is one of Magic: the Gathering‘s most popular format. Wizards of the Coast prints a bunch of products that are dedicated to the format, and those commanders usually become very popular. But as a side effect of being put in a Commander focused product, it leaves very little room for those commanders to be reprinted.

Well today, some datamined images were posted to Reddit that show what looks like new art for 2 very popular commanders. What’s interesting is that these images came from MTG Arena, so we’ll take a look at the art and where we’re likely to see these.

The first image that we have is Atraxa, Preators’ Voice. Now, the art style of this piece is one that we’ve seen before, and that’s in the Streets of New Capenna artwork.

The other piece of art, in a similar Art Deco style is Breya, Etherium Shaper. These two commanders are really popular, both ranking in the top 20 on EDHRec. As for reprints, both of these commanders have less than a handful of printings. Atraxa is around $30, and Breya is about $7.

READ MORE: The Pros and Cons of an MTG Arena Dust System

Now these images were datamined from MTG Arena. This is a bit strange, but UmichMike notes that these image file names had “Cardback” in it, which means that they’re card backs. Outside of random drops in the shop, there’s a few places to get these cardbacks.

The first is from the Prepurchase bundles for sets. Usually, these card backs are reserved for characters from the set, which would mean that these two are in Streets of New Capenna if these were there. That’s probably not the case. The other place that you could get card backs is through Secret Lairs. This seems like a more realistic place where these cards will be.

This should mean that we’re going to get the other 4 color commanders from Commander 2016 in this secret lair as well.