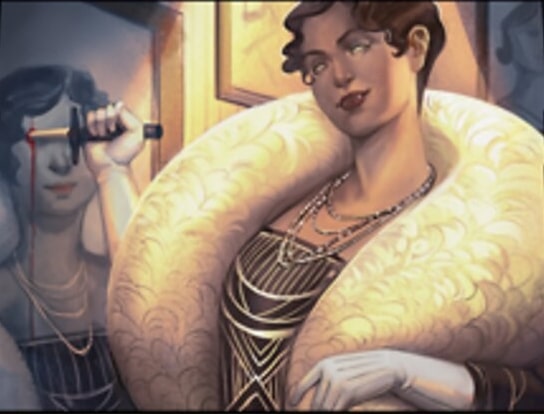 The MTG SNC Championship has just ended, and wow are there some fantastic stories to tell! We have everything from gigantic combos, a totally open meta and one player who brewed his way into the world championship.

I’ll start by showing the meta breakdown for what the tournament looked like. This is important when looking at the decks that put up good results. This meta is an entirely different one from Arena Ladder, or your FNM Standard, so just because a deck did well at the SNC championships doesn’t necessarily mean that it’s a good pick for your local meta. Remember this before you spend a ton of money making a deck that did well at the championships, and that deck seems to have bad results on other deck trackers. Sometimes this is due to pilot skill, like is the case for something like Jeskai Goldspan Storm, but more often than not, it was a deck designed to counter a narrow meta.

One Card to Break Them All

The first, and most important, thing I have to state is that you need to take these Standard results with a grain of salt. The SNC Championships had a lot of bugs, resulting in a lot of sets being decided by outside factors.

The biggest one of these was when David Inglis’s client crashed in his top eight winners match, ultimately causing him to lose the whole tournament. His opponent at the time, Jan Merkel, ultimately won the whole tournament. Other crashes involved both players in a set being awarded a win. Unfortunately, this really screwed up the race to worlds among challenger players.

While not all the issues were caused by this card, Fable of the Mirror-Breaker‘s animations caused crashes throughout the championship. These aren’t isolated incidents. I myself have lost a few games to my Reflection of Kiki-Jiki breaking the client before I could use it to break the game.

Don’t let this deter from how good the card is though. This card was a frontrunner for the SNC Championship, and will continue to be a multi-format all-star.

Now that the disclaimer has been announced, here’s the actual breakdown:

As seen from the sample breakdown here from Wizards of the Coast, Esper Midrange had a huge showing at the SNC Champs. This was by far the most popular deck, but the builds had a relatively large variation among them. For relevancy’s sake, we will only focus on the iteration of the deck that made it into top eight.

Naya Runes and Jeskai Storm follow up with the same amount of representation each. Naya Runes was a frontrunner in the last pro tour that ended up being heavily targeted by the rest of the meta. Spoiler alert: the same thing happened again.

Jeskai Storm is a combo deck that utilizes Goldspan Dragon and Lier, Disciple of the Drowned to abuse effects that target Goldspan Dragon and otherwise create treasure tokens. Show of Confidence is used to refuel mana to keep the combo going and, ultimately, create a gigantic Goldspan Dragon that will either kill its opponent personally, or get flinged by Kazuul’s Fury.

Most of these archetypes were players in the Standard meta before the championship. The biggest change to the meta after this tournament will likely be the introduction of Grixis Vampires from the CFB team.

Some of the archetypes that performed the best are included in the ‘others’ category. This includes Jan Merkel’s jeskai Hinata list, the best performing archetype overall during swiss for standard. Hisamichi Yoshigoe’s Naya Midrange brew is another archetype that isn’t listed in the breakdown (because it was a brew). I won’t touch on the Naya brew in this article, but a small breakdown of the deck can be found in our article here.

Here we have a pretty accurate breakdown from @mtgmetaio of how the swiss rounds played out for Standard. These numbers do not count the games that occurred in the top eight.

These results do a great job of summarizing what the meta was for the SNC Champs: incredibly midrange heavy. Any deck that preys on midrange decks (while also keeping Runes in mind) ended up performing very well. An important thing to note is that, unlike Wizards of the Coast’s meta breakdown, this chart splits Esper into two different archetypes.

Jeskai Control on this list is referring to Jeskai Hinata, which ended up winning the whole tournament. A lot of decks didn’t come prepared to interact with Hinata’s game plan super heavily. Sometimes this deck can have some trouble if they can’t get the Hinata/Magma Opus combo off. The meta was so slow that Jeskai Hinata had all the time to set up in the world.

Notably, the data concerning this archetype is of an extremely small sample size. This is due to how few players brought the deck. Another notability is how poor the deck did against Esper Midrange. It looks like, for the most part, Jeskai Hinata dodged the matchup completely. If more of these sets were played, the archetype may have had a worse performance. Esper Midrange and Esper Tempo have been listed as two different archetypes on this breakdown. Judging from their classification of top eight decks, its safe to say that Esper tempo refers to the lists with Raffine in them that play more creatures. Jeskai Hinata performed much better against this list.

There are some interesting card choices to talk about in the winning deck list. Any Commander players out there know how powerful March of Swirling Mist can be. When partnered with Hinata, you can select any number of targets just for one mana. This means that it can be used to protect your own creatures in the presence of a board wipe, and use it as a fog to either clear the way for lethal damage, or delay your own death. Using this on an opposing Goldspan Dragon before they can Show of Confidence to victory can also rob a game that you had no business of winning.

Make Disappear has not seen very much, if any, competitive play up to this point. Its essentially a Quench with a little more flexibility. Creatures in this deck are few and very valuable, so its rare that you will be paying Causality with this spell. Having the option is still nice. Maybe you counter a board wipe that would kill multiple creatures by sacrificing one of them instead. Either way, this is a great way to fill out your two mana removal spells. It’s very versatile as well, making it live in almost every matchup.

Piloting this deck can be somewhat difficult. If you’re looking for some examples Jan Merkel’s games throughout the tournament are a great start.

Grixis Tempo refers to the Vampires list that CFB’s team showed up with. This deck did a great job of playing the midrange game better than the other midrange decks did. Evelyn, the Covetous synergizes extremely well with the other creatures in this deck. Corpse Appraiser not only finds even more value with its ability, but it can also remove nasty creatures from your opponent’s graveyard like Tenacious Underdog. The vampire crew is rounded up by Bloodthirsty Adversary and Bloodtithe Harvester. Being able to flashback spells for tempo or for even more value ensures that this deck will win the midrange games.

This is another deck that goes out of its way to respect the Runes matchup. having access to four copies of Ray of Enfeeblement and three copies of Annul is pretty brutal. It does make sense though. This deck doesn’t have access to white, which means that they don’t have access to any major Runes hate. This is also the type of deck that Runes traditionally dominates. This can be hashed up to some good deckbuilding as a result. Annul is also capable of countering Esika’s Chariot and Fable of the Mirror-Breaker, making it an ok option against the GRx midrange piles running around.

An interesting card that is missing from this list is Expressive Iteration. The creature package seems to generate enough value on its own without needing the help. This also gives the unique angle of giving each value generator in the deck the ability to win the game on its own. This card does synergize incredibly well with Bloodthirsty Adversary, and I can see future lists playing this card.

By far the most represented archetype in the SNC championship, Simon Nielson piloted this deck to second place overall. This deck takes into account all of the stronger decks that made an appearance using sideboard cards already discussed in the article.

This deck takes the best of both worlds, using the aggressive Raffine game plan, backing it up with Planeswalkers in order to not fall behind. Notable absences include Obscura Interceptor, which is a departure from deck lists before the SNC championship.

I’m surprised there weren’t more basic lands in this deck. Izzet Control utilizing Cleansing Wildfire also performed very well at the MTG SNC championship. A few land destruction-related effects could be curtains for a deck like this. Esper Tempo does have enough small aggressive creatures that can force the control player to delay their gameplan in an attempt to answering yours. I would need to play the matchup myself to know whether running one basic land is correct or brave.

Ultimately, this is a new take on cards that we’ve seen before. This list should be used as a reference point for optimizing the archetype for Standard from this point on. You can expect to see a lot more aggressive strategies then what was seen in this tournament, and this deck comes prepared to deal with them.

Izzet Control also performed really well at the MTG SNC champs, but the matchups were rather polarizing. Whether or not this will be a winning strategy outside of a strict meta is something that time may tell. I think it will see a dip in performance, however. Grixis Vampires may push other midrange strategies (aside from Esper) out of the meta for the time being. Once people stop sideboarding for Runes, it will probably make a reappearance. Jeskai Storm will most likely always be viable. Piloting ability is going to be the decider here. Other archetypes on this list may disappear for a while, but Naya Midrange is going to see a surge in popularity. See why here.