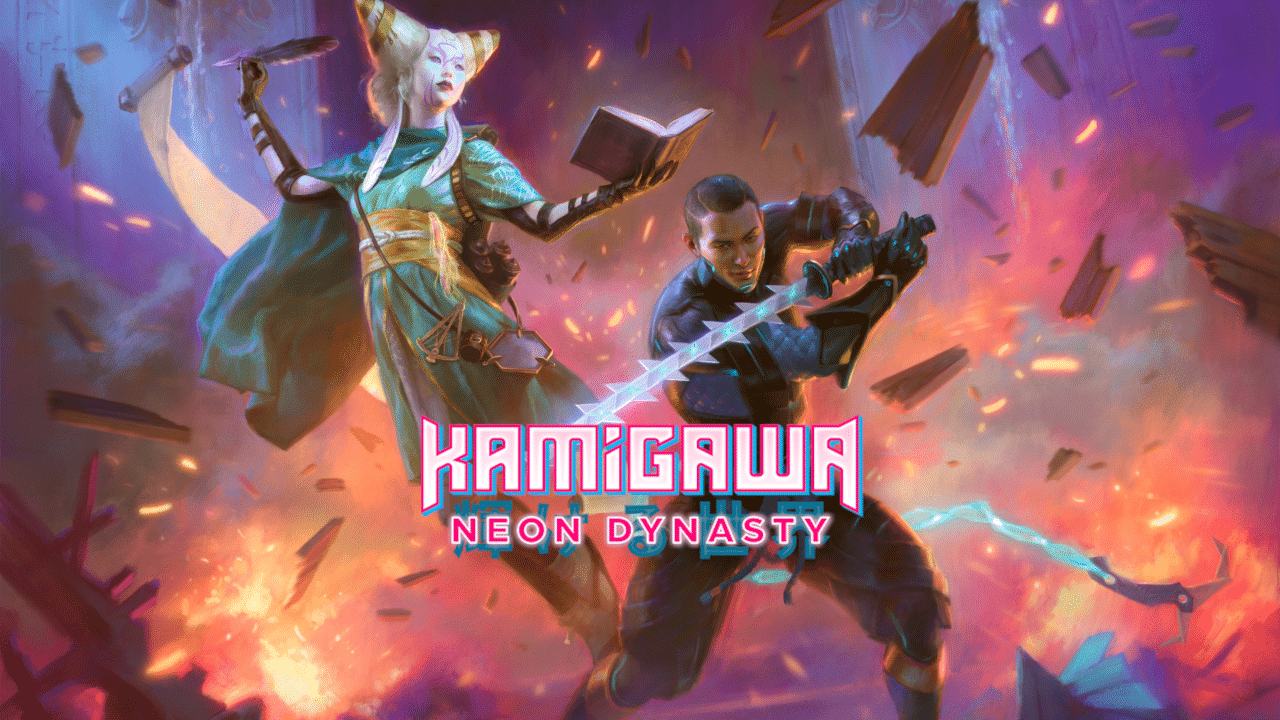 Kamigawa: Neon Dynasty just released on Magic Arena, and Prerelease is this weekend! If you’re heading to play in Prerelease, or want to get some drafts in online, then this limited guide will have you covered. This set is shaping up to be a very fun limited environment, so let’s dive into it!

There’s a few different mechanics that you’ll see in your limited, and often times we’ll be drafting around these. Here’s the list of mechanics you’ll see:

Not all of these will be main theme mechanics in your deck, but most of them can be.

This set’s limited environment is shaping up to have some very clear 2 color pairs, with a 3rd color splash available fairly easily as well. There’s a some very clear pillar cards that can lead you into an tribe, but some of those same pairs can be used more generically. Let’s look at the color pairs and what key cards you’ll want to look for.

Of note, In pack 1, It’s definitely important to be a bit flexible. You can pick up a keystone card for an archetype, but if you’re getting cut, you need to be able to pivot.

Boros is the color of Samurai primarily. For the Samurai, here’s a few cards you should be prioritizing.

One of the keystone for Samurai is Asari Captain. While this isn’t the most exciting uncommon, it leads you down the right path for Samurai. What may be even more important is Selfless Samurai. The Lifelink is very useful when you only attack with 1 creature, and the protection it provides is invaluable.

If we’re attacking with 1 creature, we have a couple things to take care of. First off, we need to buff up our main attacking creature, which we can do with Eiganjo Exemplar. The other thing that we need is to be able to set up defense with other creatures, and Peerless Samurai offers both good blocking, and a cost reduction for other creatures.

Dimir is the ninja color pair. We can also splash in Green as there’s some ninjas in that color. Here’s some important cards to find in this archetype.

Right off the bat, the keystone card is Silver-Fur Master. It’s a lord for our ninjas, and makes our Ninjutsu abilities cheaper. Next up is Moon-Circuit Hacker which is our new Ninja of the Deep Hours.

A couple of great cards that we will definitely want to make sure we can activate our ninjutsu abilities are Futurist Operative and Kaito’s Pursuit. Both of these cards have great abilities to make it more likely for our creatures to go unblocked.

If you happen to splash in green, there’s only a few cards that we should be picking up.

Fang of Shigeki is a great early game drop that is likely to get in due to it having deathtouch. Coiling Stalker is another cheap ninjutsu effect that can beef up some of our other creatures. Lastly, Kappa Tech-Wrecker has a good amount of utility here, as many of the creatures in this set are enchantments and artifacts as well.

Azorius’s theme is Vehicles. You can splash black here as well for a real boost in power. There’s a big focus on Vehicles in the set, so there’s a lot to choose from. Here’s a few of the key cards that you’ll want to pick up.

One of the Key cards for this archetype is Prodigy’s Prototype. It’s a great way to build a very wide board, and if you have a critical mass of vehicles, can really pump the damage up. Alongside this, you’ll want Hotshot Mechanic for easy crewing, and Mobilizer Mech which gives you a free crew when it’s crewed.

Kitsune Ace is an awesome pilot for our army of mechs, as it can give them first strike. Additionally, Skyswimmer Koi is a great support card, as we’re playing a fair number of vehicles, and it’s a great evasive body. Not pictured, but definitely you have to pick up a couple Mech Hangars, as it can animate our vehicles.

The flip side of Okiba Reckoner Raid gives our vehicles menace, which is a great buff. Okiba Salvage lets us reanimate a fallen creature or vehicle which can be handy.

Orzhov’s theme is a combination of Artifacts and Enchantments. They have various pay offs for controlling both.

The hallmark card of this archetype is Naomi, Pillar of Order. It helps us build a board state from just executing our gameplan, but is also a solid top end creature. Michiko’s Reign of Truth is a great saga, and the flip side is a creature that scales with the number of artifacts and enchantments.

Kami of Terrible Secrets is a great way to draw some additional cards and is a solid body for 4 mana. Assassin’s Ink is a fantastic removal spell in any black deck, but is especially good here.

Selesnya has a strong theme of Enchantments and Sagas. Sagas are huge in this set, as they turn into creatures.

Our hallmark card is Jukai Naturalist. Giving our enchantments a cost reduction is a STRONG effect to have. Coupled with that, Azusa’s Many Journeys is a great way to give us a bit of ramp, allowing us to cast multiple enchantments in a turn.

Storyweave is fairly underrated spell, but if you have a critical mass of Sagas, this can help get one of our fresh sagas flipped into a creature. Another great removal spell that we can play is Intercessor’s Arrest which can deal with creatures and vehicles efficiently.

Rakdos has an artifact sacrifice theme. There’s a lot of value cards here so here’s the shell of cards you’ll want.

First up, our main pay off card is Oni-Cult Anvil, which gives us constructs when we sacrifice an artifact, and offers a sac outlet as well. Additionally, Dockside Chef is a solid sac outlet that gives us cards.

Gravelighter is a great edict effect, and if we have some artifact creatures, they can be great sac fodder to trigger our payoff. Lastly, Voltage Surge is a fantastic removal spell that can deal with a fair bit of creatures.

Izzet has a more general theme of Artifacts. You’ll more than likely want to draft a few vehicles, but here’s a few other great cards to grab as well.

Similarly to Selesnya, having a cost reduction spell in Enthusiastic Mechanaut is great for our game plan. Reality Heist is a fantastic draw spell. Both Armguard Familiar and Twinshot Sniper are great creatures that sit well with our strategy.

Gruul’s game plan is to lean more into the Modified creature path. They have a fair amount of equipment and auras at their disposal to make this happen.

First up we want to have Invigorating Hot Spring, which gives our modified creatures haste, and let’s us make a creature “modified” with ease. There’s a few of these creatures that have modified pay offs, and a great one is Heir of the Ancient Fang. Definitely look for solid aggressive / midrange threats for this deck.

We get some good removal as well in this archetype with Kami’s Flare and Flame Discharge. Both can dish out some good damage on their own, but get better if we control a modified creature.

Both Golgari and Simic are color pairs that don’t really have a clear identity. They seem to line up with more solid midrange threats and have the flexibility to splash in other archetypes into their decks. I’d recommend trying to play to some ramp spells in Simic, as their only multicolored card, Colossal Skyturtle, is 7 mana. For Golgari, I’d look honestly to splash this into the Selesnya Sagas deck, as you get some very interesting options there.

READ MORE: Vehicles Are About To Become Absurd In Commander