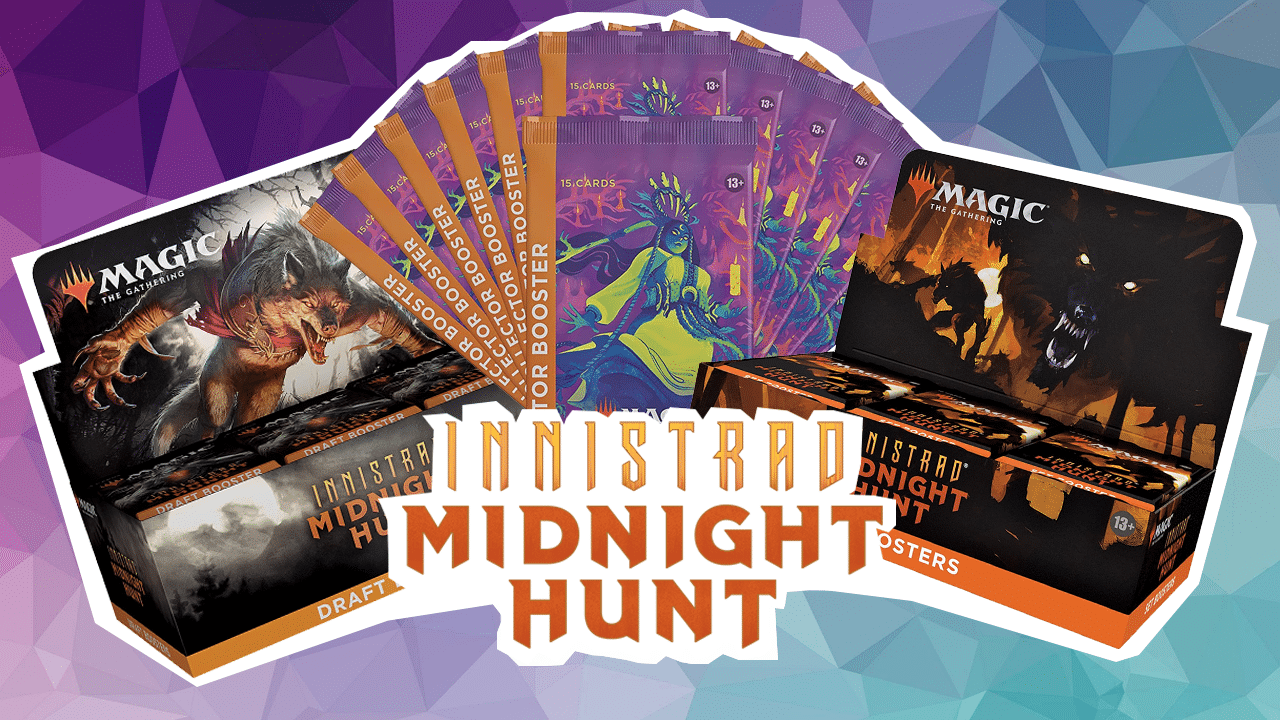 Grab yourself a release day deal to avoid disappointment! Don’t forget to yourself a deck box and sleeves in preparation for playing with the new cards!

MTG Set Boosters work a little differently from the traditional Draft Booster. You get 12 cards per pack with the cards following a theme. In the case of Innistrad: Midnight Hunt, you can open a Set Booster that fits around one of the many tribes — Werewolves, Humans, Zombies, and Vampires. You can build a thematic deck based on one of these tribes to play against friends.

In Set Boosters, you have the chance to open Borderless, Extended and other uniquely-looking framed MTG cards. For Innistrad: Midnight Hunt, there are the Equinox frame and Eternal Night frame, which offer a monochromatic feel to your favorite MTG cards. Also, you have the opportunity to open some Commander-exclusive cards borderless cards in Set and Collector Boosters, which won’t be available anywhere else!

These are ideal for players who just want that dopamine kick while cracking some booster packs. These are not meant for Draft or Sealed.

These MTG Collector Booster Boxes are the most high-end product you can purchase from Innistrad: Midnight Hunt. It comes with a bunch of foil cards, alternative frames, and unique art which is perfect for any card collector.

You do get 12 boosters in a box which may seem less than the Draft and Set boosters, but you are expected to open higher value and exotic cards instead. If you’re a collector of gorgeous foil MTG cards, then this Collector Booster Box is for you.

With the release of Innistrad: Midnight Hunt, the bundle contents are now changing. Instead of receiving ten Draft Boosters, you now get eight Set Booster instead. Set Boosters offer a more thematic pack, that could include extra rares, foils, and an art card. You get fewer boosters which may seem less value, but the Set boosters offer a higher ceiling on what you can open. Like previous bundles, you get 40 basic land cards, a spindown life counter, and a foil alternative-art card.

Bundles are ideal if you are looking to get started in MTG. With the addition of Set Boosters, you can build a deck with ease since these all follow a theme.

If you want to crack open a couple of MTG boosters without investing in a Booster Box, then the 3-Booster Draft Pack is for you.

The 3-Booster Draft pack is ideal if you want to play the Draft format with friends or you want to see what Innistrad: Midnight Hunt is all about before investing further.

The same is true for the Collector booster pack. Ideal if you want to see what the Innistrad: Midnight Hunt booster pack is all about without investing in a box.

Like with Adventures in the Forgotten Realms, there will be two pre-constructed Commander decks coming out alongside Midnight Hunt‘s release. The first offering is Undead Unleashed, which is the Zombie effort for this release. At the helm is Wilhelt, the Rotcleaver who focuses on the brand new decayed mechanic.

The decklists are revealed and we’ve already done an upgrade guide on how you can power these further on release.

The second offering is Coven Counters, which suggests a Human theme that falls into Selesnya colors. Expect a Human-focused theme with Leinore, Autumn Sovereign at the helm.

Like with the Undead Unleashed, we have an upgrade guide on Coven Counters if you want to throw some money into the preconstructed deck.