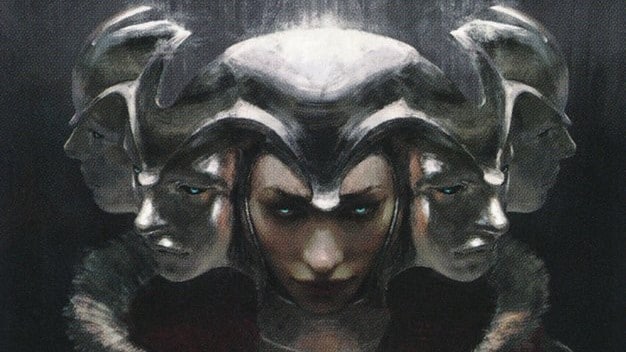 Helm Of The Host Should Be In Every Commander Deck

One of the joys of artifacts in Commander is that they can go into any deck. Well, the colorless ones can anyway. It means that there are some cards that should be an integral part of your deckbuilding process. Broadly speaking, these are normally cards like Sol Ring, or Arcane Signet.

However, those aren’t the only ones that you should be automatically including in your deck. There are a few other cards that should always be near the top of your list when considering a new build. While we’ve all no doubt got our own preferences here, we’re pretty sure that nobody can argue with Helm of the Host.

What is Helm of the Host?

Helm of the Host is an equipment card that was printed in Dominaria. It costs four mana to cast, and five mana to equip. That’s not a small investment at all, but it can also single-handedly win games for you in the right decks. Even in the wrong ones, it’s going to cause a big fuss.

The card reads, “At the beginning of combat on your turn, create a token that’s a copy of equipped creature, except the token isn’t legendary if equipped creature is legendary. That token gains haste.” Basically, it makes token copies of whatever it’s equipped to.

Having extra copies of a good card is useful in other formats, but in Commander, where you’re only really meant to have one of anything, it’s especially potent. Just in case you’re not sure why this is so powerful, let’s break it down for you.

What makes it so good?

Right, so, first of all, it being an equipment card means you can constantly shift it around as needed. This is especially true if you’re using a deck that thrives on equipment, because you’ll likely have a way to reduce the equip cost, and that’s a huge deal when you’re saving yourself five mana.

Next up, the tokens aren’t legendary, so you can put this on a legendary powerhouse of a creature and laugh. It also means you get both the enter the battlefield trigger every single turn, which is huge, as well as the chance to trigger additional attack triggers, because it doesn’t come in tapped and attacking. The token also has haste, which means you can attack if you want to, but it’s not forced to attack, so you can leave it up for defensive purposes too.

Finally, literally just this card on its own offers the threat of a combo. Combined with cards that offer extra attack steps, lets say like Aurelia, the Warleader, you suddenly have infinite attack steps. That’s basically impossible to stop unless you can kill the original creature, but even if they do manage to do that, you’ve still got a token ready to begin the process anew in the next turn, and that’s assuming you’ve got no other way to add in extra steps. It doesn’t have to be used as an aggressive card either, as copying Venser, Shaper Savant can easily offer you a tempo advantage. See, it’s good for everyone, just not your opponents.