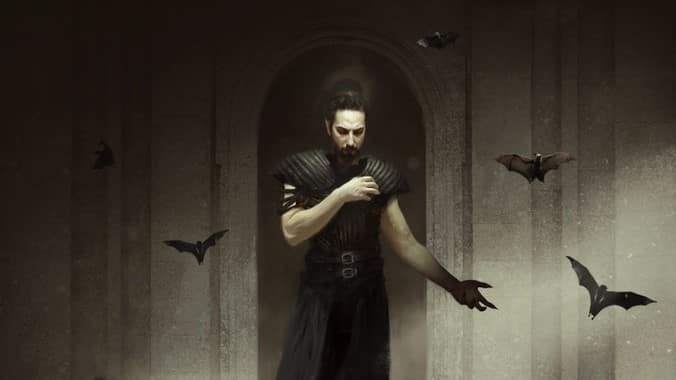 Dracula Is Yet More Proof That Wizards Can Nail Crossovers

Innistrad: Crimson Vow has been spoiled now, and along with a bunch of very cool cards, we’ve also seen more proof that Wizards of the Coast can do crossovers that are truly spectacular. We know this, because have you seen all of the excellent alternate art Dracula cards?

We’re obviously Bram Stoked (sorry) about this, and not just because we like cool alternate arts. In fact, the main reason we think it’s great, is because it once again shows that Wizards can do really good crossovers if they want to.

So much better than a Secret Lair

So, you’ll remember a short amount of time ago we were talking about how absurd the Stranger Things Secret Lair was. While we like a lot of the cards in it, it’s yet another example of the weird paywall that Wizards seems keen to introduce for long-time fans who like MTG.

Timed exclusivity is, in our opinion, bad for the game because it’s bad for players. Forcing people to decide whether or not they can afford early access to a set of cards leads to poor purchasing decisions, and makes the already expensive game of MTG even more so, by forcing people’s hands whenever a new timed exclusive is announced.

We understand that nobody has to buy these, but some people are predisposed to making less-than-stellar financial decisions, and products like this wreak havoc on them as a result. Making anything limited time is a ploy to get more sales, and while we understand that everyone’s got to make money, we’re generally against this forced scarcity style of sales pitch.

Read More: Mono-Black Is The Color To Beat In Commander

Dracula is here to stay

Instead, when we get the style of crossover we see here, and in the likes of Ikoria: Lair of Behemoths, you get alternate art versions of actual cards with other characters on them. While it’s not our favorite way to see crossovers, as that honor lies with the wonderful Adventures in the Forgotten Realms, it’s definitely notable better than the timed exclusivity nonsense of Stranger Things, and now The Walking Dead.

It means that collectors, or fans of the crossover property, can seek out these cards on their own with no issue, because a lot of them are in circulation due to them all being in Standard-legal sets. These are the sets that see the largest printing runs, which also means that these cards, while expensive sometimes, are often not as pricey as something like a Secret Lair might be.

It’s almost like salt in a wound to see a crossover handled like this immediately after the Stranger Things announcements. We can’t help but feel as though there’s some kind of internal rift between two different sides of Wizards. One side is clearly all-in on making the best possible game they can, and the other side is about making money. It’s probably always been the case, but it feels a lot more prominent at the moment, and these crossovers really highlight that.

Read More: Runo Stromkirk Is Going To Be A Blast To Play