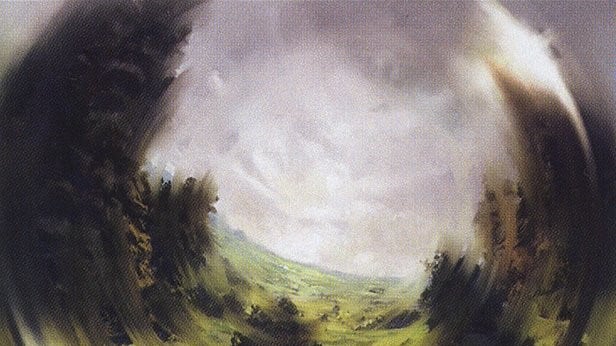 Once again we bring to you a card that’s a bit odd. We’ve mode beyond bad cards, as fun as they can be, and simply into ones that require a bit of thought to make work.

This week we’re going to be looking at a little enchantment that helps out your lands. Well, it also helps out everyone else’s lands too. Look, it’ll be worth it, so stick with us.

What is Terra Eternal?

Terra Eternal is a three-mana white enchantment that makes all lands indestructible. That’s it, that’s the card. This isn’t one with hidden layers, it’s not one with a surprising use, it’s just one that makes everyone’s lands hard to get rid of.

So, the only thing here is to make sure that we can get some use out of our lands. Thankfully, MTG is a game with a lot of ways to do that. Naturally, we need to stick to decks that have white in them, which means we can’t just go all in on the usual green land-based strategies, or at least not in a mono-green deck.

So, we’ve found two commanders that allow for some fun shenanigans when you’ve got Terra Eternal in play, and we think you’ll get a kick out of both of them.

First up is definitely the more obscure of the two options, but it also requires the least effort. Noyan Dar, Roil Shaper is a five-mana white and blue 4/4 that reads, “Whenever you cast an instant or sorcery spell, you may put three +1/+1 counters on target land you control. If you do, that land becomes a 0/0 Elemental creature with haste that’s still a land.”

In essence, the only thing you need to do here is to make sure that you fill your deck with instant and sorcery spells that will allow you to make the most of Terra Eternal, and then besiege your enemies with an army of incredibly large and terrifying land creatures. We’d definitely recommend you just put your favorite instant and sorcery spells in the deck, but it’s also worth putting in every single card that puts nonland permanents back in their hand like Consuming Tide, and also those that destroy nonland creatures like Planar Outburst.

The only other truly essential card in this deck is Halimar Tidecaller, a three-mana blue 2/3 that grants all of your land creatures flying. Naturally, while big land creatures that are also indestructible are a threat, giving them flying on top of all of that almost guarantees victory over most other decks.

We’re going to go ahead and recommend the most recent Omnath for this one. Omnath, Locus of Creation is a four-mana red, green, white, and blue 4/4 that lets you draw a card when it enters the battlefield. It also reads, “Whenever a land enters the battlefield under your control, you gain 4 life if this is the first time this ability has resolved this turn. If it’s the second time, add one red, one green, one white, and one blue mana. If it’s the third time, Omnath deals 4 damage to each opponent and each planeswalker you don’t control.”

The main aim here is landfall, which means you should also make sure to utilise cards like Omnath, Locus of Rage in your deck too. However, you could also choose to include the Noyan Dar, Roil Shaper strategy above in this deck too, if you so wish.

The main reason we chose this one though, is that it’s good to be able to use all of the cards that turn your lands into creatures, and a lot of those are in green. That means cards like Sylvan Awakening, and Nissa, Who Shakes the World are going to be able to not just make your creatures into threats, but also help make sure you can get the most out of the army of lands you’ve amassed. No matter which commander you go with though, this is a lot of fun.