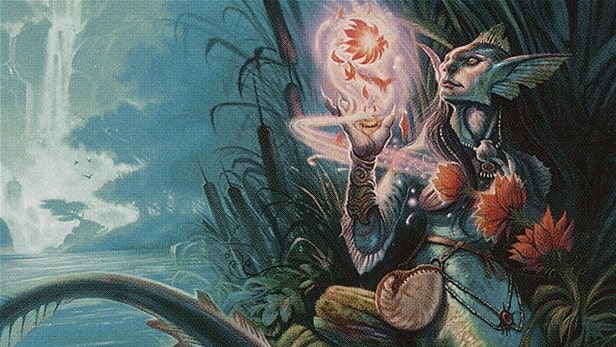 We’re back again with another card that doesn’t seem all that useful on the face of things, but you can more assuredly turn into something to be feared. Last week we talked about the Dragon Throne of Tarkir, but this week we’re going in a different direction.

This week we’re talking about the absurd card draw engine that is Forced Fruition. It can be a lot of fun drawing cards, so it’s only natural that a card that allows people to draw more cards is a good thing. Oh, except it doesn’t actually let you draw cards, which isn’t great.

What is Forced Fruition?

Forced Fruition is a six-mana blue enchantment that reads, “Whenever an opponent casts a spell, that player draws seven cards.” Now, there’s no obvious upside here unless you’re playing a group hug deck, which is a choice we respect, but it’s nice to be able to turn this into a good thing for you too, because otherwise, you’re just giving away resources.

The most obvious way to use card is to put it into a deck that’s committed to milling opponents out. While giving your opponents the best selection of cards they could possibly have isn’t ideal, it does also mean they’ll approach the bottom of their deck at a frightening rate.

However, that’s not what we’re going to be doping with it, because that’s too obvious. Instead, we’ve picked two commanders who can turn this card into something to be feared instantly, because that’s by far and away the most entertaining way to use any Magic card.

Read More: More Than Four Players In A Commander Game Is Hellish

First up is Nekusar, the Mindrazer. Nekusar is a five-mana blue, black, and red 2/4 that reads, “At the beginning of each player’s draw step, that player draws an additional card. Whenever an opponent draws a card, Nekusar, the Mindrazer deals 1 damage to that player.” It’s pretty obvious that Forced Fruition here is going to be a threat on its own, but we could also go a little further with the right cards.

The clear approach here is to use wheels to deal damage to your opponent and also possibly mill them out as a side effect. That means we want more cards that will deal damage when people draw cards, so both Underworld Dreams and Fate Unraveler will perform that role wonderfully. You can also lean into discard benefits like Waste Not and Megrim to make sure you benefit greatly when opponents discard cards, which they’re going to be doing a lot of.

Onto the wheels now. Dark Deal, Magus of the Wheel, Windfall, Reforge the Soul, and Wheel and Deal are all excellent choices on that front. We also love Jace’s Archivist here, because it’s a repeatable wheel that’s not too expensive to activate or cast. Also, if you’re more interested in a more efficient way of winning, you can just add in Peer into the Abyss, which has a player draw half the cards in their library and lose half their life in one go, which is sure to kill them off.

Xyris and an army of Snakes

The other option we’ve chosen is Xyris, the Writhing Storm, a five mana green, blue, and red 3/5 flying Snake Leviathan. They read, “Whenever an opponent draws a card except the first one they draw in each of their draw steps, create a 1/1 green Snake creature token. Whenever Xyris, the Writhing Storm deals combat damage to a player, you and that player each draw that many cards.” So basically, people draw cards, and you get snakes, it’s simple enough.

While you could certainly use a lot of the same wheels as above to make sure people are drawing cards here, and we don’t hate it as an idea, it’s also nice to use four cards to make sure you’re getting the most out of them creating tokens that are easy to kill.

Impact Tremors, Purphoros, God of the Forge, and Warstorm Surge all guarantee that whenever you make your Snake tokens you’ll also be able to deal damage to basically everyone and everything that you want to. However, given how often they’re going to die, you can also make sure you’ve got Outpost Siege out and choose the dragon option, so every creature that leaves the battlefield also deals one damage to any target. The combination of these cards means you can just sit there and kill everyone off just by having them draw cards, and then swing your Snakes in as often as you want with no issues.