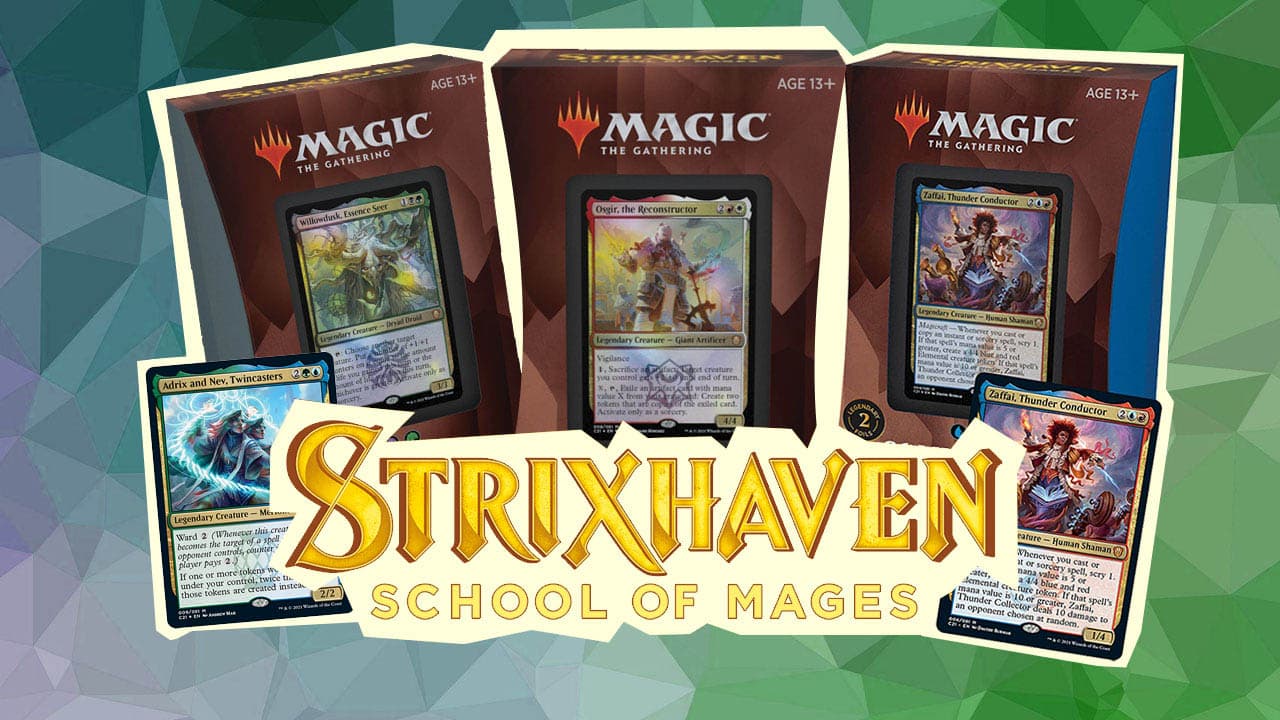 Commander (2021 Edition): Which EDH Deck Should You Get For Playing Magic: The Gathering?

Alongside this release, Strixhaven: School of Mages is available to purchase which is the new MTG set. If you’re looking for a deal on one of the new Booster Boxes, we have a round-up here!

If you’re wondering which Commander (2021 Edition) deck to go for, we’ve got everything you need to know right here.

Silverquill is the college of debate and word. Stylish, intimidating, and tirelessly competitive, these mages are born leaders with a razor-sharp wit and natural charisma. Unsurprisingly, you can use these abilities to dictate a game of Commander with the Silverquill Statement EDH deck.

At the helm of this cunning list is Breena, the Demagogue who encourages players to attack each other and not you. If you aren’t feeling Breena, the Demagogue at the helm of your Silverquill Statement deck, then you can run Felisa, Fang of Silverquill instead that offers a fun counters theme instead. There’s a lot of variety when it comes to these decks and you aren’t stuck into one particular theme.

If you want to start a debate at the table and keep all the cards, then Silverquill Statement is the deck for you.

At Strixhaven, Lorehold is the college of Archaeomancy. They’re passionate scholars obsessed with history, the students explore the past by poring over archaeological artifacts and summoning long-dead spirits. In short, they like digging old things up. With this, it translates very well into this Commander deck — Lorehold Legacies.

Leading the class is Osgir, the Reconstructor. Osgir ensures you can bring your cards back from the graveyard as copies onto the battlefield. You’ll want to generate as much value to get the most out of Osgir’s ability.

You can change it up from Osgir by running Alibou, Ancient Witness instead. Alibou is the traditional take we usually see in Red/White decks. You can go aggressive and end the game before it’s begun. There’s a lot of versatility within Lorehold Legacies and you’re never short on options.

If you’re a numbers person, you’re going to love Quandrix. Quandrix mages are math magicians. They study patterns, fractals, and symmetries to command power over the forces of nature. If you enjoy crunching numbers or saying ‘maths is for blockers’, then Quantum Quandrix is for you.

Quantum Quandrix is the Blue/Green Commander deck in Commander (2021 Edition). You’ll want to create as many tokens with Adrix and Nev, Twincasters at the helm. Think Doubling Season, but on a creature. You have the potential to swam the board with creatures leaving your opponents in ruin.

If you want to change it up, you can run Esix, Fractal Bloom that provides the option to copy creatures you control instead. All in all, there’s a lot you can do with the Quantum Quandrix Commander deck. You could say, the possibilities are endless.

Prismari is the college of art, performance, and passion. Mages express themselves through raw magical power, channeling the elements in their work. Within this theme, you have the Prismari Performance Commander deck which hopes to give you the flair to defeat your opponents.

Prismari Performance is the Red/Blue EDH deck in Commander (2021 Edition) that cares about slinging instant and sorcery spells. Leading the charge is Zaffai, Thunder Conductor who rewards you for playing big and silly spells. If you aren’t feeling the randomness that Zaffai provides, you can run Veyran, Voice of Duality instead which offers an aggressive approach. You can sling a bunch of cheap spells and end your opponents with ease.

If you’re one of those players that enjoys countering spells and playing big flashy spells of your own, then Prismari Performance is for you.

Hailing from the depths of Strixhaven is Witherbloom, the college of natural sciences. They draw power from the essence of living beings, whether that means enhancing nature or exploiting it. As you may expect, you can do this with Witherbloom Witchcraft, the Green/Black offering in Commander (2021 Edition).

Commanding this pre-constructed deck is Willowdusk, Essence Seer, a creature that allows you to grow your other creatures through gaining life. Alternatively, you can run Gyome, Master Chef instead that encourages a unique ‘Food matters’ theme. You keep the lifegain theme too, and who doesn’t want a Troll Warlock Chef as their Commander?

Witherbloom Witchcraft is jammed packed with desirable reprints and indvidually powerful EDH cards that are sure to see play in the format.

Not sure which of the MTG Commander (2021 Edition) decks you want? Then grab all five! You can grab Prismari Performance, Witherbloom Witchcraft, Silverquill Statement, Lorehold Legacies, and Quantum Quandrix for a discounted price.

If you only play Commander, then grabbing all five is a surefire way to keep you busy. It gives you plenty of cards to work with while having something different to play each time. Going further, it ensures a game of Commander can always fire as you can always lend a deck to a player. What’s not to love?