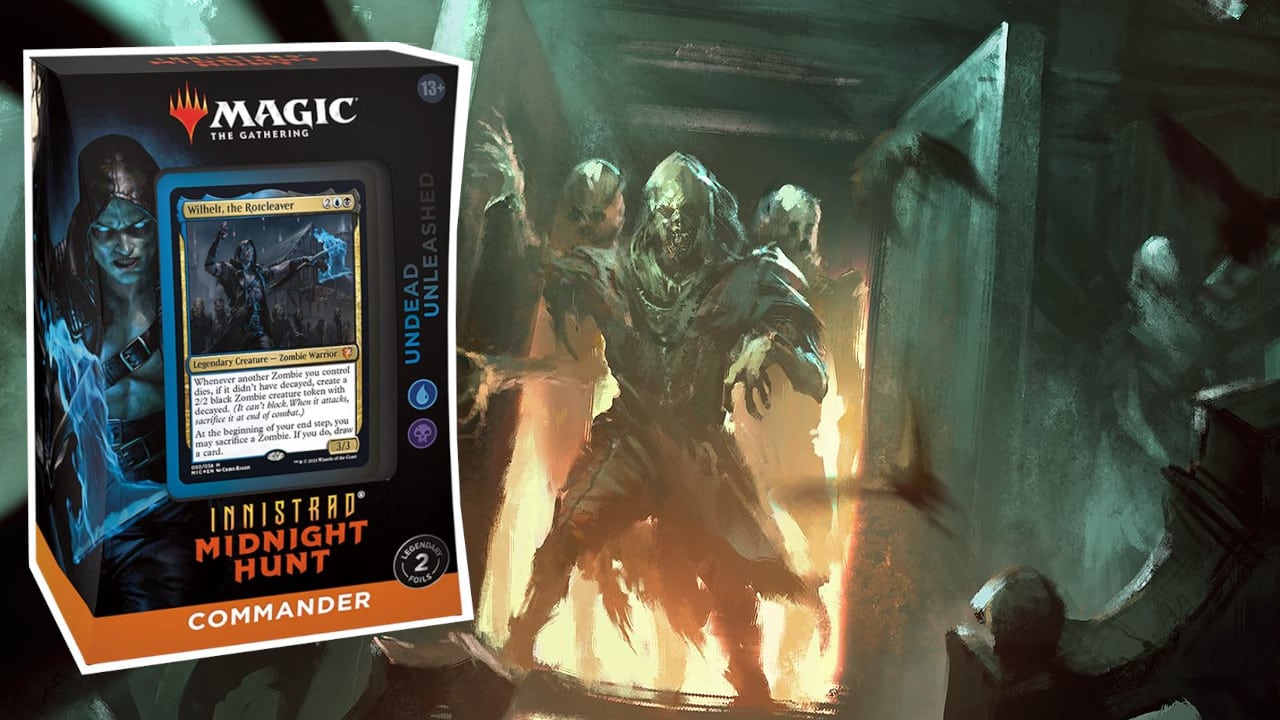 Alongside Innistrad: Midnight Hunt, Wizards of the Coast is releasing two preconstructed Commander decks, one centered around zombies, and the other around humans and +1/+1 counters. In this article, we are going to raise the dead as we look at the blue-black (Dimir) zombie deck, featuring Wilhelt, the Rotcleaver as its general.

When we know we are going to a plane like Innistrad, we know we can expect a few things, like vampires, spirits, humans, werewolves, and zombies. For this reason, it can be a good idea to buy into similar, older cards because they will inevitably gain new support. Theoretically, they should go up in price too! However, when we know that preconstructed Commander decks with the above tribal themes (excluding werewolves) will be released with the set, that means one thing: Reprints. Therefore investing in old vampires and zombies can be risky because WOTC could make them easily accessible to everybody.

But with the confirmation of the Undead Unleashed and Coven Counters decklists, we now know what is included in the decks, and what is not included. Zombies are a major tribe in Magic: the Gathering. They’ve been crawling around since the game’s inception. So there’d be no way Wizards of the Coast could include all of them in a single Commander deck.

These are some budgetary options to add to your Undead Unleashed deck, all under $10.00 at the time of this article. But please be aware that some of these budget options may not remain budgetary for long. There will be a wave of people wanting to upgrade their zombie Commander decks, causing a surge in these cards’ demand. Buy them soon.

This is one of the strongest zombies to come from our last trip to Innistrad in the set Eldritch Moon. For a single black mana, Cryptbreaker can fill your graveyard, make zombie tokens, and most importantly, DRAW CARDS.

Cryptbreaker will work especially well with Wilhelt, the Rotcleaver. The tokens that Wilhelt makes have decayed, a new mechanic that means they can’t block, and if they attack they will sacrifice themselves at the end of combat. They’re effectively immobile. But they make perfect targets to tap with Cryptbreaker and draw some cards.

Gravecrawler is a classic zombie from the original Innistrad block. This guy is never going to get any rest. For a single black mana, you can resurrect Gravecrawler from your graveyard over and over again.

For this reason, Gravecrawler is an ideal creature to sacrifice to Wilhelt, the Rotcleaver‘s ability in the end step to make sure you keep drawing cards every turn.

If zombies are good at one thing, it’s their resilience. They keep coming back from the grave. So why not bring back an extra creature every time you do that?

That’s where Prized Amalgam comes in. Once every end step, if you returned a creature from your graveyard to the battlefield, it comes with an extra 3/3 zombie.

Noxious Ghoul can serve as a one-sided board wipe when played in zombie dedicated decks. Every single zombie you play will shrink opposing creatures. The reason it works so well with Wilhelt, the Rotcleaver is because Noxious Ghoul doesn’t care if it is a token or non-token creature entering the battlefield for its ability to trigger. That means that every time a non-decayed zombie dies and Wilhelt’s ability triggers, if you have Noxious Ghoul on the battlefield, you can start killing all of your opponents’ creatures.

Tormod, the Desecrator synergizes with any zombie deck’s general gameplan. Return a Gravecrawler to the battlefield, it comes with an extra 2/2 zombie token. Got a Prized Amalgam to come back as well? Now that’s two 2/2 zombie tokens.

Tormod is a great budget option for Wilhelt, the Rotcleaver because Wilhelt will ensure that key zombie cards will be put into the graveyard each turn for you to get extra value with Tormod when you reanimate them.