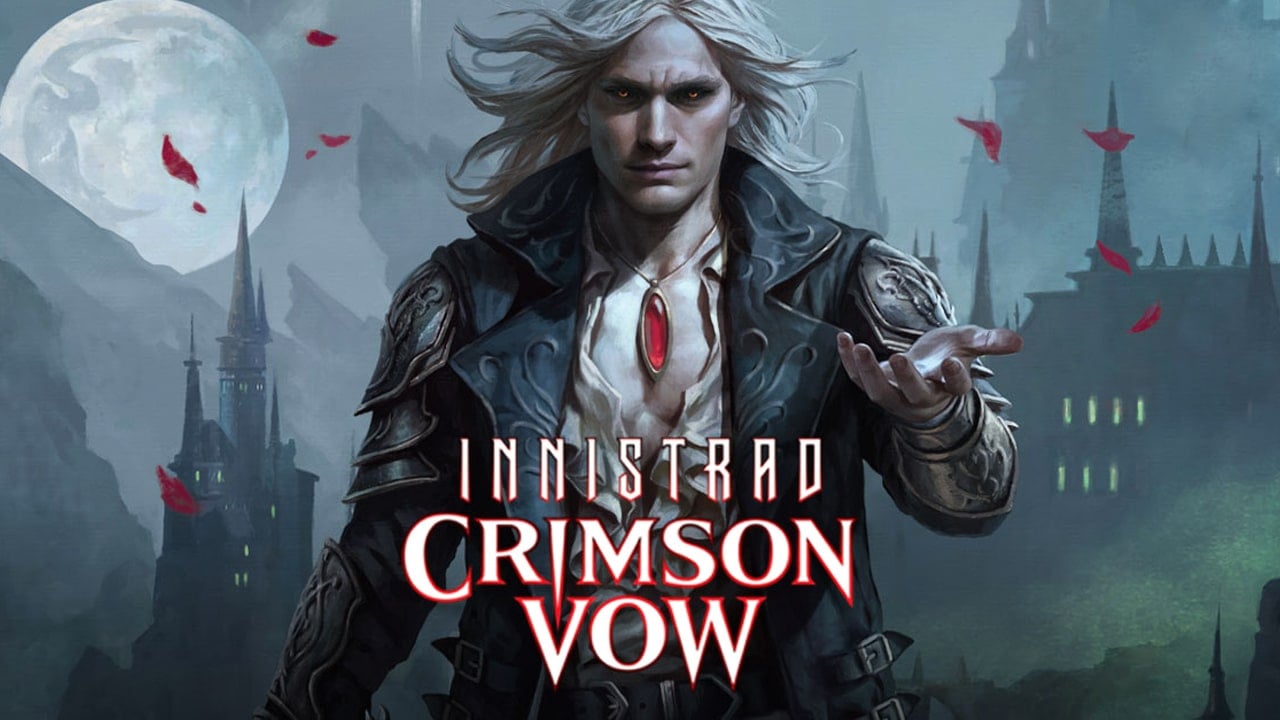 Now that Innistrad: Crimson Vow has been released, it’s time to review the set and unearth what we believe to be the 10 best cards for use in the Standard format. These will be cards that we can see changing the way current meta decks are constructed or just utter game-changers that will win you the match if they resolve.

This list is just what we believe to be the best options for Standard so we’d of course love to hear from you on your ten best cards. You can catch us over on both Twitter and Facebook!

We’ll quickly start by listing an honourable mention who was so close to making the list! The Avabruck Caretaker card earns instant love for being a green creature with Hexproof built-in. Beyond this, it fits the stompy green ethos beautifully as it can buff other creatures using two +1/+1 counters each turn.

When it becomes night, it transforms into Hollowhenge Huntmaster and gives all permanents hexproof! An unreal card that will be a big issue if it resolves. The only reason it just misses out is its six mana cost being a little on the high side. By the time it can enter a game, your opponent may be set up to deal with it quickly.

This Vampire creature card will be something special with a deck that can get the most out of it. When you play it for its initial three plus one Black mana cost, it’s a hearty 3/3 Soldier that can still do some decent damage. Once you pay its ability cost of one plus one Black you discard a card. When you do, Bloodsworn Squire gains indestructible until the end of turn but becomes tapped.

If you then have four or more creatures in your graveyard, you can transform the card. It then becomes Bloodsworn Knight, a card that has power and toughness equal to the number of creature cards in your graveyard. You can continue to pay the ability cost to discard a card and give it indestructible. It will, however, still become tapped.

This card, I believe, will be crucial in all White aggro decks moving forward. The Wedding Announcement card asks you to place a counter on the card and if you are attacked with two or more creatures in a turn, you can draw a card (White draw potential, unheard of!). Otherwise, you create a 1/1 white Human creature token.

Once the card has three or more countries, it transforms into Wedding Festivity which gives all creatures +1/+1. This can take what may already be a creature filled battlefield and kick it into overdrive. Paired with the likes of Paladin Class, Monk of the Open Hand and Clarion Spirit you’ll be stomping fools in no time.

I can see Voldaren Epicure being the lead out card for any Blood Token deck moving forward. As just a single Red mana creature, it not only creates a Blood Token when it hits the battlefield but it also does one point of damage to every opponent.

This also makes it a decent lead out card for Commander but I feel its worth is more than substantial as an early turn requirement for Blood/Vampire decks. It does a little bit of everything, immediate damage, a token and a creature to force your opponent into action.

Red decks will need not convincing to add Manaform Hellkite to their rotation because this 4/4 dragon is huge. Not only is it a four mana 4/4 with flying, but anytime you cast a noncreature spell you get to create a token where its power and toughness are equal to the mana spent casting the spell.

Yes, the tokens are exiles at the end of each turn but it only takes one turn with a spell-like Burn Down the House to be played and the game is all but lost. It’s going to be the centrepiece of many red aggro decks going forward and we can’t wait to see it in action.

Crimson Vow is an incredible set based on what we’ve seen so far but its Planeswalkers are on another level. Sorin, the Mirthless is a classic card in that it fits a very traditional style. His +1 is a draw, his -2 creates a creature (with flying and lifelink no less) and his -7 probably wins you the game.

We love this card for the fact it can easily be the building block for a deck but also slide seamlessly into existing decks like Mono-Black Control. We’ll certainly be trying him out in place of Professor Onyx thanks to the fact that he’s two mana cheaper to cast!

Kaya returns in Crimson Vow and takes on the form of the Geist Hunter. This powerful Mythic Planeswalker is one of the best in a very powerful set. She’ll slot nicely in many Orzhov decks and the -6 ability is easily a win condition late enough into any game.

What’s most unique is probably her -2 ability as it allows you to duplicate tokens created that turn which could pair very well with cards like Clarion Spirit or Starnheim Unleashed. Kaya, Geist Hunter feels like a card that can see you through to victory and only comes in at a three mana cost.

Okay, so, we definitely didn’t pick this card because we immediately heard the Buffy theme tune in our head when we saw its name! Vampire Slayer will be a crucial defensive card against the heavy Vampire set that is Crimson Vow.

Despite only being a 2/2, any time it touches a Vampire, it’s destroyed. If you manage to buff this with Luminarch Aspirant or even a Guiding Voice, it could become a real menace. Maybe it’s a little situational but Vampires will become just as prominent as Werewolves when the set releases so it’s justifiably one of the better cards in the set despite only being a common card.

Next up is Welcoming Vampire, another white cornerstone card being added with Crimson Vow. We’re finally getting the draw potential we need in White decks and it could become a new meta with the set’s release. Welcoming Vampire will allow you to draw a card anytime a create entered the battlefield under your control and has less than 2 power.

That’s incredibly easy to achieve with White and even though it only triggers once per turn, it offers some great draw potential that could snowball into some devastating turns if not dealt with. Its toughness also means it’s not vulnerable to smaller damage spells and its mana cost prevents it from being taken out by something like Portable Hole.

Dreamshackle Geist is a pretty crazy all-around Blue beast of a card. It’s a 3/1 flying creature that has an ability that triggers at the start of every combat turn you take. You can choose to tap a target creature or prevent a tapped creature from untapping during the opponents next untap step.

There is a level of battlefield control that this card offers which is unmatched by anything else in the set. If your opponent can’t deal with it quickly, they’ll be endlessly frustrated as you tap big creatures or prevent blocks turn after turn.

Reclusive Taxidermist, or its Quincey Harker alternative art, is another brilliant but annoying Green stompy card. Despite starting out at a 1/2, as long as you have four or more creatures in your graveyard, it will buff to a 4/4.

Not only that, but it has early game versatility because you can tap it to add one mana should you be running short, want to ramp quickly to a huge beast or, let’s face it, get Esika’s Chariot out as soon as possible. The only issue you’ll have is what to take out of your deck to fit it in.