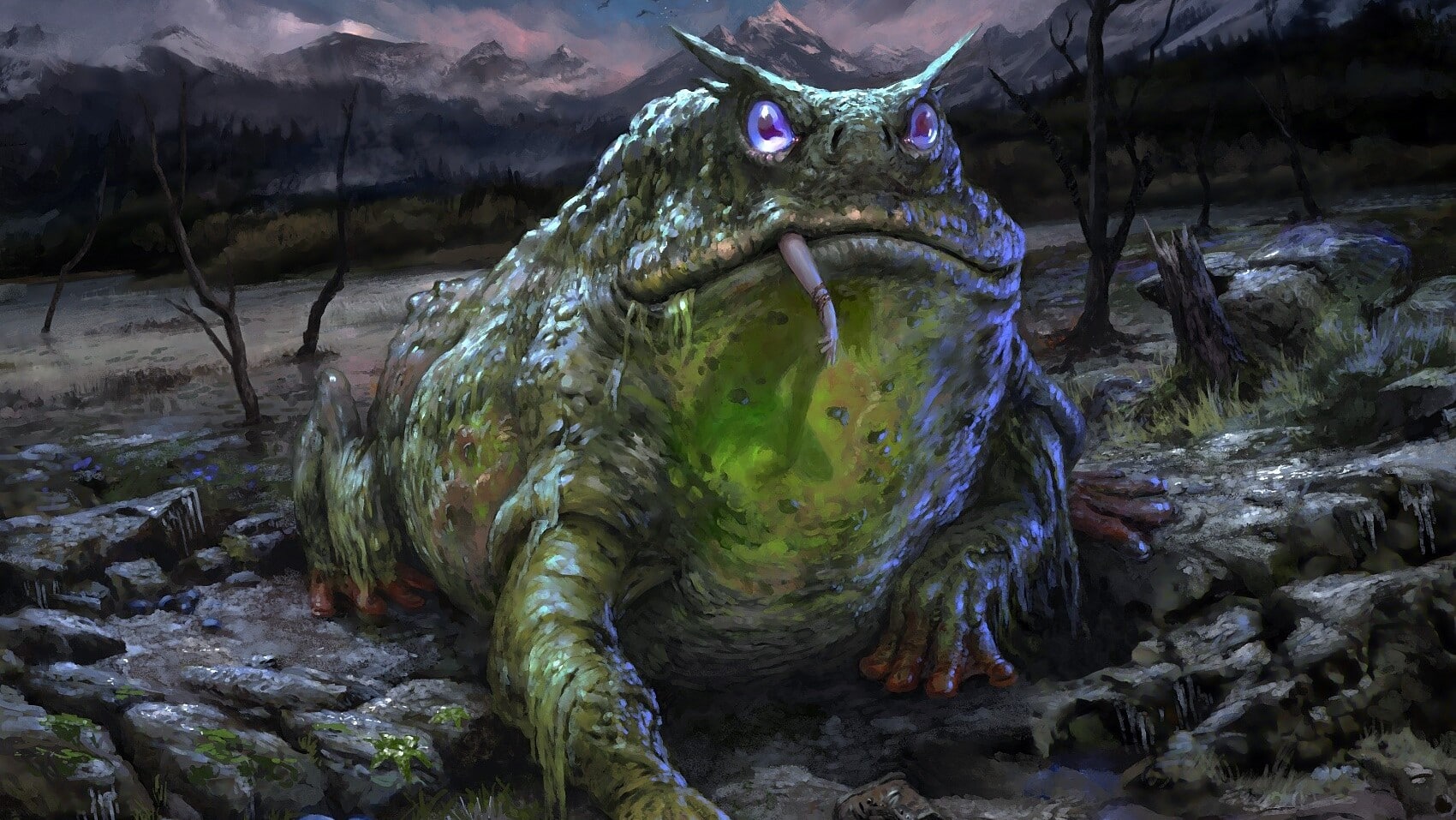 We all know what you’re looking for really. Sure, tribes in MTG are great, and we’re always happy to play a good tribal deck, but sometimes the only thing anybody really needs is a big old Frog. It’s hard to resist their croaky charm, and the sheer joy you’ll feel when hopping over a more powerful tribe is going to be worth the extra effort.

Thankfully, we now have a big old Frog who cares about other Frogs. That’s right, now is the age of Grolnok, the Omnivore, and we couldn’t be happier about it.

Grolnok, the Omnivore is a four-mana green and blue 3/3 with a lot of text. “Whenever a Frog you control attacks, mill three cards. Whenever a permanent card is put into your graveyard from your library, exile it with a croak counter on it. You may play lands and cast spells from among cards you own in exile with croak counters on them.”

So, we’re going for a Frog tribal deck with a splash of self-mill. It’s a really fun concept, and while we’d rather this was a Sultai card so we could also include the almighty The Gitrog Monster, we’ll take what we can get. Although, please give us a big old Sultai Frog, thanks.

Now then, let’s take a look at the cards we’re going to be including in our fancy froggy fun.

Froghemoth is our first pick. Honestly, the number of worthwhile Frogs in MTG is annoyingly low, but that doesn’t mean there aren’t a few really good choices here anyway. Froghemoth does a lot too, as a five-mana 4/4 with trample and haste that reads, “Whenever Froghemoth deals combat damage to a player, exile up to that many target cards from their graveyard. Put a +1/+1 counter on Froghemoth for each creature card exiled this way. You gain 1 life for each noncreature card exiled this way.”

Outside of that, the only other Frog that’s essential is Spore Frog. This little bad boy can be sacrifice to allow you to negate all combat damage for a turn, which is great. That’s pretty much it for Frogs as such, so we’re going to get creative now.

Croaking Counterpart will create a token of any creature but as a 1/1 Frog. This means you can gain powerful abilities and ETB effects. It’s also worth looking into a good clone suite here too. Stunt Double, Followed Footsteps, Altered Ego, and Vesuvan Shapeshifter are all great choices for this. You could also just use a Maskwood Nexus to make everything a Frog.

Read More: Runo Stromkirk Is Going To Be A Blast To Play

In terms of support, we’re looking at ways to recur things that are in the graveyard, and then ways to protect Grolnok. Eternal Witness and Timeless Witness are both incredible for picking a specific card to get back. Splendid Reclamation will allow you to put all of your lands back into play too. They’re not as useful as in some other self-mill decks, but they’re still strong.

Self-mill has a lot of options. We really like Crawling Sensation here for being so simple to cast and also generating Insects. Perpetual Timepiece is also surprisingly strong for similar reasons, but without bugs this time. You could even look to play some dredge cards liken Life from the Loam for a bit of extra spice.

Protection is a big factor here, so the likes of Lightning Greaves, Whispersilk Cloak, and Asceticism are all going to be excellent choices for keeping poor old Grolnok alive. We already like the look of this deck, but we’re also hoping that Frogs get a bit more support in the coming months from other sets, because everyone loves a good ribbit, you know?